The dose makes the poison

One of the most fundamental concepts in pharmacology and/or toxicology is the dose-response curve, which gives a graphic representation of how the human body responds to varying doses of chemicals.  Something that is often poorly understood by laypeople, but becomes obvious if you study the topic at any length, is that there are some substances (e.g. lead) which are unsafe at any dose, and others that are necessary at low doses but toxic at high ones (e.g. table salt).  Further complicating the matter is that some substances bioaccumulate -- small doses over a long period of time can cause a toxic increase in the body tissues.  Elemental mercury, for example, doesn't get excreted readily, so even small amounts over a long period can result in harm (giving rise to "mad hatter syndrome" if sufficient quantities are ingested).  Others are water-soluble and quickly cleared by the kidneys, so it takes a great deal more to result in harm (e.g. vitamin C). 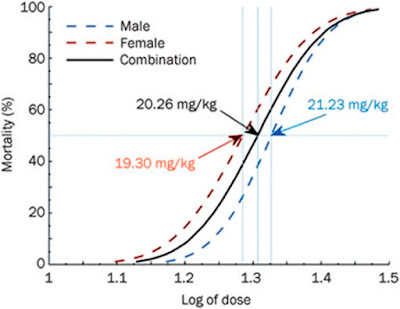 So the subject isn't simple.  But if you're going to read anything on toxins and (especially) vaccines, you damn well better do your homework, or you're likely to get suckered by articles like the incredibly bullshit-dense "The 7 Most Dangerous Vaccines Injected Into Humans and Exactly Why They Cause More Harm Than Good" that appeared over at Natural News a few days ago.

The article, written by S. D. Wells, would be the same tired old "chemicals = bad" nonsense trotted out by damn near everyone in the alt-med world, from Vani "Food Babe" Hari to Mike "Health Ranger" Adams, except for the fact that Wells starts going into specifics about which chemicals in vaccines are bad, why, and at which doses.  Which is unfortunate for Wells, because any time these people slide over into analysis of the facts, they immediately start making claims that anyone who passed high school chemistry would know immediately are false.

Let's start with my favorite line in the whole thing, which is how the MMR (measles, mumps, rubella) vaccine contains sodium chloride, which "raises blood pressure and inhibits muscle contraction and growth."  Yes, sodium chloride, i.e., plain old table salt.  He also tells us that another vaccine, Gardasil, contains this dreaded toxin at nearly 10 micrograms.  If you can imagine.

For comparison purposes, the Recommended Daily Allowance for salt is 4 grams.  To save you from doing the math, this means that the Gardasil vaccine contains 1/400,000th of the salt you ordinarily get from your food.

But in the words of the infomercial, "Wait!  There's more!"  Gardasil also contains 35 micrograms of sodium borate, which Wells tells us is a chemical used to kill cockroaches.  What he doesn't tell us is that borate is another micronutrient in the human diet, and is only toxic at huge doses -- at least huge compared to what's in Gardasil.  Again consulting the Recommended Daily Allowance tables, the RDA for boron is 1 to 6 milligrams -- about a hundred times what you get from Gardasil.

Wells doesn't just mislead and/or lie outright about the chemical constituents of vaccines, he lies about their side effects.  Gardasil, we're told, has horrific results; he says, "many girls who get the HPV vaccine beginning at age 9 for a sexually transmitted disease (diseases they dont [sic] have) go into immediate anaphylactic shock and some into comas and die."  Which is simply untrue; a study in 2012 of 189,000 girls who had been inoculated with Gardasil showed that the most common side effect was same-day syncope (i.e., they fainted), and even that was uncommon.  If that's not enough, a study of a million girls in Denmark was so side-effect free that the authors concluded that there was “no evidence supporting associations between exposure to qHPV vaccine and autoimmune, neurological, and venous thromboembolic adverse events."

But back to Wells.  Another horror he trots out is monosodium glutamate in the MMR vaccine.  If you're wondering if this is the same chemical that's used for a flavoring in Chinese food, yup, that's it.  It's also the sodium salt of one of the most common naturally occurring amino acids, and is found in tomatoes and cheese, not to mention General Tso's chicken, in quantities that are orders of magnitude more than are in the vaccination.  Then we have polysorbate 80, which Wells claims causes sterility even though it's used as an emulsifier in ice cream and a study on rats who were fed polysorbate 80 at a quantity of 0.5% of their body weight per day showed no adverse effects whatsoever.

I did get a good belly laugh at Wells's horrified statement that the swine flu vaccine contains "inactivated H1N1 virus."  After I finished laughing, I shouted at the computer screen, "How the fuck do you think vaccines are made, you nimrod?  What do you think they contain?  Holy water and magic berries?"

Then we have the wizened old claims about vaccines and mercury, even though the only vaccines that still contain thimerosal (a mercury-based stabilizer) are multivalent flu vaccines, and the stabilizer breaks down quickly to ethylmercury which is quickly cleared from the body by the kidneys.  (A lot of the confusion over mercury toxicity comes from mistaking this compound for methylmercury, which is toxic, bioaccumulates, and causes progressive nerve damage.)

And so on and so forth.  It's the same old, same old, really, but this was such an amazingly dumb example of anti-vaxx rhetoric that I thought it worth debunking.  As for me, I'm going to go look up the dose-response curve for bullshit, because I think reading Wells's article may have given me a fatal dose.
Posted by Gordon Bonnet at 2:54 AM