A loyal reader of Skeptophilia commented a few days ago that given the uproar currently happening in the United States and elsewhere, it'd been a while since I had the opportunity to comment upon important matters such as recent sightings of aliens and Bigfoot.  So just to show that I am not shirking in my duties in the wacko news department, today we have: a sighting of Mothman in Point Pleasant, West Virginia.

What is interesting about this, besides the immediate "what the hell?  Mothman?" factor, is that Point Pleasant is the place where there was a rash of Mothman sightings exactly fifty years ago.  And I do mean exactly; the peak of sightings was in November and December of 1966, although sporadic reports did continue to occur until the following December, when the Point Pleasant Bridge collapsed, resulting in 46 deaths.  Structural engineers say that the bridge collapse was caused by the failure of an eyebar in the suspension chain, but those who are in the know about such matters tell us that it was clearly Mothman's final hurrah.

From there, the Man went into seclusion, with only widely scattered sightings over the following decades.  But it looks like things may be ramping up again, because just last week, a Point Pleasant man took a video from which the following still is excerpted: 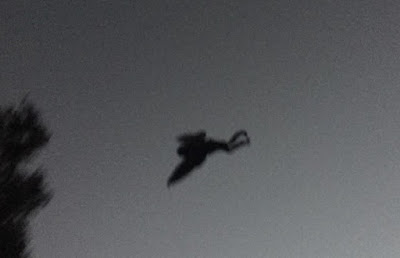 The man claims that he had only "recently moved to Point Pleasant" and "didn't even know about the legend."  So that's all I need.  I think this constitutes what those of us in the Science Business call "airtight proof."

Yeah, yeah, okay, so maybe not so much.  As Neil deGrasse Tyson puts it, Photoshop these days probably comes equipped with an "add UFO" button.  And most serious analysts think that the original reports were the result of a combination of hoaxes, sightings of large birds (such as barn owls), and liberal amounts of alcohol.  But still, you should go to the original link (which is to Sharon Hill's wonderful site Doubtful News) and take a look at the video.  The video not only shows you the entire clip from the anonymous man who shot it, but some interviews with true believers in Point Pleasant, of which there are apparently quite a few, including Carolin Harris, who owns the "Mothman Diner" and Jeff Wamsley, who runs the "Mothman Museum."

So of course, I'm sure that this has nothing to do with tourism and publicity and attracting crowds to Point Pleasant on the fiftieth anniversary of the original Mothman craze.  Nothing whatsoever.  Nope.

Anway, other than this, I haven't been hearing much from the cryptozoological crowd.  My guess is that given the current political situation, Bigfoot might well be packing his bags and leaving the country to join his cousins in Nepal.  After all, given how precarious things are for actual people in the United States these days, I wouldn't want to be a hairy proto-hominid.  Even the plain old humans are worried enough about their rights.
Posted by Gordon Bonnet at 2:02 AM