The risks of paltering

In Richard Feynman's brilliant autobiography Surely You're Joking, Mr. Feynman!, he tells the story of his experience as an undergraduate practical joker.  One day while his fraternity brothers were asleep, he took one of the frat house doors off its hinges and hid it behind the oil tank in the basement.  Of course, when the theft was discovered, everyone wanted to know which of them had pilfered the door.  Everyone denied it but Feynman:


I was coming down the stairs and they said, "Feynman!  Did you take the door?"

"Oh, yeah," I said.  "I took the door.  You can see the scratches on my knuckles here, that I got when my hands scraped against the wall as I was carrying it down into the basement."

Knowing Feynman to be a wiseass, everyone rolled their eyes and assumed he was lying.

The door stayed missing, and still no one confessed.  (Well, actually, someone had, of course!)  Finally the president of the fraternity was so miffed that he called a general meeting at dinner time and asked each member to swear on his word of honor whether or not he'd taken the door:


So he goes around the table, and asks each guy, one by one: "Jack, did you take the door?"

"Maurice, did you take the door?"

"Feynman, did you take the door?"

"Cut it out, Feynman, this is serious!  Sam: did you take the door..."  It went all the way around.  Everyone was shocked.  There must be some real rat in the fraternity who didn't respect the fraternity word of honor!

That night I left a note with a little picture of the oil tank and the door next to it, and the next day they found the door and put it back.

Some time later I finally admitted to taking the door, and I was accused by everybody of lying.  They couldn't remember what I had said.  All they could remember was their conclusion after the president of the fraternity had gone around the table and asked everybody, that nobody admitted taking the door.  The idea they remembered, but not the words!

I always use this story in my Critical Thinking classes to spur a discussion into the nature of lying.  Was Feynman, by deliberately telling the truth so unconvincingly that no one believed him, actually guilty of lying?

I didn't know until yesterday that this practice actually has a name: misleading by telling the truth is called paltering, and was the subject of a study released just last week in the Journal of Personality and Social Psychology.  Called "Artful Paltering: The Risks and Rewards of Using Truthful Statements to Mislead Others," the study (by Todd Rogers, Richard Zeckhauser, Francesca Gino, and Michael I. Norton of Harvard, and Maurice E. Schweitzer of the University of Pennsylvania) shows that paltering works -- but it comes with a cost. 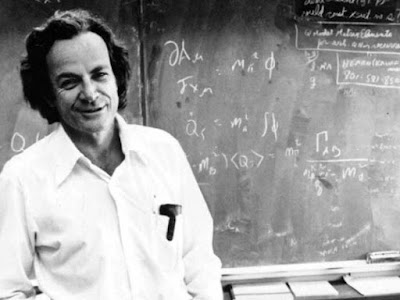 Their experiment presented volunteers with a variety of scenarios in which people are represented as lying outright, misleading by omission, and misleading by paltering -- telling the truth in such a way as to mislead.  The scenarios included negotiations for a car purchase, negotiations over the sale of a piece of property, and negotiations over the development of a piece of property for commercial use.  The results were strikingly uniform; lying outright was considered the most unethical, but paltering was close -- especially when the palter was made in response to a direct question (as it was in Feynman's case).  The authors write:


Taken together, our studies identify paltering as a distinct and frequently employed form of deception. Paltering is a common negotiation tactic.  Negotiators who palter claim value but also increase the likelihood of impasse and, if discovered, risk harm to their reputations.  This latter finding suggests that those who might view paltering as a (deceptive) strategy for claiming more value in a negotiation must be cautious.  It may be effective in the short-term but harmful to relationships if discovered.

Which is exactly what Feynman discovered.  People are much more likely to focus on the results and the intent -- they care less about the actual words spoken.  So a palterer who says after being found out, "But I told the literal truth!  It's not my fault you interpreted it wrong!" is not likely to gain much in the way of credibility.  In fact, they are generally looked upon as only a tiny notch above someone who told a bald-faced lie.

This does open up an interesting question, though; to what extent is it incumbent upon the recipient of information to be smart enough (or do enough research) to detect when lying or paltering is occurring?  I'm not trying to blame the victim, here; but the principle of caveat emptor has been around for millennia, and I have to admit that I tend to lose sympathy with someone who got hoodwinked when a bit of quick research could have uncovered the deception.  As with everything in the realm of ethics, there are no easy, hard-and-fast answers.  But it's nice to have a word to put on lying-by-telling-the-truth,  and it gives us one more thing to be on the lookout for in car negotiations, real estate purchases -- and political discussions.
Posted by Gordon Bonnet at 1:54 AM