People on the left side of the political aisle are currently engaging in a good bit of gloom-and-doom prognostication.  I try not to make predictions -- I've found that almost always, such attempts to look ahead don't work.  The universe always seems to have surprises in store for us -- some of them far better than we'd hoped, others far worse than we'd feared.  In any case, foretelling the future is generally a losing game.

This time, though.  I dunno, folks.  2017 is looking pretty dire.  I say that not as some kind of political pundit, which heaven knows I'm not.  I'm saying this because...

... the blood of St. Januarius didn't liquefy a couple of days ago.

St. Januarius is an interesting figure, largely because there's a huge and complex story about him even though modern historians are uncertain whether he ever existed.  The short version is that he was a third-century holy man who helped out Christians during the reign of the virulently anti-Christian Roman Emperor Diocletian, and for his trouble got shoved into a fiery furnace (that didn't work), thrown into a pit filled with wild bears (that didn't work either), and finally beheaded (that worked).  The earliest historical sources that mention him date to the sixth century, so right there it casts a little doubt on his life history, even if you don't count the miracles. 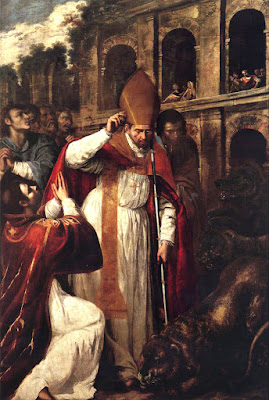 The Martyrdom of Saint Januarius (1631), by Artemisia Gentileschi [image courtesy of the Wikimedia Commons]

Fast forward to 1389, when a relic of St. Januarius showed up in Naples, Italy (where he is known as St. Gennaro).  It was a vial of the saint's blood, obtained when he was beheaded in 305 C. E. or thereabouts.  Where it had been for a thousand-odd years is anyone's guess, but it was immediately revered as a holy relic, especially when it was found that the blood spontaneously liquefied three times a year.

Skeptics have speculated for some time about how the whole liquefaction thing happens.  Robert Todd Carroll, in The Skeptic's Dictionary, said that the "miracle" can be duplicated using a mixture of chalk, hydrated iron chloride, and salt water, and was due to a property of certain liquids called thixotropy -- they become less viscous the more they're shaken, stirred, or agitated.  (A common example is ketchup.)  So predictably, my thought is that it's a non-miracle that relies on purely natural physical properties of whatever it is that's in the vial.

But of course, the true believers don't like that idea.  Especially now that (gasp) the blood didn't liquefy on schedule.  They say that this only happens when a disaster is about to strike -- such as in 1631 (before an eruption of Mt. Vesuvius), 1939 (right before World War II), 1943 (when Italy was occupied by the Nazis) and 1980 (right before an earthquake struck).  Of course, those are hardly the only bad things that have ever happened, so one has to wonder how many times the blood liquefied and something awful followed, or didn't liquefy and there was a disaster.

This hasn't stopped people in Naples from panicking, of course.  The Catholic powers-that-be have tried to calm everyone, to little effect. Monsignor Vincenzo De Gregorio, Abbot of the Chapel of the Treasure of San Gennaro, said, "We must not think of disasters and calamities.  We are men of faith and we must pray."

Or, possibly, stop believing in medieval superstitions and look for rational explanations for stuff.  That could work, too.

Of course, apparently the saint has been giving us hints of disaster all year.  When Pope Francis visited the Chapel earlier this year and said the Lord's Prayer over the vial, the blood only "half liquefied."  Whatever that means.  Archbishop Crescenzio Sepe said of the event, "The blood has half liquefied, which shows that Saint Januarius loves our pope and Naples."

The pope wasn't quite so sanguine.  "The bishop just announced that the blood half liquefied.  We can see the saint only half loves us.  We must all spread the Word, so that he loves us more."

Righty-o.  And now the blood didn't liquefy at all, which means St. Januarius doesn't love us at all, or (according to the legend) that something really dreadful is about to happen.

I'm not going to lose any sleep over it, however.  Given the world's current state, something really dreadful is pretty likely to happen anyhow, regardless whether some obscure saint decided to warn us ahead of time.  And besides, since the saints are supposed to be pretty powerful and able to work miracles and all, don't you think that there'd be a more direct way of warning us than having his blood liquefy?  How about the saint putting big letters in the sky spelling out "WATCH OUT THERE'S GOING TO BE AN EARTHQUAKE?"  Or having celestial trumpets blare, and the saint's deep, booming voice shout out, "There's going to be a volcanic eruption in the middle of downtown Omaha, you probably should evacuate?"  Or simply having the saint tell Donald Trump to tweet about it?

In any case, I'm willing to wait and see what 2017 has in store.  My guess is it'll be a mixed bag as always, although considering the fact that the incoming Cabinet appointments have all been selected from the Daddy Warbucks Fan Club, it could be a rough ride.  So we'll have to wait until the next scheduled liquefaction, which is in May, if the Earth isn't hit with a giant asteroid or something before then.
Posted by Gordon Bonnet at 2:02 AM