One statement that completely makes me crazy -- right up there with "evolution is only a theory" -- is "scientists have been wrong before, so everything science says could be proven wrong tomorrow."

The latest person to make this infuriating pronouncement as a way of ignoring what the science actually does say is Anthony Scaramucci, aide to President-elect Trump and member of his Transition Team Executive Committee.  Here's what Scaramucci said:


I know that the current president believes that human beings are affecting the climate.  There are scientists that believe that that's not happening...  I'm not suggesting that we're not affecting the change.  I honestly don't know.

There was overwhelming science that the earth was flat and there was an overwhelming science that we were the center of the world.  We get a lot of things wrong in the scientific community.  You've got a very common-sense oriented president at the top of the chain now.  Some of the stuff you're reading and some of the stuff I'm reading is very ideologically-based about the climate.  We don't want it to be that way...

What I want to do is I want to have a problem solving-oriented, common sense, solution-based administration, because that’s what the president-elect has given us a directive to do here at Trump Tower...  [Y]ou’re saying the scientific community knows, and I’m saying people have gotten things wrong throughout the 5,500-year history of our planet.

Scaramucci hastens to add, in case there was any doubt in that regard, "I am not a scientist."

*brief pause to punch a wall*

There are so many wrong things packed into this short statement that I barely know where to begin.  First, as I've said 253,892 times before, the argument over whether climate change is (1) happening and (2) anthopogenic in origin is over, at least among the scientific community.  That's not "ideologically-based," that's as close to a certainty as you want to get.  The only arguments any more among climate scientists are how bad, how much, and how fast.

Then there's the "scientists get things wrong" trope.  First, of course scientists get things wrong.  They're human, so they make mistakes, fall for their own biases, and on rare occasion become so wedded to their theories that they falsify results.  But the point here is that this is why science exists.  It gives us a rigorous way to catch this kind of stuff, to self-correct, to make sure that errors aren't perpetuated.  Some errors do persist -- to pick one that actually did (i.e. not Scaramucci's "the Earth is flat" bullshit, which was disproven in the time of the ancient Greeks and not widely accepted by the learned after that time), there's the geocentric model and its cousin, the idea that heavenly objects move in perfect circles.  That one did take a while to knock to pieces, but it's significant that the resistance didn't come from the scientists, it came from the religious authorities.  But the work of Copernicus, Galileo, and especially Tycho Brahe and Johannes Kepler left no room for argument.  Confronted with the data, the model has to change.  And far from being a weakness in the scientific approach, its ability to self-correct is its greatest strength. 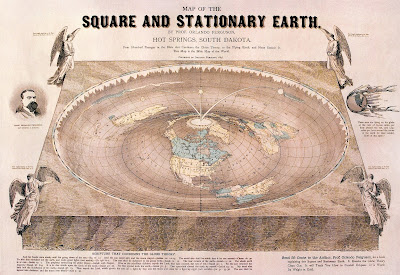 Then there's the subtlest mistake in Scaramucci's statement, which is that Trump's adherence to "common sense" is some kind of virtue, that common sense should win over science.  The problem is that common sense is sometimes wrong -- our intuition doesn't always steer us in the right direction.  Here's a simple example from physics:


Someone shoots a gun held perfectly level/parallel to the ground.  At the same moment that the gun is fired, a bullet is dropped from the same height.  Which bullet hits the ground first?

Intuition -- i.e. common sense -- usually leads people to figure that since the dropped bullet travels a much shorter distance, it must hit the ground first.  It's hard to picture the real situation, which is that the fired bullet actually travels in an arc, and drops vertically at exactly the same rate as the dropped bullet does.  In fact, the two bullets hit the ground at precisely the same time, something that has been demonstrated in every high school physics class in the world (although hopefully using something other than an actual gun).

This is why we need a rigorous system for determining whether a claim is true.  Our common sense is what's flawed, leads us astray.  Science catches its own errors, and has a stepwise process for winnowing out poor data and bad thinking.  It doesn't work 100% of the time -- nothing does -- but it's by far the best thing we've got.

So I don't recommend that you listen to the clip, which you can access at the link I posted above, both for your knuckles' sake and your wall's.  But if you do, you will be listening to one of the best examples of political doublespeak I've ever heard.

So for fuck's sake, let's listen to the scientists instead of the talking heads like Anthony Scaramucci blathering on about common sense and ideological climate science and the flat Earth.  It's time to trust the people who actually know what they're talking about.
Posted by Gordon Bonnet at 2:08 AM