An obituary for facts

Of all of the things to be appalled about over the last few days -- and there is a wide selection to choose from, something for everyone -- nothing chilled me like the announcement by White House Press Secretary Sean Spicer that the crowds attending Donald Trump's inauguration set a record.

"This was the largest audience to ever witness an inauguration, period," Spicer said.  "That's what you guys should be writing and covering."

Which, of course, is blatantly and demonstrably false.

Then, when Trump spokesperson Kellyanne Conway was asked about Spicer's claim on NBC's Meet the Press, she said that it wasn't a lie -- that Spicer had simply given the public "alternative facts."

On the face of it, this may seem like a small matter -- the people who are in charge of presenting Donald Trump's public face to the media stretching the truth to assuage the new president's ego.  But think about it.  What Spicer and Conway are saying is, "Facts don't matter.  Accurate reporting doesn't matter.  All that matters is believing what you're told."

And even more terrifying is that Trump's followers, by and large, did believe what Spicer and Conway said.  "I don't believe one damned thing that comes from the crooked, bought-and-sold mainstream media," one person posted on Facebook.

"The liberal press will do anything to disparage our president," said another.  "No lie is too big or too small as long as it casts him in a hateful light."

This last one is the same person who posted the following photograph: 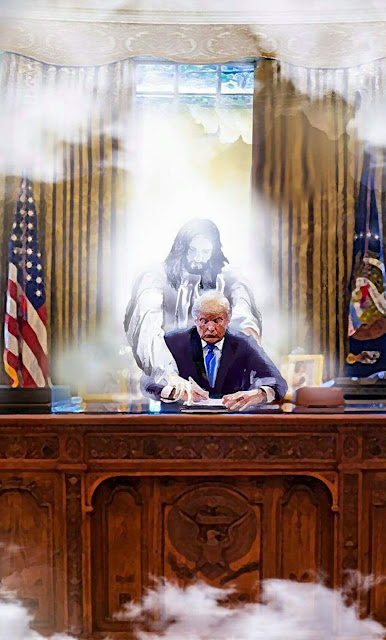 And I've already seen the following three times, with a caption of "Finally allowed back in the White House:" 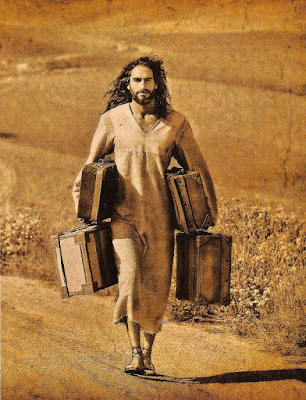 We're being consistently steered away from respecting facts and evidence toward ideology, belief, confirmation bias, and a cult of personality -- an approach far more consistent with North Korea than with the United States, where Dear Leader is the center of near-worship on the basis of everything from his flawless statesmanship to his golf game.

But that's the direction we're heading.  Unsurprising, then, that governmental positions are being filled with people who have the same attitude-- predominantly climate change deniers (Tom Price, Rex Tillerson, and Scott Pruitt) and young-Earth creationists (Betsy DeVos, Ben Carson, Jeff Sessions, and Vice-President Mike Pence himself).  None of these views are based on logic, rationality, or fact; they're either blind, doctrinaire belief in the face of evidence, or confirmation bias to accept a claim because it's politically or economically expedient.

What blows my mind is how far this ignore-the-facts approach can take you.  If you believe that the crowds at Trump's inauguration were yuuuge, then that's what they were, photographs (or any other evidence) be damned.  If you think the Earth is 6,000 years old, none of the mountains of evidence showing this to be untrue will convince you -- but you will swallow that Beowulf was an "eyewitness account of dinosaurs showing that they coexisted with humans," as was just claimed this week by Answers in Genesis spokesperson and "scientist" Andrew Snelling.

And once you believe that facts and evidence don't matter, it's apparently a small step to believing that a thin-skinned, narcissistic egomaniac who is a serial adulterer and (by his own admission) guilty of sexual assault could be the anointed one of god.

As George Orwell put it in 1984, "The Party told you to reject the evidence of your eyes and ears.  It was their final, most essential command."

We've got a rough road ahead.  I'm cheered by the numbers of people who turned out for the Women's Marches Against Trump -- literally millions of people came out for what were almost entirely peaceful demonstrations against what this administration stands for.  But we've got our work cut out for us.  We have elected and appointed officials, and (apparently) a significant slice of the voting public, who have written the obituary for a fact-based understanding of the world, in favor of "alternative facts" that fit the way they wish things were.  And I'm at a loss for how to approach this.  Because once you've decided that anything other than evidence is the best guide to determining the truth, I have no idea how you could be convinced that you were wrong about any belief you might hold.

Heaven knows I'm not infallible myself, but I do have one thing going for me; if you think I'm wrong, show me the evidence.  I might not like it, but faced with the facts, I'll have no recourse but to say, "Huh.  I guess I was wrong, then."  But if the media lies 100% of the time (except when they say something you happen to have already believed), when your favorite political figure has no flaws and was elevated to the position by god himself, when the hard evidence itself is suspect -- you have erected an impenetrable wall around yourself, locking yourself in with nothing but your ideology for company.

And a nation full of people like that might be the most dangerous thing in the world.
Posted by Gordon Bonnet at 2:04 AM