I got a bit of a shock from something a loyal reader of Skeptophilia sent me yesterday.

I was emailed a link to an article claiming that a 1950s television show had predicted the future -- because it featured a character named Trump, a snake-oil salesman who convinced a town that he knew how to prevent an invasion of aliens (and the collapse of civilization).  All they had to do, he said, was to build a wall around the town.

My immediate reaction was that it was going to turn out to be like the similar claims made a couple of years ago that Adam Sandler had repeatedly predicted future events.  In other words, entirely bogus, complete bullshit, and made up from the get-go (the Adam Sandler claims came from a satirical website called Clickhole that was up front that they'd invented the whole story, but thousands of conspiracy theorists evidently missed that part).

But the weird thing about the Trump television show is...

The show was called Trackdown, which was an obscure western series starring Robert Culp as Texas Ranger Hoby Gilman.  And in the episode called "The End of the World," a huckster named Trump -- at least it was Walter Trump, not Donald -- comes into town claiming that there's going to be a worldwide invasion and subsequent destruction of civilization, and the only way to prevent the town from being destroyed was to pay him money so that he could oversee the building of a wall around the town.

"I bring you a message, a message few of you will be able to believe," Trump tells the townspeople.  "A message of great importance.  A message I alone was able to read in the fires of the universe.  And at midnight tonight, without my help and knowledge, every one of you will be dead."

When he's challenged on whether he's telling the truth, he says to the doubter, "Be careful, son, I can sue you." 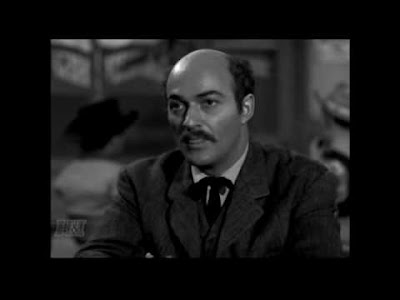 Walter Trump, who at least doesn't look like the President-elect [image courtesy of Snopes]

The doubter, of course, is shouted down, and the townspeople fall for Trump's lies.  Later in the episode, we hear the following:

Narrator: Hoby had checked the town.  The people were ready to believe.  Like sheep they ran to the slaughterhouse.  And waiting for them was the high priest of fraud.

Trump: I am the only one.  Trust me.  I can build a wall around your homes that nothing can penetrate.

Townperson: What do we do?  How can we save ourselves?

Trump: You ask how do you build that wall.  You ask, and I'm here to tell you.

Fortunately for the town, Hoby Gilman unmasks Trump's duplicity, and the con man is arrested and jailed.

Weird, no?  The whole thing has been vetted by Snopes, and apparently is 100% true -- in fact, on the Snopes link you can watch a clip from the show.

So a lot of woo-woo types are claiming that the show was prescient, as if television acted as some kind of electronic version of the Magic 8 Ball that was popular with kids when I was young.  (E.g., "Is Donald Trump's Mexican wall idea a complete and utter boondoggle?"  Magic 8 Ball:  "It is decidedly so.")

Be that as it may, the race is on by the wingnut contingent to scour other obscure 1950s television shows to see what else might be in store for us.

Honestly, however, all we're seeing here is the law of large numbers, plus a heaping measure of dart-thrower's bias.  If you have a large enough sample size and no parameters for narrowing down what you're looking for, eventually you'll notice weird coincidences; and of course we're going to pay more attention to cases where there was a weird coincidence than the tens of thousands of times there wasn't.  (I, for one, am glad that most television shows don't predict reality.  I would prefer not to live in a world where The Beverly Hillbillies, I Dream of Jeannie, or (heaven forfend) Lost in Space was an accurate predictor of future events.)

But I won't deny that it's peculiar.  And if it is going to play out the way it did in Trackdown, I wonder who our version of the Hoby Gilman character will be?
Posted by Gordon Bonnet at 2:01 AM