Dinosaurs, the Flood, and attempted murder

I have some friends who are currently trying to kill me.

At least, that's the only interpretation I can put on the fact that their Christmas gift to me was a copy of Dinosaurs for Kids by Ken Ham.  According to the back, amongst other things, we can learn from this book "the truth behind museum exhibits and flawed evolutionary timelines."

So my conclusion is that these friends were hoping that I would read this book and have an aneurysm, or possibly burst into flames.  Or both simultaneously.

But I'm pleased to say that their nefarious little plot did not succeed, which is why I'm here today to tell you about it, and to quote for you a paragraph from the final page of the book, to wit:


Follow the Truth!  While the Bible helps us to understand how and when dinosaurs lived, and even why they died, the Bible doesn't give us highly descriptive details about each and every one.  It gives us the big picture of history so we can develop a general understanding of these creatures.  Then we can use observational science to help us fill in some of the details and increase our understanding -- all the while knowing that nothing in real science can or will contradict God's Holy Word.

In other words, we can accept everything that science says about anything unless it tells us something different than what we want to hear.

But I decided to write about this today in Skeptophilia not only to celebrate my escaping a near brush with death, but because Ken Ham and dinosaurs are in the news for a different reason. Apparently Ham is pissed off at The Washington Post because they claimed that he thinks that dinosaurs were wiped out by the Great Flood.  So he dealt with this the way any reasonable, intelligent adult would; he posted a snarky comment about it on Twitter.

"Hey @washingtonpost," Ken tweeted, "we at @ArkEncounter have NEVER said Dinosaurs were wiped out during Flood-get your facts right!"

In fact he went on to elaborate that the dinosaurs didn't die in the Great Flood; they actually made it onto the Ark along with two (or seven, depending on which biblical account you believe) of each of the six billion-odd species on Earth, where they lived in cages until the waters magically went somewhere and Noah let them all go on the side of Mount Ararat, and became extinct afterwards because of other stuff, possibly because humans liked the taste of T. rex steaks too much.

Because that's ever so much more believable. 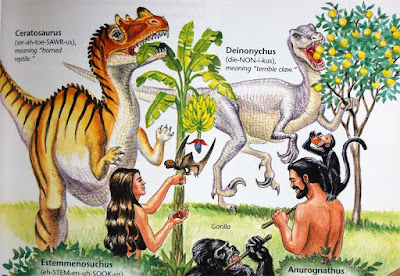 Note some other interesting features about the above illustration.  First, the Deinonychus appears to be levitating.  Maybe the Law of Gravity was also optional in the Garden of Eden.  Second, isn't it funny how Adam and Eve are always shown as naked, but there with strategically placed bushes to hide their naughty bits?

Like in the following photograph of foreplay with a voyeur dinosaur: 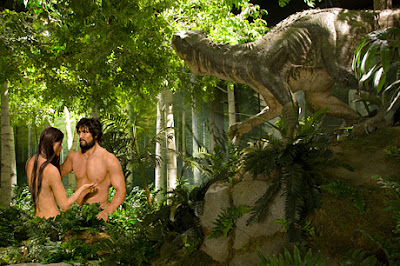 And the following, in which the lamb is clearly thinking, "Dude.  Find a different animal to block the view of your penis next time." 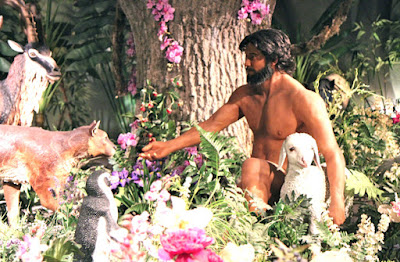 Implying all of the naked fun we could be having if the whole Apple Incident hadn't intervened.  But, after all, this is the kind of lunacy we've come to expect from Ken Ham et al., who think that a miscopied and mistranslated bunch of archaic manuscripts written by some Bronze-Age sheep herders are the best tool we have for understanding biology and interpreting human behavior.

So that's our dip in the deep end for today.  Me, I'm going to go have a second cup of coffee, and plot revenge against the friends who gave me the dinosaur book.  I think I'm going to have to work pretty hard to come up with anything near as clever, and that's assuming that reading Ham's book doesn't have some kind of delayed reaction side effects.  If you see a headline in tomorrow's news that says, "Upstate NY Man Bursts Into Flame, Dies," you'll know what happened.
Posted by Gordon Bonnet at 2:30 AM