Disbelieving your own eyes

In May of 2015, the brilliant and acerbic Andy Borowitz wrote a piece for The New Yorker entitled "Earth Endangered by New Strain of Fact-Resistant Humans."  Borowitz wrote:

I wonder if Borowitz realizes how literally accurate his satirical piece is.   Because Brian Schaffner, professor of political science at the University of Massachusetts, has just published research showing something that even given humanity's fact-resistance, is kind of mind-blowing.

In the first, and less surprising part of the research, Schaffner showed the now-famous aerial photographs from Obama's and Trump's inaugurations to 1,388 people, and asked them which was which.  Unsurprisingly, given the claims by Sean Spicer, Kellyanne Conway, and others, a significant percentage of Trump voters thought the Obama photograph (clearly showing more people) was Trump's, and vice versa. 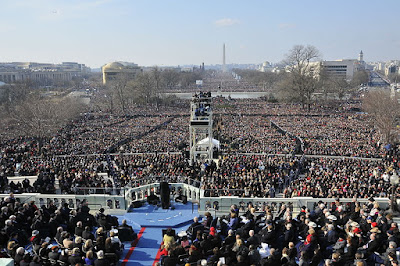 Of course, all that shows is that people believed what Spicer said, and/or that the photograph itself had been misrepresented in the press.  So far, nothing too shocking.  But the amazing -- and alarming -- piece of Schaffner's research is best described in his own words:

Would some people be willing to make a clearly false statement when looking directly at photographic evidence — simply to support the Trump administration’s claims?

In fact, about 15% of the Trump voters responded, with no apparent hesitation, that the photograph containing fewer people actually had more.  (I'm not sure if I find it heartening that 85% of Trump voters correctly identified the photo with the bigger audience, however, given that 41% still thought it was from Trump's inauguration.)

As Alan Levinovitz of Slate wrote:


The process of embracing a charlatan’s empowering vision is not rational, which means that rational arguments are unlikely, in isolation, to dispel it.  Studies have repeatedly demonstrated that people cling tenaciously to their worldviews, and conflicting data may actually strengthen their beliefs.  (Just look at this family who thinks Trump is “a man of faith who will bring Godliness back.”)  To renounce Trump would mean admitting that one’s worldview—of a country wracked by carnage, as the president put it in his inaugural address, and a truth-telling hero who can heal it—is fundamentally mistaken.  And that can also mean confronting existential panic without a panacea.  It is much easier to forgive Trump for not locking her up than to wrestle with such truths...  It’s also much easier to convince yourself that a crowd is larger than it appears, particularly when the man you’ve put your faith in is arguing the same thing.  And in the case of the photographs, it didn’t take much to come up with an explanation for the apparent discrepancy.  Trump himself supplied it: Mainstream media manipulated both images to make it appear as if Obama’s had more.

Okay, I know I have biases just like everyone, and (like everyone) am probably wrong about some of my beliefs.  But what I completely do not get -- to the point of complete and utter bafflement -- is how people could be so wedded to their own biases that they would take incontrovertible hard evidence that they were wrong, and instead of changing their beliefs, disbelieve the evidence.

Bill Nye compares this sort of thing to a belief in astrology, which persists despite huge amounts of evidence against it.  "For example, if somebody believes in astrology, it takes them about two years to get over it," Nye said.  "You have to show them over and over there’s no such thing as astrology, it doesn’t really work, and then they let go.  But everybody’s expectation that you’ll let go in a week is not going to met...  So we have to work, I think, diligently in the science community to fight back.  Of course there are the facts, we start with those.  But there’s this human nature thing on both sides to fight back.  We have our bubble over here, they have their bubble over there."

All of which means that rationalists have their work cut out for them.  I've seen over and over the extent to which humans react to new information primarily from an emotional, not a logical, standpoint; but over and over I'm astonished at how deep this tendency runs.  Andy Borowitz's quips about "fact-resistant humans" made me laugh, but I'm afraid in the last week or so my laugh has rung rather hollow.  Because the people currently in charge of the United States seem hell-bent on using this avoidance of the facts to their benefit, in terms of consolidating power and silencing the opposition.

And if it works, I'm afraid we're in for a really, really rough few years.
Posted by Gordon Bonnet at 2:12 AM