One of the most common things that has been said to me by Trump supporters is "give him a chance to govern."  And although I've been pretty vocal in my criticism of the President-elect, his rhetoric, and his decisions, no one would be happier than me if the prognostications of doom I'm hearing don't come true.  After all, the health of our democracy, our standing in the world, and the long-term survivability of the planet is far more important than any schadenfreude I would get from seeing someone I don't like fail.

But as far as giving people a chance, there are times when what a person says or does makes me disinclined to put them in the position of being able to do worse -- or simply to follow through on what they've already said.  I'm under no obligation to "give a chance" to someone who has shown no sign of competence.

Which brings me to Betsy DeVos.

I was appalled enough when she was first nominated for the position of Secretary of Education.  DeVos is a multi-millionaire whose staunch support of vouchers and charter schools in her home state of Michigan has been, by and large, an abysmal failure.  In an article written last month for the Detroit Free Press, Stephen Henderson has outlined the results -- a weakened public school system, and a host of charter schools whose lack of oversight has generated year after year of failure.  (One of them, Hope Academy of Grand River and Livernois, scored in the first percentile for academic performance in 2013 -- and despite of that, two years later had its charter renewed.) 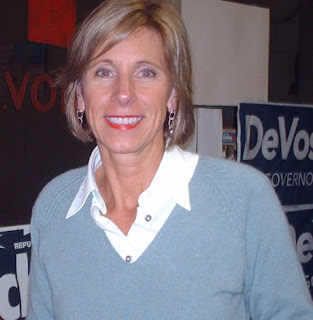 I still held out a modicum of hope that her confirmation hearing would show that she wasn't as bad as she seemed.  That hope, unfortunately, was destined to be dashed.  Her testimony at the hearing was a rambling, disjointed birdwalk that at times left me thinking, "What did she just say?"  She showed herself to be unprepared -- no, worse, she showed herself to be entirely incompetent.  As an example, she revealed during questioning that she didn't know the difference between academic proficiency and academic growth, terms that any first-year teacher would know.

As should the Secretary of Education.

It'd be nice to think this was just a stumble.  We all do that sometimes -- choke on something we should have known, or do know, and afterwards think, "Wow, I sure screwed that up."  But the entire hearing was full of "stumbles" like this.  When Virginia Senator Tim Kaine asked her if she supported compliance with the Individuals With Disabilities Education Act as a requirement for receiving federal funding, she replied, "I think that's a matter best left to the states."

So wait a moment.  It's up to the states to determine if they'll follow a federal law?  One that mandates equal access to facilities and services for all students, regardless of disabilities?

That response, however, became a refrain.  On a question regarding guns in schools asked by Senator Chris Murphy of Connecticut, she once again said, "I think that's best left for states and locales to decide."  Allow me to point out that Murphy represents the district in Connecticut where the Sandy Hook massacre took place.  When he understandably responded with incredulity, DeVos went into a bizarre description of how she knows of a school in Wyoming where they keep a gun to protect students from "potential grizzlies."

The response was so weird that #PotentialGrizzlies trended on Twitter for hours afterward.

Most of her testimony was a rather clumsy dance to avoid answering questions directly.  When given a long list of statistics regarding the failure of schools in Detroit, she responded that she thought Detroit schools were actually doing quite well.  Asked about her stance on science education, apropos of the teaching of evolution and climate change, she said, "I support the teaching of great science."

Well, forgive me for being a little dubious on that point, given DeVos's history of supporting groups like Focus on the Family and the Foundation for Traditional Values, both of which have worked tirelessly to eliminate the teaching of evolution in public schools.  Not to mention her own words, "Our desire is to confront the culture in ways that will continue to advance God's kingdom."

The supporters of the President-elect are saying, "Give her a chance."  Well, you know what?  I am under no obligation to "give a chance" to a person who has shown herself to be wildly unqualified for the job she's been nominated for.

Imagine if this was the approach taken in business.  A CEO interviews a candidate for a job, and the prospective employee refuses to give direct answers to questions, and in general shows himself to be a terrible choice for the job.  If the CEO didn't hire him, would you tell him, "You should have given him a chance?"

Worse still is the realization that the "chance" we're being asked to take here is to risk the education of millions of children.  We have no option at this point but to give Donald Trump a chance; after today, he'll be the president whether we like it or not.  We are not, however, required to give a chance to his incompetent nominees.

That's why we have confirmation hearings.
Posted by Gordon Bonnet at 2:12 AM