*Note to the more sensitive members of the studio audience: as the subject of this post is profanity, there's gonna be some profane language herein.  Be thou forewarned.*

My dad had a rather ripe vocabulary, probably largely due to the 29 years he spent in the Marine Corps.  My mother, on the other hand, was strait-laced to the point that even saying the word "sex" in her presence resulted in a raised eyebrow and the Fear-Inducing Stare of Disapproval.  My dad solved this problem by inventing new swear words (such as "crudbug") or repurposing actual words for swearing (such as "fop").  When my mom would get on my dad's case about it, he would respond, completely deadpan,"Those aren't vulgar words, Marguerite," which was true in detail if not in spirit.

It's probably obvious by this juncture that I take after my dad a lot more than my mom.  I tend to have a pretty bad mouth, a habit I have to be careful about because my job involves guiding Tender Young Minds (although I think I could make a pretty good case that most of those Tender Young Minds have a worse vocabulary than I do).  But by this point in my life, my mom's litany of "the only people who need to use vulgar language are the ones who don't have any better words in their vocabulary to say" is ringing pretty hollow.  I may have a lot of faults, but I'm damn sure that a poor vocabulary is not amongst them. 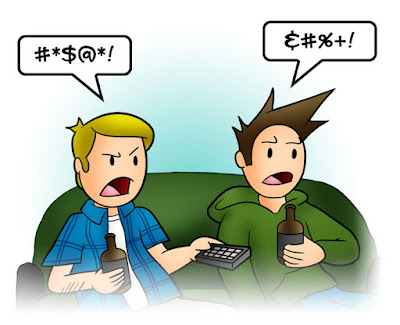 I tend to use swear words on two occasions -- for the humor value, and when I'm mad.  And to me, those are two very valid instances in which to let fly.  I still recall the great jubilation I felt when as a graduate student I first ran across John J. McCarthy's seminal paper on the linguistics of swearing, "Prosodic Structure and Expletive Infixation," in which we find out the rules governing inserting the word "fucking" into another word, and thus why it's okay to say "abso-fucking-lutely" but no one says "ab-fucking-solutely."

Even more cheering was the paper I just read yesterday by Gilad Feldman, Huiwen Lian, Michal Kosinski, and David Stillwell called "Frankly, We Do Give a Damn: The Relationship Between Profanity and Honesty" in which we find out that habitual swearers tend to be more honest, and which also should be the winner of the 2017 Clever Academic Paper Title Award.  The authors write:

Besides the general finding that profanity is positively correlated with honesty, I thought the variation in profanity use state-by-state was absolutely fascinating.  Connecticut had the highest levels of swearing, followed by Delaware, New Jersey, Nevada, and New York (not too goddamn shabby, fellow New Yorkers, and I'm proud to have done my part in our state's fifth-place finish).  Utah came in dead last, followed by Arkansas, Idaho, South Carolina, and Tennessee.  One has to wonder if religiosity has something to do with this, given the bible-belt status of most of the states at the bottom of the pile, but establishing any sort of causation was beyond the scope of this study.

Okay, so I'm coming across as self-congratulatory here, but I still think this research is awesome.  Given the amount of grief I got from my mom about my inappropriate vocabulary when I was a teenager, I think I'm to be allowed a moment of unalloyed pleasure at finding out that I and other habitual swearers are more likely to be honest.  So while I'll still have to watch my mouth at school, it's nice to know that my turning the air blue at home when I wallop my shin on the coffee table is just my way of honestly expressing that bone bruises hurt like a motherfucker.
Posted by Gordon Bonnet at 2:15 AM