Locking yourself into error

I got in a rather interesting -- well, I suppose you could call it a "discussion" -- with a Trump supporter yesterday.

It came about because of recent posts here at Skeptophilia that have been pretty critical of the president, his appointees, and their decisions.  After a few minutes of the usual greetings and pleasantries ("You're a liberal lackey who sucks up what the lying mainstream media says without question!", stuff like that), I asked her what to me is the only pertinent question in such situations:

"What would it take to convince you that you are wrong?"

"That's not what I asked," I responded.  "I asked what would it take to convince you that you are wrong.  About Donald Trump.  Or about anything."

"What would it take to convince you?" she shot back.

"Facts and evidence that my opinion was in error.  Or at least a good logical argument."

"People like you would never believe it anyway.  You're swallowing the lies from the media.  Thank God Donald Trump was elected despite people like you and your friends in the MSM."

"And you still haven't answered my question."

At that point, she terminated the conversation and blocked me.

Couple that with a second comment from a different person -- one I elected not to respond to, because eventually I do learn not to take the bait -- saying that of course I have a liberal bias "since I get my information from CNN," and you can see that the fan mail just keeps rolling in.

Of course, the question I asked the first individual isn't original to me; it was the single most pivotal moment in the never-to-be-forgotten debate between Ken Ham and Bill Nye over the theory of evolution in February of 2014, in which the moderator asked each man what, if anything, would change his mind.  Nye said:

Ham, on the other hand, gave a long, rambling response that can be summed up as "Nothing would change my mind.  No evidence, no logic, nothing."

The whole thing dovetails perfectly with a paper released just two days ago in the journal Political Psychology.  Entitled "Science Curiosity and Political Psychology," by Dan M. Kahan, Asheley Landrum, Katie Carpenter, Laura Helft, and Kathleen Hall Jamieson, the paper looks at the connection between scientific curiosity and a willingness to consider information that runs counter to one's own political biases and preconceived notions.  The authors write:


[S]ubjects high in science curiosity display a marked preference for surprising information—that is, information contrary to their expectations about the current state of the best available evidence—even when that evidence disappoints rather than gratifies their political predispositions.  This is in marked contrast, too, to the usual style of information-search associated with [politically-motivated reasoning], in which partisans avoid predisposition-threatening in favor of predisposition-affirming evidence.

Together these two forms of evidence paint a picture—a flattering one indeed—of individuals of high science curiosity. In this view, individuals who have an appetite to be surprised by scientific information—who find it pleasurable to discover that the world does not work as they expected—do not turn this feature of their personality off when they engage political information but rather indulge it in that setting as well, exposing themselves more readily to information that defies their expectations about facts on contested issues.  The result is that these citizens, unlike their less curious counterparts, react more open-mindedly and respond more uniformly across the political spectrum to the best available evidence.

And maybe that's what's at the heart of all this.  I've always thought that the opposite of curiosity is fear -- those of us who are scientifically curious (and I will engage in a bit of self-congratulation and include myself in this group) tend to be less afraid about being found to be wrong, and more concerned with making sure we have all our facts straight. 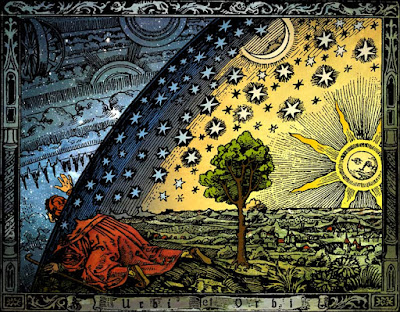 So I'll reiterate my question, aimed not only toward Trump supporters, but to everyone: what would it take to convince you that you are wrong?  About your political beliefs, religious beliefs, moral stances, anything?  It's a question we should keep in the forefront of our minds all the time.

Because once you answer that question with a defiant "nothing could convince me," you have effectively locked yourself into whatever errors you may have made, and insulated yourself from facts, logic, evidence -- and the truth.
Posted by Gordon Bonnet at 2:31 AM