Lurking under the ice

So once again I've been sent a link several times with either "Oh, lord, here we go again" or "Ha!  This is real!  You skeptics are so dumb!" notes appended.  The link is to a story in The New York Post about a "massive anomaly lurking in Antarctica."

My first thought was to wonder how an anomaly can lurk, whether in Antarctica or elsewhere, and of course this put me in mind of H. P. Lovecraft's seminal horror story "At the Mountains of Madness."  In this tale some explorers head out to the Frozen Continent after the discovery of certain artifacts of great age, and upon investigation they find a massive city (I believe it's described as "cyclopean" and "eldritch," two of Lovecraft's absolute favorite words), following which they're one by one picked off and eaten by Shoggoths, who apparently lurk quite effectively.

So the usual stuff.  But the particular anomaly referenced in the Post article was discovered not through direct exploration but by use of a magnetometer, and the conclusion was that there is a large metallic object hidden (or lurking, as the case may be) underneath the ice in Wilkes Land, a region of eastern Antarctica.  It's buried at a depth of 900 meters, and is 250 kilometers across.

Which is pretty big.  Cyclopean, even. 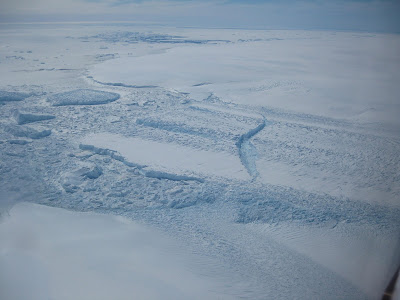 Wilkes Land, also known as "Not My Idea of a Vacation Spot" [image courtesy of NASA/JPL and the Wikimedia Commons]

Some scientists have suggested that the anomaly is the remains of a huge asteroid -- perhaps twice as large as the one that created the Chicxulub Crater in what is now the Gulf of Mexico 65 million years ago, and in the process did in most of the species of dinosaurs.  If so, the Wilkes Land Magnetic Anomaly is a good candidate for the smoking gun of the Permian-Triassic Extinction, which occurred 252 million years ago and is estimated to have wiped out 96% of marine life and 70% of terrestrial life in one fell swoop.  The timing certainly seems right, as do the characteristics of the site.

But of course, far be it from your average New York Post reader to accept something like the results of scientific study.  No, the lurking anomaly has to be something more mysterious.  Some of the suggestions have been:

Then there's the "UFO-hunting crew" that calls itself "Secure Team 10," which basically combined all of the above into one all-purpose loony explanation.  The Post explains their claim as follows:

Secure Team 10 suggested the Nazis built secret bases in Antarctica during World War II, which were designed to be used by flying saucers.

The UFO hunters added: “There is some evidence of this coming to light in recent years, with images purporting to show various entrances built into the side of mountains, with a saucer shape and at a very high altitude.”

“This begs the question: how would you enter these entrances without something that could fly and was the same shape as the hole itself?”

My general opinion is that it begs a great many more questions than that one, but do go on.


Secure Team also suggested the US Navy led a mission to investigate the mysterious continent.

This expedition was called Operation High Jump, which conspiracy theorists believe was an attempt to find the entrance to a secret world hidden underneath Earth.

Have I emphasized strongly enough that this magnetic anomaly, whatever it is, is covered by a 900-meter-thick sheet of ice?

Anyhow.  Once again we have the woo-woos coming up with bizarre ideas, which of course is what woo-woos do, and tabloid clickbait like The New York Post enthusiastically jumping on the bandwagon to induce readers to provide them with ad revenue by clicking on the link.

And, as a side effect, inducing my readers to send it to me, which they've done (at the time of this writing) six times and counting.  So thanks to all of my loyal readers for keeping me informed on the latest missives from the wingnuts.  As for me, I think I'm going to lurk my way up to the kitchen and get another cup of coffee.
Posted by Gordon Bonnet at 2:01 AM