You've probably heard of the Bilderberg Group, which is an annual conference of a couple of hundred  "political elite, experts from industry, finance, academia, and the media" named after the first place they met (back in 1954), the Hotel de Bilderberg in Oosterbeek, Netherlands.

They're also thought by some to be synonymous with, or at least a subcategory of, the Illuminati, and as such, the Bilderbergs are the evil, ultra-intelligent ruling elite of the New World Order who are controlling everything that goes on in all of the world's major governments, and who are so super-top-secret that they have a Wikipedia page saying where and when their next meeting is going to be held.

Which is why I choked on my coffee yesterday morning when I read that the Bilderberg Group's site had been hacked, and a cryptic message left behind that has the conspiracy theorists experiencing multiple orgasms.  The message is the usual "we know who you are, you won't get away with this" kind of stuff, except for the fact that it has odd capitalization scattered throughout the message, leading the aforementioned so-and-sos hopping about making excited little squeaking noises about how it contains a secret encoded message. 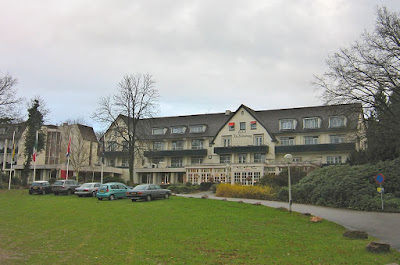 You can read the entire thing at the link posted in the preceding paragraph, but here's an excerpt so you can get the flavor:

Dear Bilderberg mEmBers, From NoW(), each OnE of you have 1 year (365 days) to truly work in faVor of HumaNs and not youR private interests
Each TopIc you disCuss or work you achieve thRough YoUr uber privAte meetinGs should from now benefit WORlD population and not X or Y groUp of people
OtHerWIse, we will FinD you and we Will hAck you
MiNd the cuRrent situation: We conTrol your expensive connected cars, we control your connecteD house security devices, we control your daughter laptop, we control your wife’s mobile,
we tape YoUR seCret meetings, we reAD your emaiLs, we control your faVoriTe eScort girl smartWatch, we ARe inside your beLoved banks and we Are reading YoUr assets
You wont be safe anywhere near electricty anyMore
We WiLL watch yOu, from NoW on you got to WoRk for Us, Humanity, the People

So that's pretty threatening, especially the part about controlling their favorite girl escorts.  You have to wonder how they'll do that.  Are the girl escorts remote-controlled robots?  Or do they have neural implants, so that when the Bilderberg members are in (as it were) mid-escort, the girls will suddenly start cackling in a maniacal fashion and demand passwords to their beLoved banks or they won't finish escorting them, leaving them in escortus interruptus?

But it's the potential for an encoded message that really has the conspiracy world humming.  One possible decoding of the message is included at the above website, which apparently involves conversion of the capitalized letters to hexadecimal and dividing by 3,600,000 and looking at it with your eyes squinched up, and gives you a latitude and longitude that's pretty close to the North Pole.

Which is incredibly significant, because before this, the location of the North Pole has been a highly-classified secret.  Just think of what would happen if WikiLeaks got a hold of this information, and put together the location of the North Pole with Pizzagate.  There would be massive uprisings.  Major world governments would fall.  Donald Trump would write several self-congratulatory tweets about it.

It would be, in a word, chaos.

So anyhow.  The whole thing is impressive mainly because of the fact that the Bilderberg website is probably pretty heavily protected, and the fact that hackers got into it is a little scary.  I mean, just think about it.  If they could do that, they could probably hack the sites of the Republican and Democratic National Conventions.  And think of what effect that could have.

But as far as the message, I'm not convinced it contains anything of interest.  It will, however, give the conspiracy theorists something to worry at, which with luck will keep them out of trouble for a while.  And who knows?  Maybe it will induce the Bilderbergs to turn their attention to humanity's needs rather than personal gain.  Not a Bad oUtcome, You GOtta admit, RegarDless Of your opiNionS aBOut the ethics Of hacKS.
Posted by Gordon Bonnet at 2:12 AM