Protecting the arts from ideology

It's the end of first semester at my school, which means my Critical Thinking classes are finishing up and ready to move on, and I'm preparing to start with a whole new group in a week and a half.  The first semester students are currently working on their final papers, which is a critical analysis of how their thinking has changed since the beginning of the class.

I received one paper early -- they're not officially due until next Thursday -- and one paragraph from it stood out.  The student wrote:


One thing that has become apparent to me through this course is that you can't separate critical thinking from creativity.  Critical thinking really means applying creativity and a broader perspective to everything -- seeing that there are many paths to understanding, and for most things in life, there is no single right answer.  This is why I believe that cutting arts education, which is happening in many schools, will have negative impacts on every subject.  By eliminating the arts, we are taking away one of the fundamentally unique things about being human -- the ability to create something entirely new.  How can we find creative solutions to problems if we've been taught that the most creative endeavors have no value?

Well, first, her perceptivity absolutely took my breath away.  Her observations are not only spot-on, they are even more pertinent than she may have realized, because just yesterday an announcement was made that the Trump administration is considering balancing the federal budget by (amongst other things) eliminating the National Endowment for the Arts.

It brings to mind a similar move that was proposed in England during World War II -- to eliminate funding for the arts in favor of diverting the money to the military.  Winston Churchill famously responded, "Then what are we fighting for?"

Which is it exactly.  Our lives are made immeasurably richer because of the arts -- not only art per se, but writing, music, theater, film, and dance.  The NEA has supported arts and artists of all genres, not to mention programs to encourage the next generation of creative young people.  So you might be asking yourself, why would the new administration target such an organization?

Make no mistake about it; this is an ideologically-based salvo.  It's not about saving money.  The NEA's contribution to the federal budget last year was $148 million out of a $3.9 trillion total, a portion that Philip Bump explains thusly:


If you were at Thanksgiving and demanded a slice of pecan pie proportionate to 2016 NEA spending relative to the federal budget, you'd end up with a piece of pie that would need to be sliced off with a finely-tuned laser.  Put another way, if you make $50,000 a year, spending the equivalent of what the government spends on these three programs would be like spending less than $10.

The conservative powers-that-be have targeted the arts for one reason and one reason only; artists are not controllable.  If you give people the power to create, they will do so -- but won't necessarily create something that makes your political party, religion, or gender comfortable.  One of the most widely-publicized examples of this is the NEA-supported work of American photographer Andres Serrano, who made headlines (and received death threats) for his piece Piss Christ, which was a photograph of a crucifix submerged in a jar of urine.

Sometimes the role of art is to shock, to jolt us out of our complacency.  I know as a writer, I am conscious of the fact that I'm writing to entertain -- but at the same time, if my readers' brains are the same when they're done with my book as they were when they started, I've failed.  All of the arts are about expanding our awareness -- twisting our minds around so we see things in a different way.

That twisting process isn't necessarily comfortable.  And for those of us who value conformity -- those who would like to see everyone follow the rules and march in tempo and draw inside the lines -- it can be profoundly frightening.  But that's exactly why we need the arts.  The capacity for turning your brain around and altering your perspective is not learned by rote.

And we'll need that sort of creativity, considering some of the issues we're currently facing.  As Albert Einstein put it, "We can't solve problems by using the same kind of thinking we used when we created them." 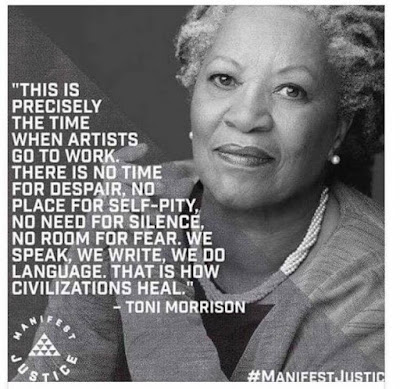 So this ideological shot-across-the-bow needs to be fought, and fought hard, even if you haven't always agreed with every project the NEA has supported.  We need our artists, and more importantly, we need our government and business leaders, our doctors, scientists, educators, and engineers to have the skills that the arts teach.  As my student put it -- if we devalue the arts, we devalue the creative approach to all aspects of life.

And to the artists, writers, musicians, actors, dancers, and all other creative people out there: keep creating.  Keep exploring, keep pushing the boundaries, keep making us see the universe in a different way.  Don't let your unique voice be silenced.  Even though things seem dark right now, recall what one of my favorite visionaries -- J. R. R. Tolkien -- put in the mouth of his iconic character Frodo Baggins, as he faced the overwhelming might of Mordor:  "They cannot win forever."

Posted by Gordon Bonnet at 2:40 AM