There's a natural human tendency to want the people who hurt us to suffer.  It's not nice, it's not productive, but it's pretty universal.

And now some psychologists have demonstrated that there is a neurological underpinning to our love of schadenfreude.

David S. Chester and C. Nathan DeWall of the University of Kentucky Department of Psychology set up a group of 156 test subjects to have the opportunity to gain (harmless) revenge for perceived hurts.  Each of the subjects was instructed to write an essay on a personal subject, and the essays were traded among the group for feedback. Unbeknownst to the participants, however, some of the feedback wasn't from other test subjects -- instead, the researchers had substituted their own, and harsh, feedback.  ("One of the WORST essays I've ever read," for example.)

The participants took a survey to rate their mood before and after the feedback.  After receiving an awful response, test subjects said (understandably) that their mood suffered.  But then the researchers allowed the recipients of bad feedback to use a computer simulation to stick pins in a voodoo doll symbolizing the person who had trashed their essay, and found that when they did that, their mood recovered -- almost to pre-feedback levels. 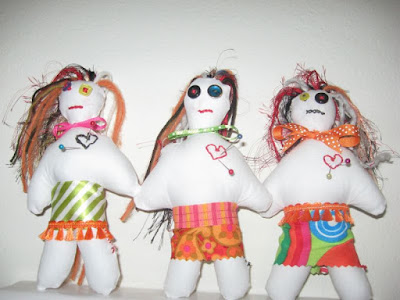 A second experiment refined the response even further.  A group of 154 people were given a pill -- a placebo, of course -- but told that the pill would have two effects: enhancing their cognitive abilities, and stabilizing their mood.  They were then allowed to play a simple computer game, a three-person ball-passing game.

"Together, these findings suggest that the rejection–aggression link is driven, in part, by the desire to return to affective homeostasis," Chester and DeWall write.  "Additionally, these findings implicate aggression’s rewarding nature as an incentive for rejected individuals’ violent tendencies."

The researchers emphasized that they were not recommending revenge as a way of improving your mood, and suggested that other options (such as meditation or reconciliation) might actually work better.  But they found that the old adage "revenge is sweet" is uncannily accurate.

So there you are.  Another rather humbling feature of human psychology.  What I find most fascinating about all of this is not that we like to see those who have hurt us suffer -- that's not all that surprising, frankly -- but that when told we're being given something that will stabilize our mood, our desire for revenge evaporates.  Illustrating once again the rather terrifying fact of how easily manipulable we are.  We have undeserved confidence in our impulses, motives, and justifications -- when in fact, a more reasonable stance considering the research is to doubt pretty much everything we feel.
Posted by Gordon Bonnet at 1:58 AM