My mother's grandfather, Joseph Meyer, was one of a small community of French Jews near Donaldsonville, Louisiana.  His family, like many Jewish families, had their names changed in the 19th century -- Joseph's paternal grandparents were born Schillen Lévy and Mindel Bloch in Dauendorf, Bas-Rhin département, Alsace, France.  But the French authorities decided their names were too Jewish-sounding, and altered them by decree to Joseph and Minette Meyer.

Some of my Bloch and Lévy relatives chose to stay in Alsace, and a couple of generations further along one of my Bloch cousins, Céline Bollack, was born in the little town of Wintzenheim in 1893.  When the Nazis rose to power, Céline and her husband, Armand Simon, became involved in the French Resistance.  They passed out anti-Nazi literature, worked to organize people to fight the German infiltration into France, and even as circumstances looked darker and darker, would not be silenced.

In spring of 1944 they were in the town of Brive-le-Gaillarde, in the département of Corrèze in south-central France.  Brive-le-Gaillarde was a hub of the Resistance, and in fact had been the home of Resistance fighter Edmond Michelet (who was imprisoned at Dachau, contracted typhus, but survived both).

Armand and Céline were not so lucky.  They were arrested along with their fifteen-year-old daughter Irène in Brive-le-Gaillarde on April 4, 1944 for sedition and agitation (and not least because they were Jewish themselves).  They were transferred to a holding camp in Drancy, northeast of Paris, and on April 29 were part of Convoy 72 from Drancy to Auschwitz. 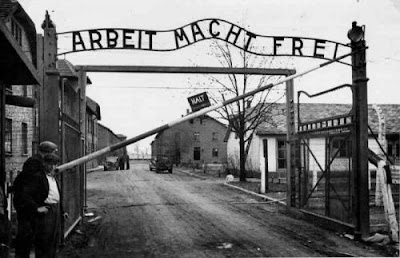 The Nazis were meticulous record-keepers.  There were 1,004 men, women, and children on Convoy 72.  Only 100 of them were chosen to work in the camp; the other 904 were gassed.

Armand, Céline, and Irène Simon were among the 904 executed shortly after their arrival at Auschwitz.

It bears mention, however, that even of the 100 who were allowed to live after arriving in the camp, only 38 survived to the liberation of the death camp on January 27, 1945.

What always strikes me about the Nazi atrocities is the complicity of ordinary folks.  It is easy enough to imagine horrific things being done by people who are truly evil; what is hard to wrap my brain around is how thousands of regular people, with families and friends and hobbies and jobs and pets, not only sat idly by while the Nazis arrested their neighbors, but actively helped.  These are the people who became informants, prison guards, collaborators.

These are the people without whom the Holocaust would never have happened.

I would like to say that such atrocities could never happen again.  But I see the same things going on today -- ordinary folks excusing elected officials for saying and doing terrible things; ridiculing, denigrating, or threatening people who speak up; agitating anger against those who look different or think differently.  If you believe that such behavior couldn't escalate into violence and oppression, if you think we've learned our lesson from the horrors of World War II, you're fooling yourself.  Those same tendencies are still with us, waiting to be whipped into a frenzy by leaders who gain power from inciting hate, making us afraid, and teaching us to distrust the truth.

The only way to stop this is to speak up and continue speaking up.  Such acts of courage are risky; my cousin Céline and her husband and daughter paid for their resistance with their lives.  But the risks -- whether they are minor ones such as ridicule and condemnation, or major ones such as imprisonment or execution -- do not abrogate our responsibility to stand up for what is right.

When I have attended Passover celebrations and the time comes for remembrance of the victims of the Holocaust, I have spoken the names of Céline, Armand, and Irène Simon along with the words "May they never be forgotten."  But I'll go a step further.  May we never lose our courage to do what they did, to speak truth to power.  We must not simply remember the ones who gave their lives for a noble cause, but be like them --  be unafraid to put ourselves in harm's way to stop those who would see our country and our world once again descend into a maelstrom of hatred, violence, and despair.

I owe most of what I know about my cousin and her family to the research of my dear friend Dr. Diana Wagner, Holocaust Educator at Salisbury University (Maryland).  She has been working with the Holocaust Survivors and Victims Resource Center to hand-transcribe hundreds of documents related to the Holocaust, and to make those documents available through the World Memory Project.  I owe a debt of gratitude to Diana for not only my personal knowledge about my own family, but for all of the hours she has put in to make sure that these stories truly will never be forgotten -- and to help us to vow that we will never let such things happen again.
Posted by Gordon Bonnet at 2:18 AM