Over the last few days in my Critical Thinking class we've been critiquing the educational system.  After all, who better to ask than a class full of people who've been immersed in it, been the beneficiaries of the successes and the victims of the failures, for ten or more years?  I find that most of them are reasonable and fair about the assessment -- neither lashing out without justification nor telling me what I think they want to hear.  Their criticisms are reasoned, well supported, and usually spot-on.

But nothing riled them up more than the documentary I showed them on the school systems in Finland.  (The link is to part 1, but you can access it all from there -- the entire thing is an hour long but is well worth the time.)  The documentary was the brainchild of Dr. Tony Wagner of Harvard University, who went to Finland to see if he could find out why Finnish schools routinely rank at the top of any measure you want to apply to them -- whether it's test scores, rigor, success of students in college or career after graduation, innovation, breadth, or depth -- and why we, in a word, don't. 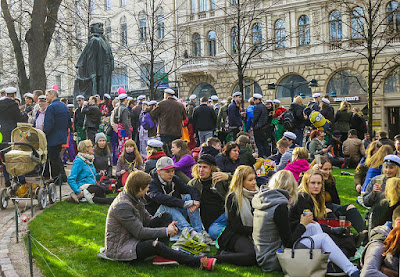 Wagner interviewed teachers, principals, education professors, students, and parents, and came up with the following rather surprising characteristics of Finnish schools:
Of course, I immediately noticed the stark contrast between the Finnish schools and my own.  And I must emphasize that I am lucky to work in the school I do -- we have great students, few problems, and (I believe) a pretty good success rate (again, however you want to measure it).  But of the characteristics I listed above, virtually every one is the opposite of how we approach things here in the United States.

Which makes me wonder if the success we do have is mostly due to the resilience of the students, the dedication of the teachers to rise above adverse circumstances, and a heaping measure of dumb luck.

The one that struck me the most was trust.  Dr. Wagner was talking to one of the teachers over lunch, and walked back with him to his class -- and was astonished to find out that the teacher was twenty minutes late to his own class.  The teacher, for his part, was a little surprised at Wagner's reaction.  "They know what they have to do," the teacher said.  "I don't have to stand over them and force them."

And sure enough, he walked back into the room -- and everyone was busily working.

In American schools, one of the first things that will jump out at you is the lack of trust.  Rules and regulations abound for what you can and can't do, every minute of the day.  Teachers are of the opinion that as soon as they turn their backs, students will stop working.  Administrators feel like they have to micromanage the teachers to make sure they're doing their job.  The state education departments increasingly add evaluations and observations and "quantitative measures" of principals and teachers, so that everything they do is turned into numbers and used as a tool for reward or censure.  The implication is that no one can be trusted, and the more you watch, the more you control, the better the results will be.

It's been long established, of course, that no one works well while being micromanaged -- not children, not adults.  Dan Pink and others who analyze the corporate world have found incontrovertible evidence that when our every move is scrutinized, when it is evident that there is no trust, our productivity decreases -- as does our job satisfaction.

Why, then, do we think that children would thrive in such an environment?

The Finnish administrators whom Wagner interviewed were adamant that the most important piece in their success was trust -- but that it wasn't easy to achieve, because it meant letting go of the fear that when you stop watching, people will stop working.  But if you couple that letting go with making sure that what you are expecting students to do is meaningful, engaging, and interesting, the results are nothing short of spectacular.

The students in my Critical Thinking classes spoke with one voice after watching this documentary: Why on earth do we not try this here?  I didn't have a good answer for that except that we've all become so suspicious of each other -- teachers of students, principals of teachers, state and federal oversight administration of everyone -- that we've become locked into the system even though it demonstrably doesn't work.  Instead of decreasing testing, we've increased it -- and not in any kind of meaningful way.  Just last week poet Sara Holbrook found out that some of her poems were used on the Texas Assessment of Academic Readiness, and when she read the questions, she couldn't answer them.

You read that right.  The students were being presented with questions about her poems and expected to select one right answer when the poet herself had no idea how to determine what the right answer was.  We have become so stuck on a linear, one-right-answer mode that we now do everything that way -- even though it clearly kills creativity, destroys enthusiasm, and (as Holbrook's example shows) isn't reflective of anything meaningful or even real.

It's easy to come up with excuses.  "Finland is wealthier than we are."  "Finns are a more homogeneous society than we are."  The documentary dismisses those out of hand -- actually, we spend more per capita on students than Finland does, and 16% of Finnish students learn Finnish as a second language.

But even if those were true -- even if the hurdles we face are higher than the Finns faced in reconstructing their schools back in the 1970s -- so what?  What, exactly, do we have  to lose?  What we have now is only marginally successful, and in many inner cities is a demonstrable failure.  Our dropout rates are on the rise, and our increasing reliance on trivia-dense "quantitative assessments" do nothing but alienate students and further convince them that school is boring, pointless, and has no connection to real life.

It's time to try something different.

And, after all, the Finns have demonstrated that what they do is successful.  Why not try their model?  Okay, maybe it won't work exactly as it's done in Finland, maybe it'll need some fine tuning and adjustment to meet the different needs of students in our country.  But why not try -- and why wait?  As the adage goes, "If you always do what you've always done, you'll always get what you've always got."
Posted by Gordon Bonnet at 2:18 AM