In the early 1930s, a cadre of scientists in Germany saw the handwriting on the wall with respect to the rising forces of German nationalism, and founded a model for scientific research that they called Deutsche Physik (German physics) or Arische Physik (Aryan physics).  The proponents of this model for science -- including physicists Philipp Lenard and Johannes Stark -- claimed that research had to be state-approved and in line with the ideology of the German nationalist movement, in contrast to the Jüdische Physik (Jewish physics) of Albert Einstein, Erwin Schrödinger, and others.

As the Deutsche Physik movement's stranglehold on science increased, researchers who flouted the new rules were the targets of suppression and outright harassment.  The powers-that-be responded by clamping down further.  All scientific papers had to be approved by a board made up not of scientific peers but of party loyalists.  Because of this, many of the finest minds in Germany fled the country, including not only Einstein and Schrödinger but Leo Szilard, Hans Bethe, Lise Meitner, James Franck, and computer scientist John von Neumann.

When a German journalist spoke to Adolf Hitler about this loss of scientific talent, and asked him who would be the brains of the country if the trend continued, Hitler responded blithely, "I will be the brains."

The new administration here in the United States is evidently taking a page from the Deutsche Physik playbook.  Just yesterday they announced that all research work by scientists associated with the Environmental Protection Agency would have to be evaluated before release on a "case-by-case basis" -- by a panel of non-scientist party loyalists.

And if that doesn't draw the comparison with pre-World War II Germany starkly enough, yesterday the chairman of the House Science, Space, and Technology Committee -- Lamar Smith, who has had this position for years despite having no scientific training whatsoever -- said, "The national liberal media won’t print [the truth about scientific research], or air it, or post it.  Better to get your news directly from the president.  In fact, it might be the only way to get the unvarnished truth."

Who will be the brains of America once all the scientists have fled harassment and the suppression of their research?  Donald Trump will, of course.  Just listen to Dear Leader and all will be well.

The thing is, the universe is not compelled to conform with the political ideology of today's Deutsche Physik movement any more than it was compelled to conform to the one back in 1933. Einstein's Jüdische Physik Theory of Relativity turned out to be correct, and Hitler's insistence on state approval of research, and the resultant brain drain, hamstrung German science for decades.

At least we have some scientists and organizations that are speaking up rather than being cowed.  When the EPA, USDA, and National Parks Service were forbidden to use Twitter and other social media to communicate with the tax-paying public about research and current events (i.e., the facts), many of their staff set up "rogue Twitter accounts" -- allowing free and unfettered communication instead of the two other choices open to them -- quoting the party line, or silence.

But this, of course, is not the way science is supposed to be.  As astrophysicist Katie Mack put it: 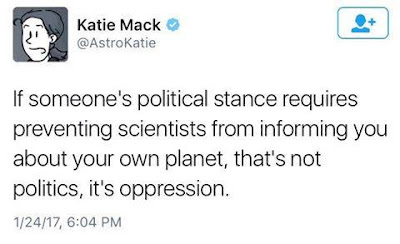 Neither the climate nor anything else in the scientific world is responsive to political spin.  Eventually, of course, this will become apparent regardless, as it did with the German physicists -- when they found out that their anti-relativity, anti-quantum mechanics version of things was simply wrong.  The risk is that by the time that happens, it may well be that our best and brightest will have fled to places where scientific research is supported instead of oppressed.

What we have to ask ourselves is whether this is a risk we're willing to take.

And we also need to ask why it makes sense that we have placed the oversight of scientific research into the hands of non-scientists -- worse, anti-scientists -- like Lamar Smith, Dana Rohrabacher, James Inhofe, and yes, Donald Trump.  Are we truly willing to jettison the last two centuries of scientific advancement and dedication to the scientific method in favor of state-sponsored, state-approved, party-line-only pseudoscience?

Because that is the direction we're heading if we don't start speaking up.
Posted by Gordon Bonnet at 2:08 AM