It's become almost axiomatic that politicians lie, but what I absolutely fail to understand is why we not only cast our votes for proven liars, but give them a pass when they're caught at it.

For the best example of this, we have to look no further than our President-elect.  I'm probably going to be accused of being partisan, here, but I don't care.  Donald Trump's record of telling outright lies goes back far before the election, and honestly, has nothing to do with whether he's a Republican or Democrat.  Here's a sample of the complete, egregious untruths he was guilty of before the citizenry of the United States chose him as their next president:
Had enough?  I haven't even considered the campaign promises he's broken already -- and we're still almost two weeks from the inauguration, for fuck's sake:

And almost no one who voted for him is objecting to this bill of goods they were sold.  I don't care how much I supported someone -- if a candidate I voted for blatantly broke campaign promises before they'd even taken office, I would be pissed.

On the other hand, the one thing you hear his followers yelping about is his following through on his promise to repeal the Affordable Care Act, or "Obamacare" -- something that is now appearing to be a near-certainty.  Sarah Kliff interviewed Trump voters and asked them about how the repeal was going to affect them, and uniformly they said it was going to be terrible.  When she asked them why they had supported Trump, given his unequivocal position on the subject, their responses can be summarized by what one woman told Kliff:  "I guess I thought that, you know, he would not do this, he would not take health insurance away knowing it would affect so many people's lives.  I mean, what are you to do then if you cannot pay for insurance?"

So wait just a minute here.  He lies outright, makes campaign promises and breaks them before he's even been inaugurated, but then he actually does something he promised he's gonna do, and that's what you object to?

Okay, look, I'm not saying other politicians haven't been guilty of hypocrisy, or haven't waffled, evaded, or lied outright: 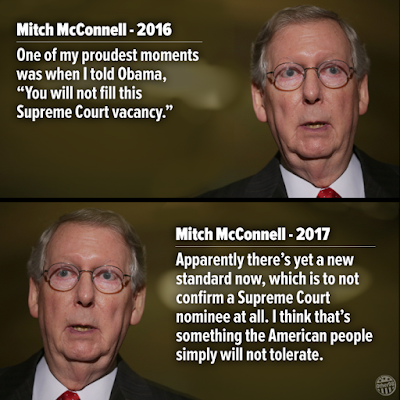 But you know what?  "He does it too!" is not a defense. It's absolutely baffling why we, as citizens, accept such behavior, and more importantly, keep voting these same clowns in.  You hear people complain all the time about how corrupt politicians are, how awful Congress is, how you can't trust any of 'em -- and yet, overwhelmingly, incumbents were voted back in.  In 2016 90% of Senate races went to the incumbent, and 97% of House races -- even though Congress's overall approval rating was 13%.

Can someone please, please explain this to me?

But as far as Trump goes, I can say it no other way: he is a compulsive liar, a con man, who will say anything or do anything to get what he wants.  He is also dangerously impulsive, and already -- again, before taking office -- has endangered our role on the world stage and inflamed tensions with China, Russia, and the Middle East with his incessant loose-cannon tweeting.  We are all going to have to live through what all this will cause, and try as hard as we can to do damage control.  But I'm wondering when the Trump voters are going to realize that he has never had any intent to follow through on anything other than impulse.

To put it succinctly: you've been had.
Posted by Gordon Bonnet at 2:56 AM