The monster in the mist

I thought that after writing this blog for six years, I'd have run into every cryptid out there.  But just yesterday a loyal reader of Skeptophilia sent me a link about one I'd never heard of, which is especially interesting given that the thing supposedly lives in Scotland.

I've had something of a fascination with Scotland and all things Scottish for a long time, partly because of the fact that my dad's family is half Scottish (he used to describe his kin as "French enough to like to drink and Scottish enough not to know when to stop").  My grandma, whose Hamilton and Lyell ancestry came from Fifeshire north of Edinburgh, knew lots of cheerful Scottish stories and folk songs, 95% of which were about a guy named Johnny who was smitten with a girl named Jenny, but she spurned him, so he stabbed her to death with his wee pen-knife.

Anyhow, none of my grandma's stories were about the "Am Fear Liath Mòr," which roughly translates to "Big Gray Dude," who supposedly lopes about in the Cairngorms, the massive mountain range in the eastern Highlands.  He is described as extremely tall and covered with gray hair, and his presence is said to "create uneasy feelings."  Which seems to me to be putting it mildly.  If I was hiking through some lonely, rock-strewn mountains and came upon a huge hair-covered proto-hominid, my uneasy feelings would include pissing my pants and then having a stroke.  But maybe the Scots are tougher-spirited than that, and upon seeing the Am Fear Liath Mòr simply report feeling a little unsettled about the whole thing. 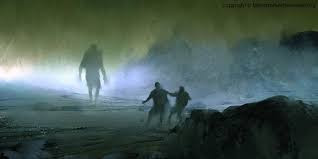 A couple of Scottish hikers being made to feel uneasy

The Big Gray Dude has been seen by a number of people, most notably the famous mountain climber J. Norman Collie, who in 1925 had reported the following encounter on the summit of Ben MacDhui, the highest peak in the Cairngorms:


I was returning from the cairn on the summit in the mist when I began to think I heard something else than merely the noise of my own footsteps.  For every few steps I took I heard a crunch, and then another crunch as if someone was walking after me but taking steps three or four times the length of my own.  I said to myself, this is all nonsense. I listened and heard it again, but could see nothing in the mist.  As I walked on and the eerie crunch, crunch, sounded behind me, I was seized with terror and took to my heels, staggering blindly among the boulders for four or five miles nearly down to Rothiemurchus Forest.  Whatever you make of it I do not know, but there is something very queer about the top of Ben MacDhui and I will not go back there myself I know.

Collie's not the only one who's had an encounter.  Mountain climber Alexander Tewnion says he was on the Coire Etchachan path on Ben MacDhui, and the thing actually "loomed up out of the mist and then charged."  Tewnion fired his revolver at it, but whether he hit it or not he couldn't say.  In any case, it didn't harm him, although it did give him a serious scare.

Periodic sightings still occur today, mostly hikers who catch a glimpse of it or find large footprints that don't seem human.  Many report feelings of "morbidity, menace, and depression" when the Am Fear Liath Mòr is nearby -- one reports suddenly being "overwhelmed by either a feeling of utter panic or a downward turning of my thoughts which made me incredibly depressed."  Scariest of all, one person driving through the Cairngorms toward Aberdeen said that the creature chased their car, keeping up with it on the twisty roads until finally they hit a straight bit and were able to speed up sufficiently to lose it.  After it gave up the chase, they said, "it stood there in the middle of the road watching us as we drove away."

So that's our cryptozoological inquiry for today.  I've been to Scotland once, but never made it out of Edinburgh -- I hope to go back and visit the ancestral turf some day.  When I do, I'll be sure to get up into the Cairngorms and see if I can catch a glimpse of the Big Gray Dude.  I'll report back on how uneasy I feel afterwards.
Posted by Gordon Bonnet at 2:13 AM