At present I've been sent a link five times to a claim that someone near Phoenix, Arizona took a photograph of Satan.

Without further ado, let's take a look at the photo: 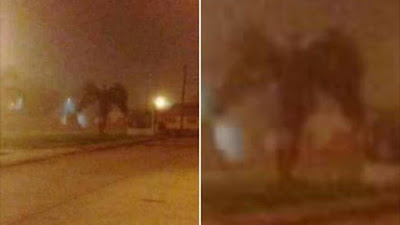 A couple of the people who sent it to me appended messages along the lines of, "Hoo boy.  Look at what people are claiming now."  Two, however, had more noteworthy commentary, which I reproduce in toto below.

You like to scoff about the evil in the world, and claim that our souls aren't in peril.  Satan walks among us.  Unbelievers like you will be the first to be dragged to Hell.

People like Mr. Skeptic doubt evidence for the supernatural when its [sic] right in front of your face.  I wonder what would happen if you saw this with your own eyes.  Would you keep doubting then?  It's easy for Armchair Skeptics to sit in their living rooms and say no, but as soon as you go out in the world you learn that its [sic] not that simple.

Well, predictably, I'm not impressed.  To paraphrase Neil deGrasse Tyson (who in the original quote was talking about UFOs) there probably is an "add demon" function on Photoshop.  My general opinion is pretty consistent with the following: 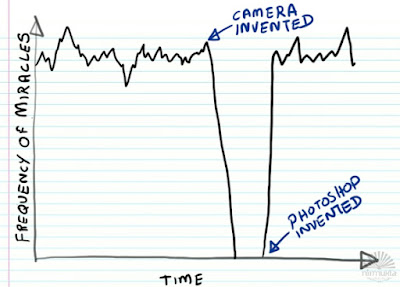 However, the bigger question is why I'm a Scoffing Armchair Skeptic about such matters more has to do with Ockham's Razor.  Ockham's Razor is rightly called a rule of thumb -- something which isn't 100% true but is still a pretty damn good guide to understanding.  The original formulation comes from William of Ockham, a 14th century monk and philosopher, who phrased it as "Non sunt multiplicanda entia sine necessitate" (Don't multiply entities without necessity), but a more modern phrasing is "All other things being equal, of competing hypotheses, choose the one that requires the least assumptions."  (It must be pointed out that Ockham himself was hardly a scientific rationalist; he's also the one who said, "Only faith gives us access to theological truths.  The ways of God are not open to reason, for God has freely chosen to create a world and establish a way of salvation within it apart from any necessary laws that human logic or rationality can uncover."  So while Ockham's Razor is a great idea, I doubt I'd have agreed with him on much else.)

In any case, the Demon of Phoenix certainly is more easily explainable as a hoax than it is that Satan for some reason descended upon southern Arizona, posed for a blurry snapshot, and then disappeared without doing anything else or being seen by anyone else.  So the second submitter is, in a sense, quite right; I would be much more likely to believe that it was real if I did see it with my own eyes.  Just looking at the photograph, here in my Comfortable Armchair, I'm still saying "Nah."

Of course, being dragged to hell would do it, too.  Nothing like a little fire and brimstone to convince one of the reality of a situation.  But until that happens, you can still put me in the "Mr. Skeptic" column.
Posted by Gordon Bonnet at 1:56 AM