I'm not in the habit of using Skeptophilia as a forum to give publicity to weirdos, but sometimes I find a member of the Wingnut Coalition that is so delightfully out there that I just have to tell you about it.

In this case we have a guy who calls himself "Lord Steven Christ."  As if "Christ" was Jesus's last name or something.  (Although musician and stand-up comic Stephen Lynch did riff on this idea in his song "Craig," which is about Jesus's bad-boy brother, Craig Christ.  Note: the song is hilarious, but at the same time runs pretty close to the edge of sacrilege more than once, and is highly NSFW.  You have been warned.)

Anyhow, Lord Steven's website is a sight to behold.  First off, he's very fond of having photographs of himself all over the place, usually shirtless and in mid-flex.  It also has links to three dozen or so videos, the general gist of which is that the Earth is concave and the sky is made of glass.

I'm not making this up.  So now we've gone one step past the Flat Earth lunacy; the Earth is actually shaped like a bowl.  The reason we can't see this -- why, for example, someone with a telescope can't see Japan over there on the other edge of the bowl -- is because "light bends to the center so you can't see the other side."  Whatever that means.  But anyone who doesn't believe this, Lord Steven says, is delusional.  He says that NASA and the other pesky people who investigate the universe and have come up with different answers are "lie-n-tists."

But the most interesting part of his spiel is his take on religion, because in his opinion there should be only one religion, and that is the religion of Lord Steven.  In fact, he wrote a letter to Pope Francis demanding that he turn over the keys to the Vatican forthwith, which I include in toto below because it's just that wonderful:

As your fellow Jesuit colleagues should know very well, I am the Returned Christ.  I am awaiting exaltation to world authority over all mankind.  I am ready to establish my Kingdom.

According to the Malachy papal prophecies, you know that you, by taking on the name Francis di Pietro, have fulfilled the office of the last pope dubbed as Peter Romanus. According to the prophecy you are called to feed the people.  You are to feed them with the truth of the reality of the Kingdom of God, in which I am on the verge of establishing.  You are also commanded to tell the people that I, Christ am back, returned in a new body with a new name "Steven", the Crowned One.  You are commanded to help educate the people of my return and the hoped for liberty and righteousness to all the people that fear my name.

You also should know that I am the "Dreadful Judge" that is mentioned in the Malachy prophecy, which also states that Rome will be destroyed.  I am here to execute judgment upon the entire Earth, and to educate the masses about taking cover prior to the hail descending from the sky, and the sun burning up the Earth.

I am here to implement my universal mark upon humanity.  This will separate the sheep from the goats.  All who submit and wear my Seal of the Living God will be protected and blessed, those who refuse will be left to perish outside of safety.

I command you to conceal not my identity and my message to the masses.  For the time is short and judgment is at hand.  You are to point them to me as the returned Christ.

I expect a quick response from you confirming your obedience to me.

So that's pretty unequivocal.  I haven't heard what, if anything, Pope Francis responded, but I'm guessing that Lord Steven's demands were ignored given that I haven't heard anything about Francis resigning.  As far as the rest of his message, I have to say it's pretty nice of him to Educate the Masses before the hail descends and Earth gets burned up by the Sun, but I'm a little less enthusiastic about Perishing Outside of Safety.

I guess you can't have everything.

He also has other stuff about how he's in favor of the New World Order as long as he gets to be in charge, and that his followers need to get this complicated star-pattern design tattooed on the back of their right hands so he'll know who not to smite.  "Please also be wise and reverent in relating to me," Lord Steven writes, "because there are many proud and bashing people online that do not understand who they are relating to." 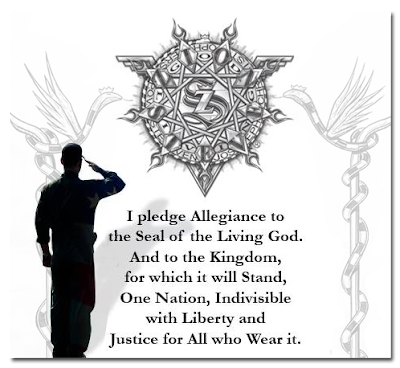 Here's Lord Steven's seal, in case you are interested in a hand tattoo.

Then there's his diatribe against Alex Jones, because apparently Lord Steven is of the opinion that like the Highlander, amongst the wingnuts There Can Only Be One.  He says that Alex Jones is a "child," and that it'd help us to see that if Alex would dress up in a bib and a frilly bonnet and hold a rattle.

Which is a mental image that will forever haunt my nightmares.

So anyhow, the whole thing is highly entertaining, in a weird, performance-art sort of way.  I strongly recommend watching some of the videos.  I watched one of them, after fortifying myself with a glass of scotch, and only twice had to pause it and put my head down on my desk to recover.  After a second glass of scotch, though, some of it actually started to make sense, so I decided I'd better either stop watching or stop drinking.

Which was a rather easy choice to make, honestly.

But I felt obliged to pass along the website to my readers, in the hopes that you'll find it as engaging as I did.  Unless, of course, you're a "proud and bashing person," in which case you'll probably just roll your eyes and stop watching.
Posted by Gordon Bonnet at 2:03 AM