Echoes of the future

A couple of days ago, a reader of Skeptophilia sent me a link to a website that has a compilation of research purporting to show reverse causality -- that the future can influence the past.  More specifically, it describes experiments using random number generators that are alleged to show statistical deviations from randomness shortly before major world events (such as the 2004 Indonesian tsunami).

The website calls this effect retropsychokinesis -- that somehow, people's reactions in the future are reaching backwards and influencing past events.  The person who sent me the link accompanied it with the questions, "What do you make of this?  Can there be anything to this?" 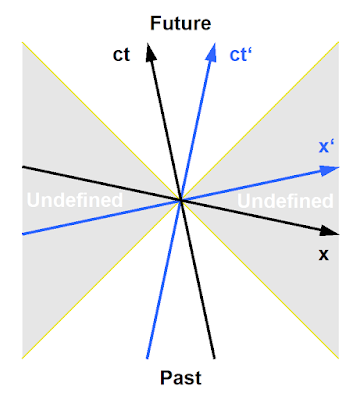 So I spent a couple of hours pawing through the links on the website, and my general reaction is: "not much" and "I don't think so."

My first reaction whenever anyone makes a claim like this is to say, "Show me the mechanism."  If you think that our global consciousness (whatever that means) can alter streams of random numbers generated in the past, then explain to me how that could work.  As far as I can see from the website, any explanations are pretty thin, usually falling back on some vague allusions to quantum indeterminacy:


The existence of this effect (if in fact it does exist) raises some very deep questions concerning the nature of time, the relationship between consciousness and objective material reality, the concept of causality, and the concept of randomness.  The much misunderstood "multiple (or parallel) universes" interpretation of quantum mechanical phenomena has been suggested as part of a model which encompasses the RPK phenomenon.  This in itself raises many important questions.  The idea of "will" is certainly related, as this is the best existing description of that which the subject uses in order to exert an influence.

The second thing, however, is to ask why -- if (for example) some kind of Disturbance in the Force prior to the 2004 tsunami altered the ordinary chain of causality -- the best it could do is to disturb some random number generators.  Seems like if there is an effect (or a cause, or whatever you'd call this), there'd be a bigger result.

Such as an awareness that a disaster was about to happen, allowing people to seek higher ground in time.

But the biggest problem is the quality of the evidence.  Dick Bierman, a RPK apologist, has a statistical analysis of the deviations that have been reported, and the results (according to Topher Cooper), are pretty earthshattering.  "The odds of this sum being this large is one chance in 630 thousand million (what us Yanks call 630 billion)," Cooper says.  "I would say that he [Bierman] was not exaggerating when he said that this is pretty strong evidence that 'something' (other than the null hypothesis) 'is going on'."

Cooper only alludes to the problem with all of this near the end of his analysis.  After going through how amazing the evidence all is he adds, with apparent reluctance, "Whether that 'something' is something interesting (e.g., paranormal) depends on an analysis of the tightness of the experimental protocols."

And therein lies the main problem with this.  Most of the experiments cited in the website, and analyzed by Bierman and Cooper, were run by one Helmut Schmidt.  Schmidt spent his entire life trying to establish proof of the paranormal, and extrasensory perception in particular, and his results are generally considered to be flawed.  As James Alcock wrote in The Skeptical Enquirer:


Schmidt’s claim to have put psi on a solid scientific footing garnered considerable attention, and his published research reported very impressive p values.  In my own extensive review of his work, I concluded that Schmidt had indeed accumulated impressive evidence that something other than chance was involved (Alcock 1988).  However, I found serious methodological errors throughout his work that rendered his conclusions untenable, and the “something other than chance” was attributable to methodological flaws.

Blunter still was the assessment by Victor Stenger, professor of physics and astronomy at the University of Hawaii:


Olshansky and Dossey argue that quantum mechanics provides a physical basis for retroactive prayer.  They refer to experiments by Helmut Schmidt in which humans attempt to mentally affect radioactive decays, which are inherently quantum events.  While Schmidt claims positive results, his experiments also lack adequate statistical significance and have not been successfully replicated in the thirty-five years since his first experiments were reported.

So predictably I'm unimpressed.  It's not that reverse causality not an intriguing idea; something like it was the genesis of my novel Lock & Key, not to mention the plots of about a dozen episodes of Star Trek: The Next Generation.

But all of those have in common that they're fiction.  If you're expecting me to buy that such a thing has a basis in reality, I'm going to need a little more than some questionable (and apparently unreplicable) experiments with random number generators.
Posted by Gordon Bonnet at 2:09 AM