By now, most of you have heard about the Bowling Green Massacre, a horrific attack by Iraqi immigrant terrorists in Bowling Green, Kentucky, which Trump spokesperson Kellyanne Conway cited as yet another reason we shouldn't accept Muslim immigrants into the United States.  "I bet it’s brand new information to people that President Obama had a six-month ban on the Iraqi refugee program after two Iraqis came here to this country, were radicalized and were the masterminds behind the Bowling Green massacre," Conway said.  "Most people don't know that because it didn't get covered."

Well, as everyone in the United States, with the possible exception of Donald Trump, knows by now is that the reason it didn't get covered is that it never happened.  Kellyanne Conway, whose job description seems to include "make up random shit if it supports what Trump is currently doing," eventually admitted that she'd "made an honest mistake," which is apparently how this administration is labeling outright, bald-faced lies.  The admission, however, didn't stop her from being excoriated on social media. 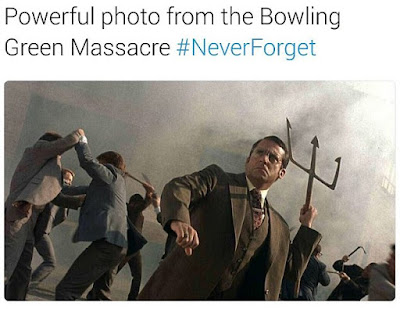 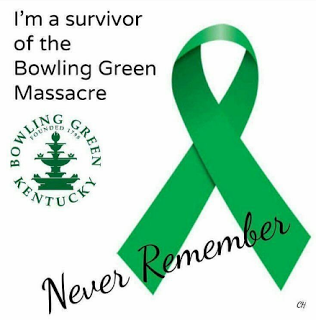 Or, best of all, if you'd prefer a twofer:

But because there's no story so weird that people can't work together to make it way weirder, just a couple of days ago claims began popping up on woo-woo websites claiming that yes, actually there was a Bowling Green Massacre, it just happened in an alternate timeline that for some reason only a few of us remember.

Thus, we can add the Bowling Green Massacre to the Berenstain Bears and Nelson Mandela's untimely death as another example of... the Mandela Effect.

The Mandela Effect, you probably know, is a phenomenon wherein someone (or several someones) recalls the past differently than the rest of us, and rather than doing what most of us do, which is to say, "Huh.  I guess I'm remembering wrong, then," said individuals decide that what happened is they have side-slipped into our world from an alternate path in the multiverse in which the event in question (such as the annoyingly moralistic cartoon bears being the Berenstein, rather than Berenstain, Bears) actually is reality.

Here's how one commenter describes his confusion over the imaginary Massacre:


I know the press is (unfairly?) hammering Kellyanne Conway about this and everyone just assumes she made it up, but does anyone else remember an actual Bowling Green Massacre?

And I’m not talking about the arms smuggling scheme or whatever that all of the articles I’ve read seem to think she might have been talking about.  I mean an actual, honest-to-goodness terrorist attack.

I definitely recall a bombing in Bowling Green that killed … maybe a dozen people?  I think it happened either at the end of the Bush administration or the first month of the Obama administration.  I’m pretty sure it involved a suicide bomb being set off on a city bus.  The way I remember it was a young Muslim guy–he could have been in his late teens, possibly early twenties? (I’m ashamed to admit this, but I remember seeing his pictures on the news and thinking he was kind of cute.)  He hid an IED inside a dufflebag or knapsack or something and I think he detonated it using an ipod or some kind of portable music player.

Later, they arrested a second, older Muslim guy.  I think he was responsible for building the bomb.  They were definitely both Iraqi refugees, like Conway said.

Which all sounds pretty persuasive, except for the fact that -- allow me to reiterate -- none of it happened.  But dozens of people chimed in about how yeah, they remember it too, and they added more details about the attackers and the victims and the aftermath, and the whole thing is showing every sign of snowballing.


So I guess there is no end to the mental gymnastics people will go through to avoid being wrong about stuff.  Me, I tend to agree more with Neil deGrasse Tyson: "We have a high opinion of our own brain as a data processing device, when in fact we should not."  Experiment after experiment have shown that our recollection of the past is incomplete at best and full of false memories at worst.  For me, the Ockham's Razor-ish explanation requiring the least ad hoc assumptions is that we're really prone to remembering things wrong, and some of us (e.g. Kellyanne Conway) make the problem significantly worse by inventing new fake stuff to confuse us further.

Of course, there'll be those that disagree with me.  The multiverse is real, and there's a parallel timeline in which Kellyanne Conway doesn't lie every time she opens her mouth.  Those of us who don't recall the Massacre simply live in what one person referred to as a "BGM-null universe."