Because I apparently don't have enough to worry about, as a teacher, with the approval in Senate committee of the amazingly unqualified Betsy DeVos as Secretary of Education, yesterday I found out that Donald Trump has tapped Liberty University President Jerry Falwell, Jr. to lead a task force for reforming higher education.

Liberty University, which shares with Bob Jones University the moniker "The Buckle on the Bible Belt," has achieved notoriety among science-minded types for their staunch determination to teach young-Earth creationism as if it were actual, evidence-supported science.  They hire faculty on the basis of belief in YEC; an advertisement in the Chronicle of Higher Education said they were "seeking faculty who can demonstrate a personal faith commitment to its evangelical Christian purpose... compatibility with a young-earth creationist philosophy [is] required."  (Although it does make one wonder why anyone would want to teach there who wasn't a biblical literalist, a question I've also asked about the religious-belief requirement for working at Ken Ham's Ark Encounter.)

But about the scientific validity of what they're teaching, I can't put it any better than Richard Dawkins did:


If it's really true that the museum at Liberty University has dinosaur fossils which are labeled as being 3,000 years old, then that is an educational disgrace.  It is debauching the whole idea of a university, and I would strongly encourage any members of Liberty University who may be here, to leave and go to a proper university.

So the leader of this institution is the man who is being entrusted with the task of "reforming higher education."

Look, this goes beyond political affiliation.  There are plenty of conservative Republicans who are qualified to run the Department of Education and/or lead a reform of the American college system.  My contention is simply that Betsy DeVos is a doctrinaire know-nothing whose primary qualification seems to be that she gave big donations to the Trump campaign, and Jerry Falwell is a Christian extremist whose choice was almost certainly motivated by Trump's continual pandering to the religious right, who (for reasons that still escape me) continue in their support of him despite his lies, ego, narcissism, and long history of sexual assault and serial adultery.  (I am honestly looking forward to the next time a Trump supporter uses the term "values voter" or "family values," so I can laugh directly into their face.)

And it also brings up the question of what, exactly, Trump thinks needs to be reformed about colleges and universities.  About all I could find on that note are that Falwell believes there are "too many regulations" (this is becoming something of a mantra of this administration) and that colleges are "too liberal."

Well, Jerry Falwell is certainly the man to combat the latter.

But that's the pattern being established here; appoint people to government agencies whose aims apparently include destroying the agency they're leading.  Just two days ago, we had the announcement that Trump had appointed Kenneth Haapala, of the climate-denying, petroleum-funded "think tank" Heartland Institute, to be on the committee that oversees appointments to the National Oceanic and Atmospheric Administration.

You read that right.  A guy who thinks that climate change is a hoax is going to be helping to lead the agency that monitors climate change.

If that wasn't enough, Representative Matt Gaetz of Florida has just drafted a bill to close the Environmental Protection Agency entirely.  Apparently appointing Oklahoma Attorney General Scott Pruitt, a staunch fossil fuel advocate who is also a climate change denier, to the post of head of the EPA wasn't sufficient.  Gaetz writes:


Our small businesses cannot afford to cover the costs associated with compliance, too often leading to closed doors and unemployed Americans.  It is time to take back our legislative power from the EPA and abolish it permanently...  Today, the American people are drowning in rules and regulations promulgated by unelected bureaucrats, and the Environmental Protection Agency has become an extraordinary offender.

You have to wonder whether Trump's insistence on smashing the EPA might have something to do with his own businesses -- i.e., yet another conflict of interest.  Lest you think I'm engaging in idle speculation, here, take a look at this story that ran in The New York Times just yesterday. It describes a situation in South Carolina where Donald Trump, Jr. started a business venture called Titan Atlas Manufacturing, which tanked -- until Donald Sr. bailed him out by buying the failed business through a new company called "D. B. Pace" created solely for that purpose.  The problem is that Titan Atlas had allegedly been responsible for pollution and groundwater contamination at the site, and Donald Sr. and D. B. Pace are attempting to evade responsibility for the cleanup by claiming that the new company had nothing to do with the damage.

Got it in one.

It's gotten to the point that I'm reaching outrage saturation.  I can barely even stand to look at the news lately, for fear of what new lunacy has been perpetrated by our leaders. 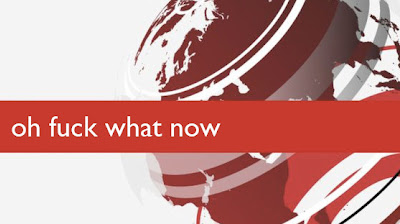 I have never before had so little faith that the people running our government have our best interest in mind, have any kind of foresight about what effects their actions will have, have the least idea what they are doing, or are actually even sane.

What I'm wondering about is damage control.  How can we minimize the havoc that will result from having dramatically unqualified people running things -- or appointing people unshakably hostile to the departments they're overseeing?  I wish I had a good answer to that.

Of course, at the moment, I'm having a hard time even answering the question, "Why am I not curled up in the corner of my office, weeping softly?"
Posted by Gordon Bonnet at 2:06 AM