Reaching for the stars

It has long been one of my dearest wishes to have incontrovertible evidence of extraterrestrial intelligence in my lifetime.  I've been a staunch supporter of SETI; in fact, my screensavers both at home and at work are from "SETI at Home," which pilfers a little bit of the computing power of computers that are on but not currently being used to analyze signals from the Arecibo Radio Telescope for signs of extraterrestrial communications.  My classroom walls have lots of ET-related stuff, including a poster from the Roswell UFO Museum, a sky map showing the location of various exoplanets, and Fox Mulder's "I Want To Believe" UFO poster.

Unfortunately, though, SETI has thus far come up empty-handed, and the accounts of UFO sightings have been, one and all, beneath the threshold of evidence that most of us science-minded types would be willing to accept.  And honestly, it's unlikely that ET, should it exist, has come here.  The distances involved are simply too big.  The same barrier (even more unfortunately) prevents us from going there.  Until Zefram Cochrane invents the warp drive, we're pretty much Solar System-bound. 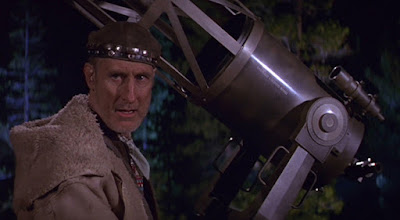 But that doesn't mean we can't explore -- we just have to find a different way.

One of the most intriguing ones I've seen I had never heard of until yesterday.  Called "Breakthrough Starshot," this is an initiative to send unmanned probes out using the idea of a light sail -- a lightweight craft propelled by light pressure -- to Proxima Centauri, the nearest star to the Sun, which just last year was shown to have an exoplanet of its own.  The Breakthrough Starshot site says:


In the last decade and a half, rapid technological advances have opened up the possibility of light-powered space travel at a significant fraction of light speed.  This involves a ground-based light beamer pushing ultra-light nanocrafts – miniature space probes attached to lightsails – to speeds of up to 100 million miles an hour.  Such a system would allow a flyby mission to reach Alpha Centauri in just over 20 years from launch, beaming home images of its recently-discovered planet Proxima b, and any other planets that may lie in the system, as well as collecting other scientific data such as analysis of magnetic fields.

Breakthrough Starshot aims to demonstrate proof of concept for ultra-fast light-driven nanocrafts, and lay the foundations for a first launch to Alpha Centauri within the next generation.

The cool thing about this is that it removes not only the distance barrier, but eliminates one of the biggest concerns -- which is how, even if we could achieve the kinds of speeds Breakthrough Starshot talks about, we could protect the crew of a manned mission from the effects of being in space for that long.  Just a few weeks ago, a study of identical twins Mark and Scott Kelly showed that Scott, who had just come back from a year aboard the International Space Station, had significantly less bone density than his brother.  (Scott also showed a slight lowering of cognitive function, but it is uncertain if that was an effect of the mission.)

So it's pretty certain that long-term space travel will result in some fairly major changes in metabolism and bodily function, not to mention the psychological strain of being cooped up for years on a spacecraft millions of miles away from terra firma.  The idea that we could get the information we're looking for remotely, without risking human life, is pretty exciting.

Breakthrough is also sponsoring two other programs besides Starshot:


Breakthrough Listen is a $100 million program of astronomical observations in search of evidence of intelligent life beyond Earth. It is by far the most comprehensive, intensive and sensitive search ever undertaken for artificial radio and optical signals. A complete survey of the 1,000,000 nearest stars, the plane and center of our galaxy, and the 100 nearest galaxies. All data will be open to the public.

Breakthrough Message is a $1 million competition to design a message representing Earth, life and humanity that could potentially be understood by another civilization. The aim is to encourage humanity to think together as one world, and to spark public debate about the ethics of sending messages beyond Earth.

Of the three, however, Starshot is the most exciting to me.  Just the idea that we might, in my lifetime, receive digital images of a planet revolving around another star is one of the most thrilling things I can think of.

So keep your eye on the Breakthrough Project.  It sounds like they're going about things the right way, and that this might be our best hope for finding out if we have neighbors.

Until Zefram Cochrane comes along, of course.  After that, screw being here, I'm going boldly where no one has gone before.
Posted by Gordon Bonnet at 3:27 AM