In psychologist Jonathan Haidt's seminal talk "The Moral Roots of Liberals and Conservatives," he makes an intriguing statement:  "The great conservative insight is that order is really hard to achieve, it's really precious -- and it's really easy to lose."

While I buy Haidt's basic premise -- and you should watch the talk, his claims are fascinating and well backed up by evidence -- I can't help but feel that a significant fraction of today's self-styled conservatives have completely gone off the rails.  True conservatism entails a respect for the rule of law, and protection of the interests of one's own community, state, and country.

In the last few weeks, this has been replaced by a reckless disregard for anything but consolidation of power at any cost.

We have a president whose actions seem hell-bent on alienating every ally we have, and just in the last three days included his disrespectful phone call to the Prime Minister of Australia and a veiled threat to send the military into Mexico to deal with the "bad hombres" down there.  Worse still is the sense that Trump has no real understanding of history or knowledge of international policy; in a conversation with German Chancellor Angela Merkel last week, she had to explain to the President what the terms of the Geneva Convention are.

The most frightening thing of all is his capacity for whipping his followers into a frenzy, and their single-minded devotion to him.  People who have received national attention after criticizing Trump have received credible death threats.  Even smaller fish like myself have felt the backlash of questioning Dear Leader; one of my previous posts, in which I asked "what would it take to convince you that you were wrong about Donald Trump?", was vehemently labeled as "psychological manipulation" by one reader.  Ruth Ben-Ghiat writes, in an article in The Atlantic:


Authoritarianism needs that predator edge; that shared understanding that the leader’s body carries within it the potential for violence– and the power to make it difficult to prosecute him.  Trump’s attacks on women; his targeting of Muslims, Mexicans, immigrants, and others as dangers to the nation; and the threats from his supporters against the lives of ordinary citizens that follow his criticisms of them on Twitter (such as the union leader Chuck Jones and the college student Lauren Batchelder) all go into the category of things it’s safer not to talk about.  Normalization is actually decriminalization, a willingness to forget that such things were once thought of as lawless behavior.

All of this is symptomatic of a trend I'm seeing toward cronyism and loss of transparency and suppression of dissent.  And if the signs themselves aren't scary enough, read the article "Wait Calmly," by Volker Ullrich, that appeared in the German news source Die Zeit yesterday.  It chronicles the responses of German politicians to the rise of Adolf Hitler -- and how, across the board, the general reaction was, "It'll be fine."  In early 1933, the newspaper Deutsche Allgemeine Zeitung published an editorial in which the author stated that he was willing to wait to see if Hitler  would prove "whether he really had what is needed in order to become a statesman."  His ignorance of policy and law was excused, with his followers saying that it was more important that he rebuild Germany as a nation than it was for him to be well informed.

Even after Hitler became chancellor and began to purge the opposition, the "it couldn't happen here" sentiment was rampant. Theodor Wolff, the editor-in-chief of the Berliner Tageblatt, said that even if Hitler wasn't a nice guy, in Germany there was a "border that violence would not cross."  Germans, Wolff said, would protect the "freedom of thought and of speech," would create a "soulful and intellectual resistance" that would prevent Hitler ever from becoming a dictator.

Most appallingly, the chair of the Central Association of Germans of Jewish Faith said, "In general, today more than ever we must follow the directive: wait calmly."

This was printed on January 31, 1933.  Five months later, Hitler and his cronies had suspended the German constitution and fundamental human rights, eliminated political parties, required that radio and newspapers release news that was consistent with the National Socialist party line, and stripped Jews of their equality under the law. 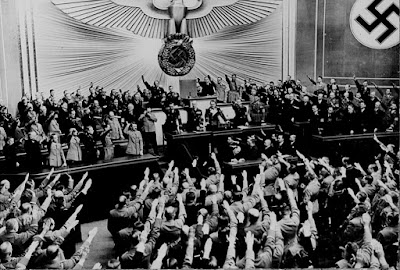 If that parallel isn't terrifying enough, consider a second one: the similarities between what is happening right now in the United States and the rise of Hugo Chávez in Venezuela.  As Andrés Miguel Rondón lays out in his article "In Venezuela, We Couldn't Stop Chávez.  Don't Make the Same Mistakes We Did," Chávez rose to power on much the same kind of wave that Trump has -- populism, nationalism, breaking off ties to allies who were perceived as exploitative or hostile, demonizing the opposition, and playing the role of a plain ol' guy who is just brutally honest and "speaks his mind."  Rondón writes:


The Venezuelan opposition struggled for years to get this. We wouldn’t stop pontificating about how stupid Chavismo was, not only to international friends but also to Chávez’s electoral base.  “Really, this guy? Are you nuts?  You must be nuts,” we’d say.

The subtext was clear: Look, idiots — he will destroy the country.  He’s blatantly siding with the bad guys: Fidel Castro, Vladi­mir Putin, the white supremacists or the guerrillas.  He’s not that smart.  He’s threatening to destroy the economy.  He has no respect for democracy or for the experts who work hard and know how to do business.  I heard so many variations on these comments growing up that my political awakening was set off by the tectonic realization that Chávez, however evil, was not actually stupid.

Neither is Trump: Getting to the highest office in the world requires not only sheer force of will but also great, calculated rhetorical precision.  The kind only a few political geniuses are born with and one he flamboyantly brandishes.

Chávez died in 2013, and Venezuela still hasn't recovered from the years of isolationism, corruption, and damage to the governmental infrastructure.  In October of 2016, it was declared by CNN Money to be "the world's worst economy" despite having some of the largest known oil reserves, and there are now widespread shortages of food, medicine, and other necessities, even among the former Venezuelan middle class.

The problem is, the message coming from the Trumpian populists -- I'm not going to slander actual conservatives by using that term -- has been amazingly successful, as Hitler's and Chávez's were before him.  Don't believe the media, they're lying.  Fight like hell against people who criticize Dear Leader.  Anyone who objects to what Trump, Bannon, Spicer, McConnell, Ryan, and others are doing is at best a "whiny, fragile snowflake," simply throwing a snit fit over having lost, and at worst a traitor to America.

In other words, don't question anything that comes from the Party, but ignore everything else.

People keep saying "it can't happen here."  We're not the Weimar Republic, we're not pre-Chávez Venezuela.  What terrifies me is that the same sentiments were widely spoken in the Weimar Republic and pre-Chávez Venezuela only months before dictatorship emerged.  Every democracy thinks it can't fail, can never be upended by fascism -- until it happens.

My own personal difficulty with fighting all of this is that I was taught by my (very conservative) parents to play fair, be nice, not pick fights, stay respectful, let others have their opinions.  But that, I think, is no different than the chair of the Central Association of Germans of Jewish Faith telling his constituents to "Wait calmly."  We can't be silent.  We have to challenge these people on their own turf -- while we still have a chance to.

I'll end with a quote from J. R. R. Tolkien's The Two Towers that I've always thought was heart-wrenchingly poignant.  When King Théoden of Rohan is facing legions of Orcs swarming into Helm's Deep with the intent of slaughtering his people, he looks down on them in despair and says, "What can men do against such reckless hatred?"

And Aragorn replies, "Ride out to meet them."

To which I can only respond: Amen.
Posted by Gordon Bonnet at 2:37 AM