There was a bit of an uproar amongst science-minded types in New Mexico last year when it became known that Dr. Christopher Dyer, executive director of the University of New Mexico - Gallup, had allowed the university to sponsor a conference and an expedition to hunt for Bigfoot.

Dyer himself is an anthropologist, and therefore should know better.  But this didn't stop him from throwing himself and his school into the event.  Speakers were given honoraria up to $1,000, plus reimbursement for airfare, food, and lodging,  Expedition participants were even given snowshoes -- again, at the expense of the university.

Below is a jpg of the poster for the conference, courtesy of the wonderful site Doubtful News: 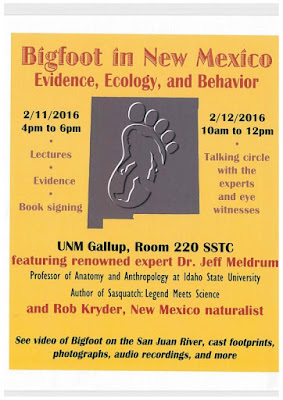 For those of you not up to date on your cryptozoology, Jeff Meldrum is the guy who along with Melba Ketchum was responsible for a lot of the pseudoscientific "Bigfoot is too real!" nonsense that's been around in the last few years.

And Meldrum is not the only one with a dubious background.  "New Mexico naturalist Rob Kryder" is also a True Believer, who thinks that the aforementioned Melba Ketchum's "study" was completely convincing despite the fact that her citations were bogus, and her data consisted of a rambling screed that can be summed up as "We have proof, dammit."

Kryder got into a snarling match with KRQE, the station that broke the story about the university-funded goodies all of the participants were getting.  Kryder didn't like the skew eye he and his fellow squatchers were being given, and responded thusly:


BIGFOOT IS A REAL SPECIES/PROOF
To KRQE: In response to your pseudo-investigation and false and misleading special report on the UNM/KX Bigfoot study, the evidence, funding and the blatant lie to the public about the proof of the species.  We at KX challenge you, KRQE to send your presumptious and biased investigative reporter Larry Barker out in the field for just 12 hours with my team.  And if you do, and Larry B isn’t a BF believer by morning, we agree to do all posssible to raise the $7k and pay back the #UNM account for the cost of the public disclosure conference on behalf of Dr Dyer. — The location – The Sandia Mountains just outside Alb NM, home of #KRQE and Larry Barker.  And after, to interview myself and Jeff Meldrum to present the truth of the matter.

So take that.  Of course, KRQE declined to take Kryder up on his offer, but instead decided that if the squatchers wanted to play hardball, they'd be happy to join in.  Larry Barker contacted Senator George Munoz, who is on the State Legislative Finance Committee, and Munoz decided that enough was enough.  So he sponsored a bill making it illegal to hunt Bigfoot on the taxpayer dime.  Here's the text of the bill:


Public funds shall not be expended by a state higher educational institution for the purpose of looking for or catching a fictitious creature, including:
(1) bigfoot;
(2) sasquatch;
(3) yeti;
(4) abominable snowman;
(5) Pokémon;
(6) leprechauns; or
(7) bogeyman.

I have to say that I love that he included Pokémon.  But it does leave open hunts for El Chupacabra, for which New Mexico has been an epicenter of sightings.  My feeling is if you don't include El Chupacabra, and Sheepsquatch while you're at it, you may as well not bother.


But it's certainly a step in the right direction.  I know I wouldn't be happy if Cornell was sending biologists up to our local cryptid hotspot, Connecticut Hill, to look for the famed Connecticut Hill Monster.  As much as I'd love it if there actually was some sort of weird creature stalking around in the woods only twenty miles from my house, the funding for finding it really shouldn't be defrayed by the government or taxpayer-funded institutions of higher learning.

So it'll be interesting to see if the bill gets passed, and more importantly, if other states follow suit.  I'll also be waiting to see what rejoinders Kryder and Meldrum have for Senator Munoz, because you just know they won't take this lying down.  And if they get Melba Ketchum involved, we'll really have a battle royale going.  I can barely wait.
Posted by Gordon Bonnet at 2:32 AM