The devil made me do it

One of the human tendencies I find the hardest to comprehend is the bafflement some people feel when they find out that there are people who disagree with them.

Being a center-left atheist from conservative, Christian southern Louisiana, I have never been under the illusion that everyone agrees with me.  Further, I am convinced that the people who do disagree with me are, by and large, good, kind, honest people who believe what they do for their own heartfelt reasons.  While we've come to differing conclusions about the way the universe works and how governance should happen down here on Earth, mostly we respect each other despite our differences, and mostly we get along pretty well.

But there's a contingent on both sides of the spectrum who seem entirely incredulous that people who disagree with them actually exist.  And I ran into several interesting examples of this just yesterday, revolving around leaders of the Religious Right who are so befuddled by the fact that there are folks who don't support Donald Trump that they can only explain it by proposing that said dissenters are motivated by Satan.

Starting with Pastor Lance Wallnau, who was asked on The Jim Bakker Show what he thought about the Donald Trump's inauguration.  Wallnau replied:


What I believe is happening is there was a deliverance of the nation from the spirit of witchcraft in the Oval Office.  The spirit of witchcraft was in the Oval Office, it was about to intensify to a higher level demon principality, and God came along with a wrecking ball -- Trump -- and shocked everyone, the church cried out for mercy and bam—God knocked that spirit out, and what you’re looking at is the manifestation of an enraged demon through the spirit.

So, of course, only people under the influence of the devil himself would object to all of this.  About the Women's March on Washington, he said that the people who showed up to celebrate Trump were motivated by god, and the people who protested... weren't:

Wallnau isn't the only one who ascribes criticisms of Trump to a demonic source.  Rick Wiles, conspiracy theorist par excellence and purveyor of End Times nonsense, said that Satan was involved -- but so was Satan's right-hand man here on Earth, none other than Barack Obama:


We are witnessing a full-blown Marxist/communist resistance movement, a revolution in America.  The chief banker funding the Purple Revolution is billionaire George Soros and the chief community organizer directing the insurrection in the streets is none other than Barack Hussein Obama …  My gut feeling says Barack Obama is on the phone day and night and he is directing the protests, he is organizing, he is giving clear instructions to the people what to do and how to carry it out.

This is outright sedition, and we have laws in the United States against sedition….  What the Democrats are doing, and the news media and the Obamanista bureaucrats inside the government agencies, what they are doing is, these are acts of sedition.

You wanna get God worked up?  You know what sedition reminds Him of?  Lucifer.  It all goes back to Lucifer because what Lucifer did in heaven was commit sedition …  So all acts of sedition are inspired by Lucifer.

Those who are opposing Trump are not only breaking the laws against sedition, but are also breaking God’s laws.

Not to be outdone, Pat Robertson had to join in the fray, and said this week on his show The 700 Club that not only are the protests motivated by Satan, they're not even real:


They’re paid for, many of them, and George Soros and those like him are paying the bill to make all these demonstrations look like the nation is rising up against this ban; it’s not. The people of America want to be safe from terrorists.

Okay, it's not that I expect these three guys and others like them to do anything but celebrate Trump from the rooftops, although I am still a little mystified at how the family-values, Ten-Commandments-touting, live-like-Jesus Christian Right ever embraced someone like Donald Trump in the first place.  Given that now Trump is their Golden Boy, I suppose they have their reasons.  But what I completely fail to understand is how you can be so wedded to your worldview that the only way you can conceive of people disagreeing with you is by postulating that they must be motivated by Satan.

Or, at the very least, Barack "Antichrist" Obama. 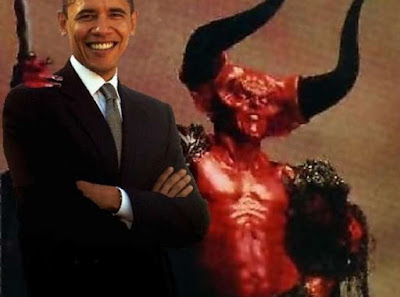 I've recommended more than once Kathryn Schulz's amazing TED Talk "On Being Wrong," in which she makes a powerful case that we not only need to be aware that others can disagree with us without their being stupid, evil, deluded, or immoral, but that considering the possibility that we ourselves might be wrong about our views is one of the most mind-altering, liberating steps we can take.  In any case, being so invested in our theories that we have to ascribe our own views to god and our opponents' views to the devil seems to me to be so arrogant as to be entirely incomprehensible.

So maybe there are people whose existence baffles me, after all.
Posted by Gordon Bonnet at 2:59 AM