The eyes have it

Two nights ago I had dinner with some friends at my favorite local eatery, Atlas Bowl (best burgers I've ever had, bar none), and true to form I arrived ten minutes before they did.  So I was sitting at the table waiting for them, having a nice cold pint of beer, and I happened to overhear a conversation going on at the next table.

A very earnest, if hipsterish, young man with a fedora and a goatee was holding forth to two women about a mutual friend.  "He's trying change his eye color using meditation," he said.

One of the women sounded a little dubious.  "Really?  How would that work?"

"Have they changed yet?" the other woman asked.

As for me, I was trying to give no indication that I was eavesdropping, but I'm afraid that I was sitting there looking like this: 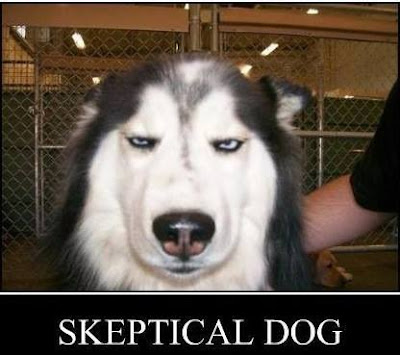 After a few minutes, my friends showed up, and some time into our meal (after the folks at the next table had finished dinner, paid up, and left), I told them about the conversation.

One of my friends gave me an incredulous look.  "Dude," he said, "does this loopy shit follow you around, or something?"

Sadly, I think he might be correct.  I do seem to overhear or otherwise run into more "loopy shit" than most people -- or perhaps it's just dart-thrower's bias.  I've simply trained my mind to be more aware of it, so I notice it more often than other people might.

Anyhow, when I got back home, I thought, "how widespread is this claim, that you can change your eye color through meditation?"

So I googled it.

Holy crap.  It turns out this isn't just one misinformed hipster.  This is actually a big thing.  There are multiple websites and YouTube videos about it, giving you helpful directions on how to end up with purple eyes (or whatever color you prefer).  And I'm thinking, "How have I not heard about this before?" 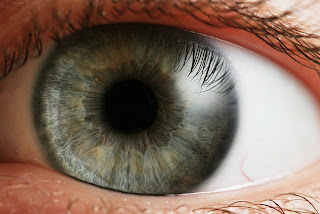 The whole thing is called biokinesis, and is used not just to change your eye color, but to change your hair color, hair texture, skin color, presence or absence of freckles, height, and (go big or go home) your DNA.  Check out this website, wherein we are given as proof a highly convincing gif of a girl who blinks and her eyes change from dark brown to light blue.

So how does this work?  I mean, it doesn't, but how do they claim it works?  Perhaps a direct quote would explain it best:


The Secret is the belief, it is the faith that does not doubt or questions, but one that really felt with emotion and feeling, without faith or belief not we as people, because we have something called Subconscious that creates our reality on the basis of the experiences that we've had in this plan that we call "reality" if it were not our 5 senses do not know how this is really the world, or we think it is.

Open the mind my friends to quantum physics is there to prove things that until then were seen as "science Fiction" or "Illusion", are now making much more sense than the physics of Newton had.

QUANTUM PHYSICS HAS ABSOUTELY NOTHING TO DO WITH CHANGING YOUR HAIR COLOR THROUGH SUBCONSCIOUS FAITH BECAUSE YOU BELIEVE YOU SHOULD HAVE CURLY BLACK LOCKS, YOU FUCKING LOON.

But really.  I'm all in favor of meditation, but your eye color (and all of the other characteristics aforementioned) are not going to change simply because you wish you had sparkling blue eyes.  The fact is, there's this pesky little thing called DNA that controls your eye color.

Oh, wait.  The biokinesis people think meditation can change that, too.

I truly understand people's wish to have reality be other than it is, all the way down to being dissatisfied with our appearance.  I have fervently wished for some years that my hair color was other than the rather indeterminate shade of dirty blond I was handed by my parents, and heaven knows I'd improve my other features if I could.  But barring plastic surgery, which I am nowhere near vain enough to go for, there aren't any other options.

Not even "meditating about quantum physics."

But I do have to wonder why I run into this stuff so often.  At least I had enough common sense not to turn to the guy at the next table and say, "Um, you do realize that's ridiculous, right?"  I felt like I had no choice but to tell my loyal readers about it, however.

And if the young hipster who was sitting next to me a couple of nights ago should read this, allow me to apologize if I snorted into my beer a couple of times over something you said.  Don't take it personally.  It's an involuntary reaction I have when people around me talk bullshit, especially when it has to do with purple eyes.
Posted by Gordon Bonnet at 2:00 AM