The specter of bias

Back in 2005, a study by David Kelly (of the University of Sheffield) et al. showed something simultaneously fascinating and unsettling; that racial bias begins to crop up in children as early as three months of age.  The authors write:


Adults are sensitive to the physical differences that define ethnic groups.  However, the age at which we become sensitive to ethnic differences is currently unclear.  Our study aimed to clarify this by testing newborns and young infants for sensitivity to ethnicity using a visual preference (VP) paradigm.  While newborn infants demonstrated no spontaneous preference for faces from either their own- or other-ethnic groups, 3-month-old infants demonstrated a significant preference for faces from their own-ethnic group.  These results suggest that preferential selectivity based on ethnic differences is not present in the first days of life, but is learned within the first 3 months of life.

I suspect, although this is yet to be rigorously tested, that this tendency of like-prefers-like comes from the fact that in our ancestors, strangers -- i.e., people who don't resemble us -- were more likely to be dangerous.  A built-in tendency to develop an aversive response to faces that look different is unfortunate, but certainly understandable given the fact that our forebears, in the words of Thomas Hobbes, lived lives that were "nasty, poor, brutish, and short."

It's easy enough to think that by the time we become adults, most of us have unlearned these natural tendencies.  I consider myself to be unbiased with respect to race or ethnicity -- and I suspect most of my readers think the same thing about themselves.  But a pair of studies that just appeared last week that appeared in The Journal of Experimental Social Psychology give us the uncomfortable truth that racial and ethnic bias may not be that easy to expunge. 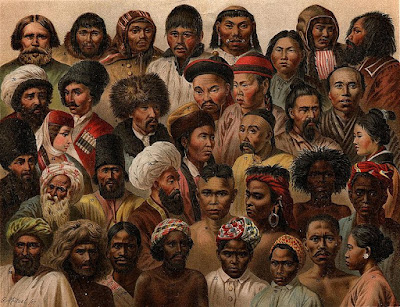 Let's start with the one called, "Whites Demonstrate Anti-Black Associations But Do Not Reinforce Them," by Jordan Axt and Sophie Trawalter of the University of Virginia, that looked at how easy it was to instill and/or eradicate negative racial associations.  Axt and Trawalter write:


White Americans, on average, associate Black people with negativity (Nosek, Banaji, & Greenwald, 2002), and have an easy time learning that Black people are associated with negative information.  Not surprisingly then, they have an easier time associating negative experiences (e.g., an electric shock) with Black vs. White faces (Olsson, Ebert, Banaji, & Phelps, 2005).  For example, in one study, participants received a mild electric shock while viewing either Black or White target faces.  Subsequently, they viewed Black and White target faces without receiving the electric shocks.  All the while, researchers measured participants' skin conductance responses as a proxy for fear, and found that White participants who had been shocked while viewing Black vs. White target faces then had an easier time learning to fear the Black vs. White target faces, and also had a harder time unlearning this association between Black faces and negative outcomes.  This pattern of results is consistent with the notion that Whites have an easy time associating Blacks with negative information.

Once acquired, though, these negative associations are rather resistant to strengthening, and a protocol intended to instill positive associations with people of other races strengthened far more easily, a result that is at least a little cheering:

So it's encouraging that these biases can be modified in a positive direction.  But the second study suggests that such subconscious prejudice may not be as eradicated as we might wish.

The paper called "Welcome to the U.S., But Change Your Name," by Xian Zhao and Monica Biernat, explored the reaction of professors -- who as a group, you'd think, would be more cognizant of the dangers of racial bias -- to receiving inquiry emails from someone with a Chinese name versus ones from someone with an Anglo name, and also of undergraduates presented with a lecture using the same distinction.  The researchers found a disquieting pattern:


In Study 1, an email from a Chinese student requesting a meeting about graduate training was sent to 419 White professors with the name of the sender being varied (Xian versus Alex).  Use of the Chinese name led to fewer responses and agreements to meet than using the Anglo name.  In Study 2, a lecture recording from an international graduate student was presented to 185 White undergraduates with the name of the lecturer varied (Jian versus John). The preference for Anglo names over Chinese names was apparent among those high in assimilationist and low  in multicultural ideologies.

It'd be nice to think that in the 21st century, we're beyond dealing with racism, but the neurological underpinnings are still there.  The attitudes are not that easy to eradicate even in the best of times, and with the current upsurge in xenophobia, suspicion, and stereotyping we need to be even more on guard for letting these flawed perceptions influence our behavior.

In short, it's not enough to say "I'm not a racist" and be done with it.  The specter of like-prefers-like bias is too deeply ingrained in us to dismiss so quickly.  And it's easy enough to criticize those tendencies in others; it's as important -- possibly more important -- to be on guard for the same biases in our own perceptions of our fellow humans.
Posted by Gordon Bonnet at 2:11 AM