Following hard on the heels of yesterday's post, which was about the weird, counterfactual things people believe, we have a study in the journal Motivation and Emotion looking at the psychology of belief -- in particular, whether there is any correlation between belief in the paranormal and religious belief.

The study, by Clay Routledge, Andrew Abeyta, and Christina Roylance of the University of North Dakota's Department of Psychology, was titled "We Are Not Alone: The Meaning Motive, Religiosity, and Belief in Extraterrestrial Intelligence." The authors write:


We tested the proposals that paranormal beliefs about extraterrestrial intelligence (ETI) are motivated, in part, by the need for meaning and that this existential motive helps explain the inverse relationship between religiosity and ETI beliefs...  [We] found support for a model linking low religiosity to low presence of meaning, high search for meaning, and greater ETI beliefs.  In all, our findings offer a motivational account of why people endorse paranormal beliefs about intelligent alien beings observing and influencing the lives of humans.

Routledge was interviewed by Eric W. Dolan of PsyPost and had some interesting insights into his team's results, which showed that the non-religious actually have a higher likelihood of believing in extraterrestrials:


Research using traditional measures of religiosity such as religious affiliation, church attendance, and even belief in God suggests that the US and the Western world more broadly are becoming less religious, more secular.  However, there are good reasons to doubt that this is entirely true.  Sure, fewer people go to church or think of themselves as religious, but this does not necessarily mean they are any less engaged in religious-like spiritual activities or any less in need of the psychological benefits these activities provide.  For instance, there is reason to believe that certain non-religious magical beliefs such as belief in supernatural energy, agents, and forces are actually increasing as is general interest in the paranormal.  So one possibility is that it is not that people leaving traditional religion are becoming more secular but instead that are switching to other types of religious-like beliefs and interests to pursue spiritual needs.

Which I find particularly interesting, given that my experience with my fellow atheists seems to indicate that most of us ended up where we are because of rejecting non-evidence-based frameworks of belief -- so that would include belief in extraterrestrial visitation, which at present has little in the way of hard data in support.  However, as a student of mine used to say, "the plural of anecdote is not data."  Routledge says:


If atheists reject a belief in God, why would they, or at least some of them, believe that there are intelligent alien beings monitoring the lives of humans (these are the types of paranormal ETI beliefs we measured)?  In this research we looked at the motive to perceive life as meaningful.  We found support for a model in which low religiosity (and atheism) were associated with low perceptions of meaning and a high desire to find meaning (what is called search for meaning), and this desire for meaning in turn predicted ETI belief.  In other words, people who were not getting meaning from religion were vulnerable to deficits in meaning and these deficits inclined them to search for non-traditional sources of meaning.  Why ETI beliefs in particular?  Part of the reason religion gives life meaning is it helps us feel connected to something bigger and more enduring, that we are not here by chance.  ETI beliefs do not typically contain a traditional belief in a creator, but they do suggest that we are not alone in the universe.  And intelligent aliens are often construed as agents watching over us.  A lot of specific ETI beliefs involve being part of a cosmic brotherhood.  And ETI beliefs seem, on the surface, more scientific as they do not typically invoke the supernatural.  This makes them more palatable to atheists.

Which is pretty fascinating, and also explains why I have a poster in my classroom with a picture of a UFO and the caption "I Want To Believe."  While I certainly think that the evidence thus far brought to light about the possibility of aliens visiting the Earth is below the standard I'm willing to accept, I have to admit that the thought that aliens are not only intelligent, they're here -- well, it's tremendously exciting.  I would love nothing more to have unequivocal proof of extraterrestrial intelligence, up to and including having a giant UFO land in my back yard.

Of course, if they act like most of the aliens in movies, the next thing they'd do is start vaporizing my pets, and I wouldn't be so thrilled about that.  But on balance, it would still be up there amongst the peak experiences of my life. 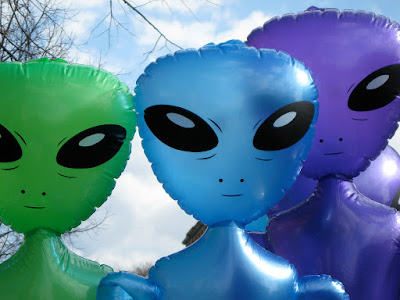 Routledge recognizes the existence of people like myself, and in fact draws an interesting distinction:


Some hardcore skeptics might point out that they do not believe in any of this stuff, that they are completely guided by reason and empirical data.  It is true that being a hardcore skeptic tends to make one an atheist.  However, this does not mean being an atheist makes one a hardcore skeptic... There are atheists who reject belief in God but, as I documented in my work, still hold other paranormal and supernatural beliefs...   In other words, even atheists are a diverse group.

Which stands to reason.  One of the most common errors in thought is the package-deal fallacy --  assuming that groups are homogeneous, and that the beliefs or characteristics of one member is indicative of the beliefs and characteristics of everyone else in the group.  It's to be expected that we atheists have just as many approaches and nuances to our unbelief as religious folks have to their belief.

Myself, I find this reassuring.  I wouldn't want everyone to think alike, even if it meant that they by some fluke all ended up agreeing with me.  As I've pointed out many times before, a willingness to consider the flaws in our own understanding is absolutely essential to a rational and accurate view of the universe.  That goes double for those of us who already are under the impression that we're the pinnacles of logic and reason -- there's nothing like a bit of conceit to blind us to our own misapprehensions.
Posted by Gordon Bonnet at 2:07 AM