Yesterday I was asked by one of my Critical Thinking Students if I'd ever heard of Florida Swamp Apes.  After a brief moment in which I wondered if he were asking about a sports team, I answered in the negative.  He brought out his cellphone, on which he had downloaded an admittedly creepy image, which I include below: 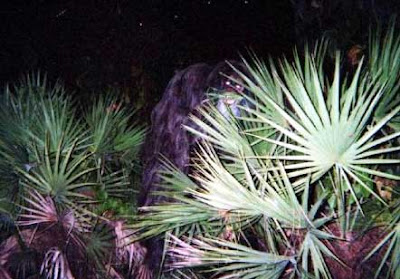 Imagine my surprise when I found out that there's a whole site devoted to this odd beast, also called the "Florida Skunk Ape" for its strong smell.  Considered to be the "southernmost Bigfoot species in the United States," the Florida Skunk Ape has been sighted all over southern Florida, but most commonly in the Everglades region.

As with most of these alleged animals, the claims of sightings are numerous and varied, and the hard evidence essentially non-existent.  There are a lot of photographs, but to borrow a line from the astronomer Neil DeGrasse Tyson, there probably is an "Add Bigfoot" button on PhotoShop, so we shouldn't consider the photographic evidence to be evidence at all.  Also on the website is an audio clip of a Skunk Ape's howls, which to my ear sounded more like a distant dog, or possibly a guy going "Awoo."  We also have an interview with Dave Shealy, who seems to be one of the people responsible for the whole Skunk Ape phenomenon (he is the director of the Skunk Ape Research Center of Ochopee, Florida, open 7 AM to 7 PM, admission $5, which I am definitely going to visit next time I'm in Florida).  Lastly, we are informed that Skulls Unlimited, a company which sells a virtually unlimited number of skulls (thus the name), is now offering resin models of Bigfoot skulls.   One has to wonder what they cast the mold from, but in the field of cryptozoology it is sometimes best not to ask too many questions.

I thought I had heard of most of the cryptozoological claims from the United States, but this one was new to me.  Of course, the Sasquatch of the Pacific Northwest is so familiar by now as to elicit yawns, and many of us know of the Boggy Creek Monster of Fouke, Arkansas, which generated not one, nor two, but five truly dreadful movies.  There's Mothman and the Flatwoods Monster in West Virginia, the Dover Demon of Massachusetts, the Enfield Monster of Illinois, Goatman of Maryland, and dozens of others.  But the Skunk Ape is one I'd never heard of before, and I'm finding myself wondering how I missed it.  It did cross my mind briefly that perhaps the Skunk Ape sightings were merely elderly Bigfoots from the north who had moved to Florida when they retired, but apparently this is incorrect, as one site talks about a sighting of a "young and vigorous animal, probably an adolescent" and another refers to "Skunk Ape mating season"  (May, if you're curious; but you might want to refrain from wandering around the swamps of Florida in May, because two female European tourists tell the story of being chased by a "huge male Skunk Ape with an erection."  They got away, fortunately.)

"Not everyone who sees a Skunk Ape reports it," Dave Shealy says.  "They don't want people to poke fun at 'em, or to tell 'em they're crazy. That's not the exception; that's pretty much the rule...  There's never been a documented case of anyone ever being physically attacked by a Skunk Ape.  But also, there's a lot of people that go into the Everglades that never come out."

Which really isn't all that reassuring.

In any case, the Florida Skunk Ape gives us yet another line in the ledger of Extraordinary Claims Requiring Extraordinary Evidence Of Which There Seems To Be None.  It's just as well, because it's the last week of April, so Skunk Ape mating season is almost upon us, and if there really was evidence that this thing exists I would feel duty-bound to go investigate, and the last thing I want is to be chased around in some godforsaken swamp by a Bigfoot with a boner.  So I think I'll give this one a pass.
Posted by Gordon Bonnet at 3:25 AM