Some days I really feel sorry for my Christian friends, who are (one and all), logical, thoughtful, and intelligent.

The reason I say this is that so many of the most visible spokespeople for Christianity appear to be, to put not too fine a point on it, complete loons, and that gives the impression that all Christians think that way.  It's as if you were trying to get a good handle on the stability, temperament, and brainpower of actors, and you were only allowed to look at Tom Cruise, Charlie Sheen, and Kim Kardashian.

This comes up because of a trio of stories, of increasing wackiness, that I ran into just in the last two days.

Let's start with the outcry by the Church of England and British Prime Minister Theresa May over the fact that a nationwide chocolate egg hunt, sponsored by Cadbury's, has been named the "Great British Egg Hunt" instead of last year's title, the "Easter Egg Trail."

"This marketing campaign … highlights the folly in airbrushing faith from Easter," said an official statement from the Church of England.  May concurred.  "I think what the National Trust is doing is frankly just ridiculous," May said in an interview with ITV News.  "Easter’s very important.  It’s important to me, it’s a very important festival for the Christian faith for millions across the world."

Because Theresa May has nothing more pressing to worry about at the moment, apparently. 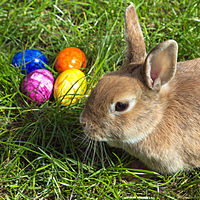 Okay, can we get one thing straight right from the get-go, here?  Neither the Easter egg nor the Easter Bunny is mentioned anywhere in the bible.  While the use of the egg as a symbol of rebirth (and thus resurrection) has been part of Christian practice for centuries, it almost certainly is originally of pagan origin.  German folklorist Jacob Grimm writes:

But if we admit, goddesses, then, in addition to Nerthus, Ostara has the strongest claim to consideration...  The heathen Easter had much in common with May-feast and the reception of spring, particularly in matter of bonfires.  Then, through long ages there seem to have lingered among the people Easter-games so-called, which the church itself had to tolerate: I allude especially to the custom of Easter eggs, and to the Easter tale which preachers told from the pulpit for the people's amusement, connecting it with Christian reminiscences.

So what we have here is some hypersensitive types overreacting to an attempt to make a national event more inclusive, sort of like the coffee drinkers who got their knickers in a twist last December when Starbucks elected not to write "Jesus Jesus Jesus" all over their holiday-season paper cups.

And they call the liberals sensitive snowflakes.

Then we had conservative activists Don and Mary Colbert on the Jim Bakker Show, and they were asked about their support of Donald Trump.  Mary Colbert responded with a dire warning for all of us who dislike the Donald:


It’s not that Donald Trump is all that perfect of a guy.  We all know he’s not.  And we know that he’s not necessarily perfect in every way that we would like.  That’s not how God works.  He works through the ones he chooses.  We don’t choose them.

All we have to do is recognize them and when you recognize a chosen one and you have the discernment to know that they’ve been chosen and know that that’s the will of God, then your life will be blessed.  And if you come against the chosen one of God, you are bringing upon you and your children and your children’s children curses like you have never seen.  It puts a holy fear in me.

"Donald Trump is not all that perfect?"  We have a narcissistic, egomaniacal sociopath in the Oval Office, who appears to be very nearly amoral, who lies every damn time he opens his mouth, and who is a serial adulterer and likely sexual predator to boot, and you call that "not all that perfect?"  That's like saying that Joseph Stalin was "a bit of a control freak on occasion."


And last, if we don't support Trump, we are bringing curses on our "children and children's children?"  Look, lady, the closest I have to grandchildren at the moment is that one of my sons owns a pair of ferrets.  You're telling me that my prospective grandchildren, and probably my grandferrets as well, are cursed because I dislike Donald Trump?

Oh, and if that wasn't enough, Bakker himself said that by "blaspheming against Donald Trump," we're hastening the End Times.  Which, honestly, I can't say is a particular deterrent for me at the moment.  Considering the news lately, the Dragon With Seven Heads and Ten Crowns, the Scarlet Whore of Babylon, and the Four Apocalyptic Horsepersons sound like a distinct improvement.

Last, no post about religious nutjobs would be complete without a contribution from Pat Robertson, who went on record this week as saying that he's tired of being "dominated by homosexuals."  After laughing for about ten minutes at the mental image this evoked, I went on to read Robertson's explanation of what he meant:

We have given the ground to a small minority.  You figure, lesbians, one percent of the population; homosexuals, two percent of the population.  That’s all.  That’s statistically all.  But they have dominated — dominated the media, they’ve dominated the cultural shift and they have infiltrated the major universities.  It’s just unbelievable what’s being done.  A tiny, tiny minority makes a huge difference.  The majority — it’s time it wakes up.

In other words, the right to dominate every fucking sphere of influence in the entire country?

No, what Robertson and his ilk object to is that LGBT individuals are now demanding to be recognized as having rights, including the right to be free from discrimination.  That, apparently, is "domination" in Robertson's mind.

So anyway.  After that last one, I need to go have a cup of coffee and calm down for a while.

I must say, however, that I'm heartened by the fact that there are Christians who speak up about all of this nonsense.  I just wish they were louder, sometimes.  Or at least louder than people like Mary Colbert, Jim Bakker, and Pat Robertson.  But unfortunately, at the moment the loons are the ones who are getting all the press -- and they're the ones who will continue to be in the limelight until their followers say, "Okay, enough.  You're talking bullshit, and you need to shut up."
Posted by Gordon Bonnet at 2:11 AM