Is it just me, or do the members of the Trump administration have a really poor sense of timing?

At a gathering to launch Black History Month, Trump caused some serious head-scratching with his comment that Frederick Douglass "is doing an amazing job," which is doubly impressive given that Douglass died 122 years ago.  He declared April "Sexual Assault Awareness Month," and on April 4 said that conservative pundit Bill O'Reilly "should not have settled" five cases in which he was accused of sexual harassment or inappropriate behavior.  (In fact, he said, "I don't think Bill did anything wrong" -- which, considering that he's said that you have to "treat women like shit" and that it's okay to "grab them by the pussy," might not be the most weighty endorsement O'Reilly could have hoped for.)

Then, the White House released an official statement on Holocaust Remembrance Day -- and never once mentioned the Jews.  This was followed up by Sean Spicer's bizarre comment two days ago that "even Hitler didn't sink to the level of using chemical weapons," ignoring the fact that chemical weapons were used to gas six million Jews.

Which statement he made in the middle of Passover. 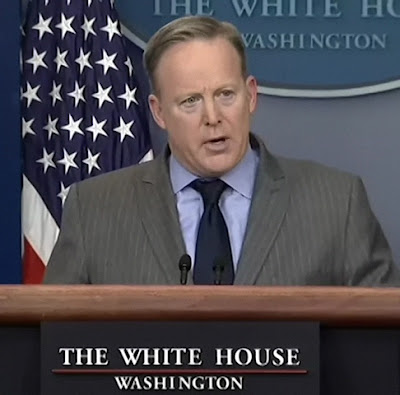 Look, this goes way beyond tone-deafness.  This is beginning to look like a deliberate campaign to minimize the suffering of anyone who doesn't directly contribute to the Republican party.  These aren't "gaffes;" a "gaffe" is John Kerry describing his nuanced approach to support for the Iraq War as "I actually did vote for the $87 billion before I voted against it."  Okay, that was stupid and inarticulate, and he was the recipient of well-deserved ridicule for saying it.

But this?  This goes way beyond stupid and inarticulate.  In fact, even "insensitive and insulting" don't begin to cover it.

Fortunately -- if there is a "fortunately" in this situation -- the backlash against the latest crazy comment was immediate and blistering.  Here is a sampling of responses to Spicer's Hitler comment from Twitter:


This doesn't really answer the question about why doing it from a plane is worse than building gas chambers in death camps, of course.

A list of things that come to mind when you think of Hitler: (1) mustache; (2) gassed people.

Being Press Secretary for Donald Trump is hard.  But it's not as hard as he makes it look.

Then, there's my favorite one:

The most trenchant comment of all, however, was from Spencer Ackerman, blogger, writer, and editor of The Guardian.  Ackerman wrote: "Hitler was not 'using the gas on his own people,' says Sean Spicer, writing German Jews out of history."

Which appears to be what this is about -- marginalizing people who don't fit in with the Trumpian version of Volksgemeinschaft, or worse, pretending that they simply don't exist.  You make a statement like that once, you can pass it off as shooting from the hip, bobbling an opportunity to make an inclusive, insightful statement, having a brain fart.  Maybe even twice.

But four times?  This is beginning to look deliberate.

I don't mean to sound like a conspiracy theorist, here.  But this administration is establishing an appalling pattern of cultural and racial insensitivity.  If you needed further evidence, Trump himself went on record as saying, regarding the threats against Jewish schools, Nazi graffiti defacing Jewish community centers, and desecration of Jewish graveyards -- all of which have increased drastically since Trump's win last November -- that it might be the Jews themselves perpetrating the attacks.  It's not always anti-Semites doing these things, Trump said.  "Sometimes it’s the reverse, to make people — or to make others — look bad."

So tell me again how all of the other things that have come out of the mouths of Trump and his spokespeople have been simple "gaffes."

I've been trying to hold my outrage in abeyance.  I understand that it's hard to think on your feet every time you're on the spot.  People in the public eye are scrutinized, they inevitably make mistakes, and their missteps are played and replayed and analyzed and reanalyzed.  But if this administration wants to regain its credibility, it needs to give more than lip service to stopping this kind of shit.  We need more than Trump's statement that "Number one, I am the least anti-Semitic person you've ever seen in your entire life.  Number two, the least racist."  These last few months have left me feeling a little dubious on that point.  I think a fitting place to end is with a quote from Rabbi Jonah Dov Pesner, director of the Religious Action Center of Reform Judaism, who said: "President Trump has been inexcusably silent as this trend of anti-Semitism has continued and arguably accelerated.  The president of the United States must always be a voice against hate and for the values of religious freedom and inclusion that are the nation’s highest ideals."
Posted by Gordon Bonnet at 2:10 AM