If the spirit is willing

Turns out, you have to be careful what you label "non-fiction."

Warner Brothers Studios is currently embroiled in a lawsuit that falls under what lawyers technically call "being between a rock and a hard place."  It all started when they released their horror film The Conjuring in 2013, which is all about fun and entertaining things like demons and curses and exorcisms and parents attempting to kill their children.  The Conjuring was based on the book The Demonologist, by Gerald Brittle, which told the story of two demon hunters named Ed and Lorraine Warren, who go from town to town rousting out evil spirits, which is apparently lucrative work these days.

Brittle had an exclusive contract to tell the Warrens' story, and when he found out that Warner Brothers had made a movie based on it, he told them they'd violated that agreement and (in essence) made a movie based on his book without permission or compensation.  Warner Brothers fired back that Brittle's book is labeled "non-fiction" -- meaning that he was claiming the events were true, and therefore part of the "historical record."  As such, they're open for anyone to exploit, and such accounts would come under fair use law.

This is where it gets interesting.  Brittle's attorney, Patrick C. Henry, says that Brittle now knows that the Warrens' account is "a pack of lies."  Further, Henry says that it was impossible for Warner Brothers to make the movie they did without basing it almost entirely on Brittle's book.  "It is very hard to believe that a large conglomerate such as Warner Brothers, with their army of lawyers and who specializes in intellectual property rights deals, would not have found The Demonologist book or the deals related to it, or Brittle for that matter," Henry says.  "The only logical conclusion is that the studio knew about the Warren's agreement with Brittle but just assumed they would never get caught."

So Henry filed a lawsuit on Brittle's behalf, to the tune of $900 million.  To Warner Brothers' defense that you can't invoke intellectual property rights law over events that actually occurred, Henry had an interesting response.

If Warner Brothers is claiming that The Demonologist (and therefore the events in The Conjuring) are real, then Brittle will drop the lawsuit -- if Warner Brothers can offer up concrete proof of ghosts. 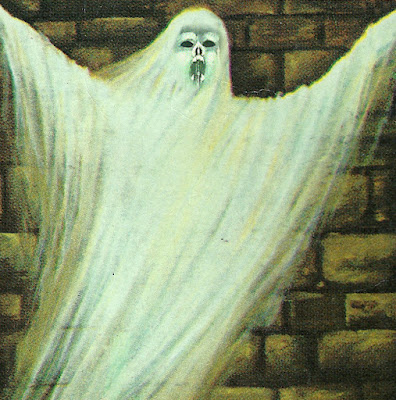 This puts the film giant in a rather awkward position.  If they can prove ghosts are real, then the claim that story in The Conjuring is non-fiction has at least some merit.  If they can't, it's fiction, and the studio is guilty of ripping off Brittle's work as the basis of their movie.

Sort of reminds me of the old method of determining whether someone is a witch.  They tie the accused hand and foot, and throw them in a pond.  If they drown, they're innocent.  If they survive, Satan was protecting them, and they're a witch, so you burn them at the stake.

Of course, the difference here is that Brittle is just one guy, and Warner Brothers is a multi-million dollar corporation that can afford huge legal expenses without any particular problem.  Although Brittle's defense is clever, I'd be willing to put money that the lawsuit is going to get settled out of court -- whether or not Warner Brothers can produce a ghost.

On the other hand, maybe they will find a spirit that's willing.  Then not only will Brittle have no choice but to drop his lawsuit, Warner Brothers will be in good shape to win the James Randi Million Dollar Challenge.  So stay tuned.
Posted by Gordon Bonnet at 3:11 AM