I've got your number

An inevitable side-effect of writing six times a week here at Skeptophilia is that I get some weird gifts sometimes.

This explains why I am the proud owner of:
The latest addition to my collection comes to me from someone who is not only a loyal reader of Skeptophilia but is one of my best buds -- writer and blogger Andrew Butters (who writes over at Potato Chip Math, an awesome blog you should all check out on a regular basis).  Recently I got a package from Andrew, and when I opened it up, it turned out to be a book called...

... Mysteries and Secrets of Numerology.

This book, by Lionel and Patricia Fanthorpe, is a complete analysis of the practice of numerology across the world, as viewed through the critical lens of believing every bit of it without question.  I checked out how it has fared on Amazon, and found that it has thus far received two reviews:

1: This book is full of wonderful information regarding numerology.  I got a copy from the library, but I will be buying my own to keep as a reference for numerology and sacred geometry.  Well Done!

2: Fine. This purchase was for some research I was doing and I came away amazed that anyone can take this entire subject matter area seriously.  The book drones on forever and that makes it great bedtime reading.

Yes, I did work the examples on my own set of numbers as well as those other family members and it didn't help me understand them any better than I did before.  They're still boring.  I put this book in the same category as those purporting to provide proof of alien abductions happening every day, all over planet earth.  If you really must find something in which to believe to give your life purpose, or help you amaze your friends, this book is for you.

So it's gotten a fairly mixed reception so far.

Undeterred by the second review, I read through it.  I will admit that I skimmed past the parts of it where the authors calculate numerological values for everyone from Hippocrates to Alexander Graham Bell.  (I did note that the authors concluded that the "dark side of his numerological 1" for the famous British murderer Hawley Crippen "may have been what drove him to the rash and impetuous murder" of his second wife, Cora.  Which seems like a stretch, as from pure statistics one out of every nine people on Earth are "numerological 1s," and as far as I can tell, very few of them murder their second wives.) 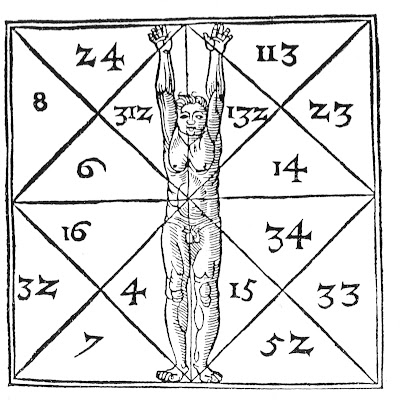 The last section was the most interesting, however.  We're told therein that because all sorts of factors can contribute to a person acting a particular way, or an action having a particular outcome, there's no reason not to believe that "numbers can exert invisible and unsuspected influences just as powerful."  We're then instructed that we should all pay more attention to the numbers in our lives, and especially look for the good influences of the numbers 1 (which, I note, didn't help Crippen much), 3, 6, 7, and 9.  Only in the second-to-last paragraph do the Fanthorpes bring up the central problem with the whole thing: "These attempts to use numbers as influences to attract good things and to protect against negative things are very interesting, but are open to the question of whether -- when they seem to work -- they are actually self-fulfilling prophecies."

So I'm sure you're all dying to know what my number is.  The book gives detailed instructions on how to calculate your number, although it does say there are different ways of doing so.  "Therefore," the authors write, "two equally well-qualified and experienced numerologists working with slightly different systems could reach very different conclusions."  (Which to me, is just a fancy way of saying, "this is bullshit.")

I used what they say the "simplest way" is -- writing out the English alphabet underneath the numbers 1-9, starting with A=1, B=2, and so on; after you reach I=9, you start over with J=1.  Following this protocol, my whole name adds up to 76.  You're then supposed to add the digits (giving 13) and then add those (giving a final answer of 4).

So my number apparently is 4, which unfortunately is not one of the "auspicious numbers" mentioned above.  Four, apparently, means "a foundation, the implementation of order, a struggle against limits, and steady growth."

I suppose it could be worse.

In any case, I'm not going to lose any sleep over the fact that I didn't get "9" (the number of "immense creativity").  Nor am I going to do what the authors say some folks have done, which is change their name to one that has a better number.

It might be worth getting a second opinion, however.  Maybe I should see what the "steampunk Tarot cards" have to say on the matter.  That should be illuminating.
Posted by Gordon Bonnet at 2:11 AM