For those of you who are, like me, evil, sinful unbelievers who are doomed to the fiery furnace for all eternity, I have some good news:

A Michigan pastor has created a checklist of all the things we should do when we miss the Rapture. 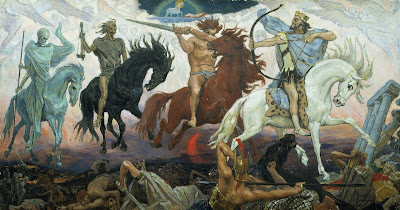 Personally, I think this is pretty considerate of him.  After all, he's going to be long gone, floating up to heaven to sit forever in the Fields of Lilies, which sounds to me like a good way to have a serious attack of pollen allergy.  Be that as it may, Pastor Dave Williams, of Mount Hope Church in Lansing, Michigan, has provided us non-lily-sitters with some guidelines of what we should do when all of the holy people evaporate.

So, with no further ado:


1. Do not believe the explanations given by the secular media.

Well, most of the people of Pastor Williams's stripe already don't, so this one is a bit of a no-brainer.  The idea, apparently, is not to buy it when the mainstream media says the vanished folks have been "beamed to some interplanetary spaceship to be reprogrammed."  Which doesn't sound like something the mainstream media would claim, although in an extreme case like the Rapture, it's hard to know what they'd say.

2. Get rid of your cell phone.

I guess the government left behind is going to be made up of Not Nice People, and they might use your cell phone to track you.  Why they'd be after you, since you're one of the evil people who didn't get Raptured, I don't know.

Which is good advice under most circumstances.


4. Repent immediately and make your peace with God.

I guess the message here is that it's not too late to reserve yourself a place amongst the lilies, even if you didn't get Raptured.  I have a hard time imagining myself changing my mind to the extent that I'll make up for all of my years of godlessness, but you never know what someone might do in extremis.  Guess I'll have to wait and see on that one.


5. Make sure you have a printed Bible.

Got that one covered.  Actually I have several -- different translations, mostly.  One of them is a bible given to me by my grandmother at my confirmation into the Catholic church, which I remember mostly because of the horrifying illustrations of the Maccabees getting various body parts lopped off.  The pictures were supposed to be edifying -- I think the message is, "Look how holy these people were, hanging on to their religion even when they were being gruesomely tortured" -- but the message I got from it was, "If anyone ever threatened to cut my hands off and rip my tongue out, I'd drop my religion like a hot potato."  Hell, I figure if under #4 above I can still make up for it, I'll be okay regardless.


6. Leave your home and get away from the cities, especially big cities.

A non-issue for me, since I live so far out in the sticks my nearest neighbors are cows.  I guess this makes sense, though, as based on Stephen King's The Stand, wherein a few survivors of the Superflu got stuck in Manhattan, and ended up having to walk in the dark through the Lincoln Tunnel which at the time was clogged with wrecked cars and decomposing bodies, a scene that still haunts my nightmares.


7. Pray to God to help you and give you strength.

The idea apparently is that any church you go to post-Rapture has some problems, given that they didn't get Raptured themselves.  Again, this one isn't a problem in my case.  If a bunch of the people on Earth suddenly vanished, I highly doubt the first thing I'd do is turn to my wife and say, "Hey, I know.  Let's take in a mass."

That way you can keep abreast of further fun developments, such as the appearance of the Beast and the Rivers Running Red With The Blood Of Unbelievers.  Although you'd think you wouldn't need a radio to tell you all that.  It doesn't sound like something that would escape notice, frankly.


10. Keep praying for your loved ones who are unbelievers.

"Your prayers may be the key to seen your loved ones after this period of supreme agony is over," Pastor Williams tells us.  Which sounds good, at least the "seeing your loved ones" part, even though I'm not looking forward to the "supreme agony" part so much.


11. Leave copies of this list for as many people as you can.

At least by this post I am doing my part in that regard.

So there you have it.  A handy checklist for all of us damned folks to follow.  Me, I'm not losing any sleep over it, because people like Pastor Williams have been predicting the Rapture for decades, and here we all still are.  Also, I figure that since the evangelicals have gone all gaga over Donald Trump, maybe the Antichrist will be more my type in any case.
Posted by Gordon Bonnet at 2:04 AM