I read an article on CNN yesterday that really pissed me off, something that seems to be happening more and more lately.

The article, entitled "Denying Climate Change As the Seas Around Them Rise" (by Ed Lavandera and Jason Morris), describes the effects of climate change in my home state of Louisiana, which include the loss of entire communities to rising seas and coastline erosion.  An example is the village of Isle Jean Charles, mostly inhabited by members of the Biloxi-Chetimacha tribe, which basically has ceased to exist in the last ten years.

But there are people who will deny what is right in front of their faces, and they include one Leo Dotson of Cameron Parish.  Dotson, a fisherman and owner of a seafood company, "turned red in the face" when the reporters from CNN asked him about climate change.  Dotson said:


I work outside in the weather on a boat, and it's all pretty much been the same for me.  The climate is exactly the same as when I was a kid.  Summers hot, winters cold...  [Climate change] doesn't concern me...  What is science?  Science is an educated guess.  What if they guess wrong?  There's just as much chance for them to be wrong as there is for them to be right.  If [a scientist] was 500 years old, and he told me it's changed, I would probably believe him.  But in my lifetime, I didn't see any change.

Well, you know what, Mr. Dotson?  I'm kind of red in the face right now, myself.  Because your statements go way past ignorance.  Ignorance can be forgiven, and it can be cured.  What you've said falls into the category of what my dad -- also a fisherman, and also a native and life-long resident of Louisiana -- called "just plain stupid."

Science is not an educated guess, and there is not  "just as much chance for them to be wrong as there is for them to be right."  Climate scientists are not "guessing" on climate change.  Because of the controversy, the claim has been tested every which way from Sunday, and every scrap of evidence we have -- sea level rise, Arctic and Antarctic ice melt, earlier migration times for birds, earlier flowering times for plants, more extreme weather events including droughts, heat waves, and storms -- support the conclusion that the climate is shifting dramatically, and that we've only seen the beginning. 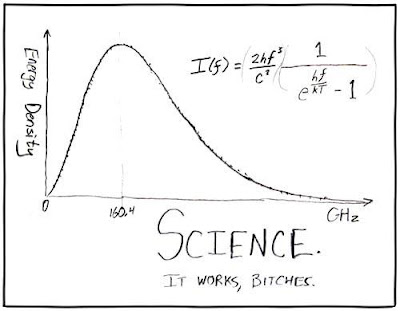 At this point, the more educated science deniers usually bring up the fact that there have been times that the scientific establishment has gotten it wrong, only to be proven so, sometimes years later.  Here are a few examples:
There.  Have I forgotten any major ones?  My point is that yes, prior to each of these, people (including scientists) believed some silly and/or wrong ideas about how the world works, and that there was considerable resistance in the scientific community to accepting what we now consider theory so solidly supported that it might as well be considered as fact.  But you know why these stand out?

Because they're so infrequent.  If you count the start of the scientific view of the world as being some time during the Enlightenment -- say, 1750 or so -- that's 267 years in which there have been only seven times there has been a major model of the universe overturned and replaced by a new paradigm.  Mostly what science has done is to amass evidence supporting the theories we have -- genetics supporting evolution, the elucidation of DNA's structure by Franklin, Crick, and Watson supporting Mendel, the discovery of the 3K cosmic microwave background radiation by Amo Penzias and Robert Wilson supporting the Big Bang.

So don't blather at me about how "science gets it wrong as often as it gets it right."  That's bullshit.  If you honestly believe that, you better give up modern medicine and diagnostics, airplanes, the internal combustion engine, microwaves, the electricity production system, and the industrial processes that create damn near every product we use.

But you know what?  I don't think Dotson and other climate change deniers actually do believe that.  I doubt seriously whether Dotson would go in to his doctor for an x-ray, and when he gets the results say, "Oh, well.  It's equally likely that I have a broken arm or not, so what the hell?  Might as well not get a cast."  He doesn't honestly think that when he pulls the cord to start his boat motor, it's equally likely to start, not start, or explode.

No, he doesn't believe in climate change because it would require him to do something he doesn't want to do.  Maybe move.  Maybe change his job.  Maybe vote for someone other than the clods who currently are in charge of damn near every branch of government.  So because the result is unpleasant, it's easier for him to say, "ain't happening," and turn red in the face.

But the universe is under no obligation to conform to our desires.  Hell, if it was, I'd have a magic wand and a hoverboard.  It's just that I'm smart enough and mature enough to accept what's happening even if I don't like it, and people like Dotson -- and Lamar Smith, and Dana Rohrabacher, and James "Snowball" Inhofe, and Scott Pruitt, and Donald Trump -- apparently are not.

The problem is, there's not much we can do to fix this other than wait till Leo Dotson's house floats away.  Once people like him have convinced themselves of something, there's no changing it.

I just have to hope that our government officials aren't quite so intransigent.  It'd be nice to see them wake up to reality before the damage done to our planet is irrevocable.
Posted by Gordon Bonnet at 2:03 AM