Run for your life

Back when I was in my thirties, I got into running in a big way.

I used to do four to five miles a day, pretty much no matter what the weather, all the more impressive because I live in upstate New York, where warm weather is in woefully short supply (this year, summer is scheduled for the second Thursday in July).  But unless we were knee-deep in snow, I was out there.

Then, in my forties, I began to develop some joint problems, which were (and still are) of unknown origin, and those only resolved a couple of years ago.  So I'm back at it, and in fact have my first semi-comptetitive 5K of 2017 three weeks from now.

What's funny is that while I'm running, mostly what I'm thinking about is, "merciful heavens, why do I do this to myself?"  My quads and calves ache, I'm breathing hard, all I want is to see that blessed sight of the Finish Line.  But afterwards... all I can say is that the feeling is euphoric.  Despite being tired and sweaty and having spaghetti legs, my general feeling is "Woo hoo!  Gotta do that again soon!"

So what's going on here?  Am I some kind of masochist who gets his jollies out of being miserable?  Or am I like the guy who pounds his head on the wall because it feels so good when he stops?

If so, I'm not alone -- and neuroscientists have just taken the first steps toward figuring out why. 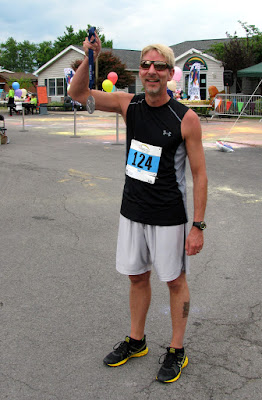 Me with a medal and some serious post-race euphoria

Apparently, part of what's going on is that vigorous aerobic exercise stimulates the growth of neurons in the brain.  It was long the conventional wisdom that humans couldn't do that; you had a certain number of neurons at adulthood, and afterwards the number would only go one way.  You could only affect the rate at which the neurons declined, based on such things as alcohol and drug use, concussions, and the number of times you listen to Ken Ham trying to defend why Noah's Ark is actually real science.

But according to Karen Postal, president of the American Academy of Clinical Neuropsychology, that may not be true -- and one thing that affects not only preserving the gray matter you have, but increasing it, is exercise.  "If you are exercising so that you sweat — about 30 to 40 minutes — new brain cells are being born," said Postal, who is a runner herself.  "And it just happens to be in that memory area...  That's it.  That's the only trigger that we know about."

Other researchers have gone one step further than that.  Emily E. Bernstein and Richard J. McNally of Harvard University recently published a study called "Acute Aerobic Exercise Helps Overcome Emotion Regulation Deficits," which shows that our ability to modulate our negative emotions -- especially grief, helplessness, and anxiety -- can be improved dramatically by the simply expedient of going for a half-hour's run.  The authors write:


Although colloquial wisdom and some studies suggest an association between regular aerobic exercise and emotional well-being, the nature of this link remains poorly understood.  We hypothesised that aerobic exercise may change the way people respond to their emotions.  Specifically, we tested whether individuals experiencing difficulties with emotion regulation would benefit from a previous session of exercise and show swifter recovery than their counterparts who did not exercise.  Participants completed measures of emotion response tendencies, mood, and anxiety, and were randomly assigned to either stretch or jog for 30 minutes.  All participants then underwent the same negative and positive mood inductions, and reported their emotional responses... Interactions revealed that aerobic exercise attenuated [negative] effects.  Moderate aerobic exercise may help attenuate negative emotions for participants initially experiencing regulatory difficulties.

This is no surprise to me, nor, I suspect, to anyone else who runs.  The process creates space in your mind, space that can then act as a springboard to creativity.  It's like one of my favorite authors, Haruki Murakami, says in his paean to the sport, What I Talk About When I Talk About Running: "I just run.  I run in void.  Or maybe I should put it the other way: I run in order to acquire a void."

Or as Melissa Dahl said in her piece in The Science of Us called "Why Running Helps to Clear Your Mind," "[T]here’s another big mental benefit to gain from running, one that scientists haven’t quiet yet managed to pin down to poke at and study: the wonderful way your mind drifts here and there as the miles go by.  Mindfulness, or being here now, is a wonderful thing, and there is a seemingly ever-growing stack of scientific evidence showing the good it can bring to your life.  And yet mindlessness — daydreaming, or getting lost in your own weird thoughts — is important, too."

Which is it exactly.  And with that, I think I'll wind up here.  Maybe go for a run.  And after that, who knows what I'll do with all those extra neurons?
Posted by Gordon Bonnet at 2:04 AM