When I was in eleventh grade, I took a semester-long class called Introduction to Psychology.  The teacher was Dr. Loren Farmer -- I never found out if he actually had a Ph.D., or if people simple called him "Dr." Farmer because of the air of erudition he had.

The class was taught in an unorthodox fashion, to say the least.  Dr. Farmer was pretty counterculture, especially considering that this was Louisiana in the 1970s.  He stood on no ceremony at all; we were allowed to sit wherever we liked (my favorite perch was on a wide bookcase by the window), and class was more of a free-roaming discussion than it was the usual chalk/talk typical of high school back then.  Even his tests were odd; we had a choice on his final exam of ten or so short-answer/essay questions from which we were to answer seven, and I recall that one of them was "Draw and interpret three mandalas."  (I elected not to do this one.  My ability to sling the arcane-sounding bullshit was and is highly developed, but my artistic ability pretty much stalled out in third grade, and I didn't think I could pull that one off.)

Some time around the middle of the semester, he instructed us to go buy a copy of a book that would be assigned reading over the following few weeks.  The book was The Teachings of Don Juan: A Yaqui Way of Knowledge, by Carlos Castaneda.  I had never heard of it, but I dutifully purchased the book. 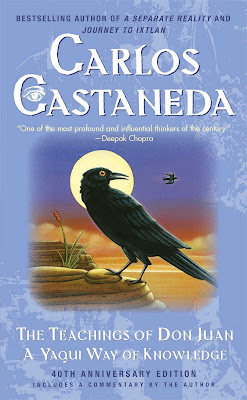 I was nothing short of astonished when it turned out to be about the use of hallucinogenic drugs.  Castaneda tells the story of his apprenticeship to Don Juan Matus, a Yaqui native from Mexico, wherein he was given peyote, Psilocybe mushrooms, and Datura (Jimson weed), inducing wild visions that Don Juan said weren't hallucinations; they were glimpses of an "alternate reality" that sorcerers could use to gain power and knowledge.  Castaneda starts out doubtful, but eventually goes all-in -- and in fact, wrote one sequel after another describing his journey deeper and deeper into the world of the brujo.

I was captivated by Castaneda's story.  I read the sequel to Teachings, A Separate Reality.  The third one, Journey to Ixtlan, was even better.  Then I got to the fourth one, Tales of Power, and I began to go, "Hmmm."  Something about the story seemed off to me, as if he'd gone from recounting his real experiences to simply making shit up.  I made it through book five, The Second Ring of Power, and the feeling intensified.  About two chapters into book six, The Eagle's Gift, I gave the whole thing up as a bad job.

But something about the stories continued to fascinate me.  The best parts -- especially his terrifying vision of a bridge to another world in the fog at night in A Separate Reality, and his witnessing a battle of power in Journey to Ixtlan -- have a mythic quality that is compelling.  But the sense that even apart from any supernatural aspects, which I predictably don't buy, the books were the product of a guy trying to pull a fast one on his readers left me simultaneously angry and disgusted.

I discovered that I'm not alone in that reaction.  Richard de Mille (son of Cecil), an anthropologist and writer, wrote a pair of analyses of Castaneda's books, Castaneda's Journey and The Don Juan Papers, that I just finished reading a few days ago, explaining my resurgence of interest in the subject.  De Mille pounced on something that had been in the back of my mind ever since reading Journey to Ixtlan -- that it would be instructive to compare the timeline of the first three books, as Ixtlan overlaps the years covered by the first two, Teachings and A Separate Reality.

And what de Mille found is that the books are full of subtle internal contradictions that one would never discover without doing what he did, which is to lay out all of the carefully-dated supposed journal entries Castaneda gives us in the first three books.  Among the more glaring errors is that Castaneda is introduced for the first time to a major character, the brujo Don Genaro, twice -- over five years apart.   Also separated by years are events in which Castaneda saw (the word in italics is used by Castaneda to describe a mystical sort of vision in which everything looks different -- humans, for instance, look like bundles of fibers made of light) and in which Don Juan tells his apprentice "you still have never seen."

Worse still is the fact that Ixtlan recounts a dozen or so mind-blowing experiences that allegedly occurred during the same time period as Teachings -- and yet which Castaneda didn't think were important enough to include in his first account.  Add to that the point de Mille makes in The Don Juan Papers that not only do the Yaqui not make use of hallucinogens in their rituals, Don Juan himself never tells Castaneda a single Yaqui name -- not one -- for any plant, animal, place, or thing they see.  Then there's the difficulty pointed out by anthropologist Hans Sebald, of Arizona State University, that Castaneda claims that he and Don Juan went blithely wandering around in the Sonoran desert in midsummer, often with little in the way of food or water, never once making mention any discomfort from temperatures that would have hovered around 110 F at midday.

The conclusion of de Mille and others is that Castaneda made the whole thing up from start to finish, and the books are the combination of scraps of esoteric lore he'd picked up in the library at UCLA and his own imagination.  There was no Don Juan, no Don Genaro, no glow-in-the-dark coyote that spoke to the author at the end of Ixtlan.  Distressing, then, that de Mille's rebuttals -- which were published in 1976 and 1980, respectively -- didn't stop Castaneda from amassing a huge, and devoted, following.  He founded a cult called "Tensegrity" which alleged to teach the acolyte the secrets of how to see Don Juan's alternate reality.  He surrounded himself with a group of women called "the nagual women" (unkinder observers called them the "five witches") who did his bidding -- Florinda Donner-Grau, Taisha Abelar, Patricia Partin,  Amalia Marquez, and Kylie Lundahl -- all of whom vanished shortly after Castaneda died of liver cancer in 1998.  There's been no trace discovered of any of them except for Partin, whose skeleton was discovered in Death Valley in 2006, but it's thought that all five committed suicide after their leader died.

So what began as a hoax ended up as a dangerous cult.  Castaneda seems to have started the story as a way of pulling the wool over the eyes of his advisers in the anthropology department at UCLA (it worked, given that Journey to Ixtlan is essentially identical to his doctoral dissertation), but as so often happens, fame went to his head and he moved from telling tall tales about an alleged Yaqui shaman to using the people who bought into his philosophy as a way to get money, sex, and power.

And it can be imagined how pissed off this makes actual Native Americans.  Castaneda hijacked and mangled their beliefs into something unrecognizable -- placing his books in with Seven Arrows as yet another way that non-Natives have appropriated and misrepresented Native culture.  (If you've not heard about Seven Arrows, by Hyemeyohsts Storm, it's a mystical mishmash containing about 10% actual facts about the Cheyenne, and 90% made-up gobbledygook.  Storm himself -- his actual name is Arthur -- claims to be half Cheyenne and to have grown up on the reservation, but the Cheyenne tribal authorities say they've never heard of him.)

What's saddest about all of this is that Castaneda could have simply written "fiction" after the title of his books, and they'd have lost nothing in impact.  It's not that fiction has nothing to teach us, gives us no inspiration, doesn't consider the profound.  In fact, I would argue that some of the most poignant lessons we learn come from the subtexts of the fiction we read.  (I have tried to weave that into my own writing, especially my novel Sephirot, which is about one man's Hero's Journey placed in the context of Jewish mystical lore.)

But instead Castaneda lied to his readers.  There's no kinder way to put it.  He told us that it was all real.  Not content with writing an excellent work of inspirational fiction, he instead is relegated to the ignominious ranks of clever hoaxers.  (Or at least should be; de Mille says there are still lots of college classes in which Castaneda's books are required reading, and not as an example of an anthropological hoax, but as real field work in ethnology and belief.)

So however entertaining, and even inspiring, his books are, the whole thing leaves me with a bad taste in my mouth.  In short, truth matters.  And the fact is, Carlos Castaneda was nothing more than a sly and charismatic liar.
Posted by Gordon Bonnet at 3:34 AM