Thanks for the memories

I've always been fascinated with memory.  From the "tip of the tongue" phenomenon, to the peculiar (and unexplained phenomenon) of déjà vu, to why some people have odd abilities (or inabilities) to remember certain types of information, to caprices of the brain such as its capacity for recalling a forgotten item once you stop thinking about it -- the way the brain handles storage and retrieval of memories is a curious and complex subject.

Two pieces of recent research have given us a window into how the brain organizes memories, and their connection to emotion.  In the first, a team at Dartmouth and Princeton Universities came up with a protocol to induce test subjects to forget certain things intentionally.  While this may seem like a counterproductive ability -- most of us struggle far harder to recall memories than to forget them deliberately -- consider the applicability of this research to debilitating conditions such as post-traumatic stress disorder.

In the study, test subjects were shown images of outdoor scenes as they studied two successive lists of words.  In one case, the test subjects were told to forget the first list once they received the second; in the other, they were instructed to try to remember both.

"Our hope was the scene images would bias the background, or contextual, thoughts that people had as they studied the words to include scene-related thoughts," said Jeremy Manning, an assistant professor of psychological and brain sciences at Dartmouth, who was lead author of the study.  "We used fMRI to track how much people were thinking of scene-related things at each moment during our experiment.  That allowed us to track, on a moment-by-moment basis, how those scene or context representations faded in and out of people's thoughts over time."

What was most interesting about the results is that in the case where the test subjects were told to forget the first list, the brain apparently purged its memory of the specifics of the outdoor scene images the person had been shown as well.  When subjects were told to recall the words on both lists, they recalled the images on both sets of photographs.

"[M]emory studies are often concerned with how we remember rather than how we forget, and forgetting is typically viewed as a 'failure' in some sense, but sometimes forgetting can be beneficial, too," Manning said.  "For example, we might want to forget a traumatic event, such as soldiers with PTSD.  Or we might want to get old information 'out of our head,' so we can focus on learning new material.  Our study identified one mechanism that supports these processes."

What's even cooler is that because the study was done with subjects connected to an fMRI, the scientists were able to see what contextual forgetting looks like in terms of brain firing patterns.   "It's very difficult to specifically identify the neural representations of contextual information," Manning said.  "If you consider the context you experience something in, we're really referring to the enormously complex, seemingly random thoughts you had during that experience.  Those thoughts are presumably idiosyncratic to you as an individual, and they're also potentially unique to that specific moment.  So, tracking the neural representations of these things is extremely challenging because we only ever have one measurement of a particular context.  Therefore, you can't directly train a computer to recognize what context 'looks like' in the brain because context is a continually moving and evolving target.  In our study, we sidestepped this issue using a novel experimental manipulation -- we biased people to incorporate those scene images into the thoughts they had when they studied new words.  Since those scenes were common across people and over time, we were able to use fMRI to track the associated mental representations from moment to moment."

In the second study, a team at UCLA looked at what happens when a memory is connected to an emotional state -- especially an unpleasant one.  What I find wryly amusing about this study is that the researchers chose as their source of unpleasant emotion the stress one feels in taking a difficult math class.

I chuckled grimly when I read this, because I had the experience of completely running into the wall, vis-à-vis mathematics, when I was in college.  I actually was a pretty good math student.  I breezed through high school math, barely opening a book or spending any time outside of class studying.  In fact, even my first two semesters of calculus in college, if not exactly a breeze, at least made good sense to me and resulted in solid A grades.

I'm not entirely sure what happened, but when I hit three-dimensional representations of graphs, and double and triple integrals, and calculating the volume of the intersection of four different solid objects, my brain just couldn't handle it.  I got a C in Calc 3 largely because the professor didn't want to have to deal with me again.  After that, I sort of never recovered.  I had a good experience with Differential Equations (mostly because of a stupendous teacher), but the rest of my mathematical career was pretty much a flop.

And the worst part is that I still have stress dreams about math classes.  I'm back at college, and I realize that (1) I have a major exam in math that day, and (2) I have no idea how to do what I'll be tested on, and furthermore (3) I haven't attended class for weeks.  Sometimes the dream involves homework I'm supposed to turn in but don't have the first clue about how to do.

Keep in mind that this is 35 years after my last-ever math class.  And I'm still having anxiety dreams about it. 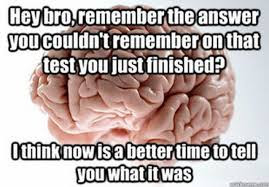 What the researchers at UCLA did was to track students who were in an advanced calculus class, keeping track of both their grades and their self-reported levels of stress surrounding the course.  Their final exam grades were recorded -- and then, two weeks after the final, they were given a retest over the same material.

The fascinating result is that stress was unrelated to students' scores on the actual final exam, but the students who reported the most stress did significantly more poorly on the retest.  The researchers call this "motivated forgetting" -- that the brain is ridding itself of memories that are associated with unpleasant emotions, perhaps in order to preserve the person's sense of being intelligent and competent.

"Students who found the course very stressful and difficult might have given in to the motivation to forget as a way to protect their identity as being good at math," said study lead author Gerardo Ramirez.  "We tend to forget unpleasant experiences and memories that threaten our self-image as a way to preserve our psychological well-being.  And 'math people' whose identity is threatened by their previous stressful course experience may actively work to forget what they learned."

So that's today's journey through the recesses of the human mind.  It's a fascinating and complex place, never failing to surprise us, and how amazing it is that we are beginning to understand how it works.  As my dear friend, Professor Emeritus Rita Calvo, Cornell University teacher and researcher in Human Genetics, put it: "The twentieth century was the century of the gene.  The twenty-first will be the century of the brain.  With respect to neuroscience, we are right now about where genetics was in 1917 -- we know a lot of the descriptive features of the brain, some of the underlying biochemistry, and other than that, some rather sketchy details about this and that.  We don't yet have a coherent picture of how the brain works.

"But we're heading that direction.  It is only a matter of time till we have a working model of the mind.  How tremendously exciting!"
Posted by Gordon Bonnet at 1:56 AM