New from the Wishful Thinking Department, we have a woman in Newfoundland who snapped a photograph of what she says is a polar bear praying.

"When I saw it and started taking pictures, I was blown away," says Jessica Andrews, who owns Ocean View Photography.  "I didn't realize I'd taken the picture until I started going through them...  When I edited them, I saw after that he was by the cross.  This is the one that people were commenting on and saying that, 'He's praying,'"

The story and the photo have been shared tens of thousands of times on social media, mostly by people who think that the bear has found Jesus or something.

Without further ado, let's take a look at the photograph in question: 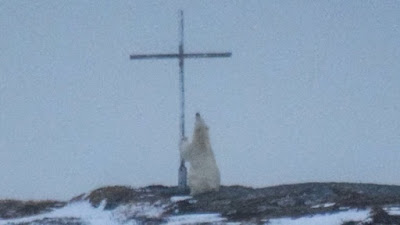 Here's a smattering of responses I've seen since the story first hit:
Okay, all piety and good intentions aside, can we just establish a couple of things, here?

This is a polar bear.  It is not praying, it is not the tame denizen of "paradise on earth," and it is not giving thanks.  Just because someone captured it in what looks like a kneeling position does not mean that it has "faith in god."

And, for fuck's sake, it is not a "little bear praising Jesus."  This is a huge and dangerous animal that is a member of one of the few species on Earth that will actively stalk, attack, and kill humans for food.  In the next shot Andrews took -- which you can see posted on the link provided above -- the bear has turned and is looking right at her with an expression that seems to say, "Hmm.  She looks kind of tasty."

So maybe before, the bear was saying Grace Before Meals.  I dunno.

I am certainly understanding of our desire to extract inspiration from the natural world.  Hell, I'm a biology teacher; I'm immersed on a daily basis in the amazing, wonderful world of living things that we share the planet with.  But my awe is tempered by a very certain knowledge that the other species around us are, by and large, completely indifferent to us, our social and cultural conventions, and so on.  Any time we impress upon non-human species some sort of human intention -- courage and majesty in a howling wolf, freedom in an eagle, sneakiness and cunning in a weasel, and so on -- we're on seriously shaky ground.  Whatever sort of emotional state other species exist in, it is almost certain to be pretty different than anything we experience.

Myself, I'd rather learn as much as I can about the living things around me, and experience the wonder and complexity of the Earth through actual knowledge and understanding than to settle for imposing my flawed human interpretations on what the animals around me are doing.  It's more honest, and in the long run, it is way cooler.

On the other hand, I'm absolutely convinced that my dog understood every word I was saying this morning when I explained to him why I wasn't going to give him a second bowl full of dog chow.  So I guess it's all a matter of what you choose to accept.
Posted by Gordon Bonnet at 2:08 AM