The disappearance of Bruno

UFO enthusiasts are currently in a tizzy over the disappearance last week of a university student from Rio Branco, Brazil, who left behind a bizarre video about 16th century philosopher, scientist, and theologian Giordano Bruno and a room whose walls are covered with esoteric symbols.

The student's name is Bruno Borges (I wondered if his first name was in honor of Giordano, or whether it was a coincidence; of course, in the minds of the UFO conspiracy theorists, nothing is a coincidence).  He apparently had a reputation as being a bit of an odd duck even prior to his disappearance.  He was obsessed with aliens, and his fascination with the earlier Bruno came from the fact that the Italian philosopher/scientist was one of the first to speculate that other planets -- even planets around other stars -- might harbor life.  Borges hinted that Bruno's execution at the hands of the Inquisition was to keep him silent about the reality of aliens, when in reality it was just your average charges of heresy.  The church made eight accusations, claiming that Bruno was guilty of:

I suppose it's understandable that Borges thought Bruno was a pretty cool guy.  A lot of us science types do, although that admiration might be misplaced.  Hank Campbell writes over at The Federalist:

Bruno only agreed with Copernicus because he worshiped the Egyptian God Thoth and believed in Hermetism and its adoration of the sun as the center of the universe.  Both Hermes and Thoth were gods of…magic.

The church and science did not agree with Bruno that pygmies came from a “second Adam” or that Native Americans had no souls, but they were also not going to kill him over it.  There is no evidence his “science” came up at any time.  He was imprisoned for a decade because the church wanted him to just recant his claims that Hermetism was the one true religion and then they could send him on his way.  When he spent a decade insisting it was fact, he was convicted of Arianism and occult practices, not advocating science.

So right off, we're on shaky ground, not that this was ever in doubt.  In any case, between Borges's devotion to Bruno and his fascination with aliens, he apparently went a little off the deep end.  He left behind over a dozen bound books, mostly written in code, and only a few of which have been deciphered.  Here's a sample passage from one of the ones that has been decrypted:


It is easy to accept what you have been taught since childhood and what is wrong.  It is difficult, as an adult, to understand that you were wrongly taught what you suspected was correct since you were a child.  In other words, if you fit into the system, your behaviour will be determined, making you at the mercy of beliefs already provided and well established in dogmas and rituals, with the masses.

Which is standard conspiracy theory fare.  He wouldn't tell his parents or his sister what he was up to, only that he was working on fourteen books that would "change mankind in a good way."  Besides the symbols painted on his walls, he also had a portrait of himself next to an alien: 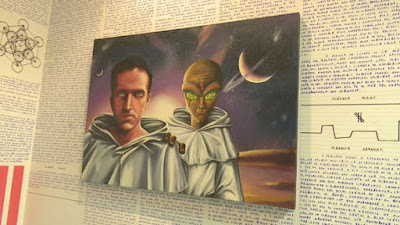 Borges's apartment wall, showing the symbols, writing, and the portrait of him with a friend

Borges has now been missing for over a week, and his family is understandably frantic.  The UFO/conspiracy world is also freaking out, but for a different reason; they think that Borges knew too much (in this view of the world, people are always "finding out too much" and having to be dealt with), and either the people who don't want us to know about aliens, or else the aliens themselves, have kidnapped him.

But the whole thing sounds to me like the story of a delusional young man whose disappearance is a matter for the police, not for Fox Mulder and Dana Scully.  It's sad, but I'm guessing that aliens had nothing to do with it.  Of course, try to tell that to the folks over at the r/conspiracy subreddit, where such a statement simply confirms that I'm one of "the two s's" -- sheeple (dupe) or shill (complicit).  I'll leave it to wiser heads than mine to determine which is most likely in my case.
Posted by Gordon Bonnet at 3:11 AM