The Oxford Dictionary word of the year for 2016 was "post-truth."

The OED defines "post-truth" as "relating to or denoting circumstances in which objective facts are less influential in shaping public opinion than appeals to emotion and personal belief."  So here we are using the prefix "post" not to mean "following in time sequence" but "after the point where it becomes irrelevant."

The fact that this term was even coined is unsettling.  Have we really come to a place where demonstrable truth is less important than belief?  Where Daniel Patrick Moynihan's trenchant quip, "You are entitled to your own opinion, but you are not entitled to your own facts" is not argued against so much as it is ignored into nonexistence?

Unfortunately, the answer to both of these questions appears to be "yes."  This is the alarming conclusion of research done by University of Washington professor Kate Starbird, of the Department of Human-Centered Design and Engineering, who decided to study how people use social networks to respond to disasters and ended up uncovering something deeply disturbing about our society.

Starbird's research started after the Boston Marathon bombing of April 2013.  She was sifting through tweets that followed the attack, and noticed that there were the expected calls for help and outcries by worried family members about the safety of their loved ones, but there was something else, something considerably darker.

"There was a significant volume of social-media traffic that blamed the Navy SEALs for the bombing," Starbird said, in an interview with Danny Westneat of the Seattle Times.  "It was real tinfoil-hat stuff.  So we ignored it."

She began to realize her error when she did the same sort of analysis of subsequent disasters.  "After every mass shooting, dozens of them, there would be these strange clusters of activity," Starbird said.  "It was so fringe we kind of laughed at it...  That was a terrible mistake.  We should have been studying it." 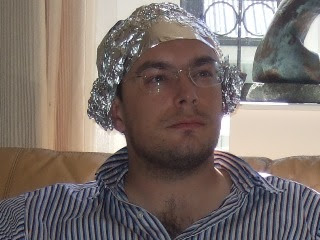 So she threw herself into a study of the networks on the internet that involve conspiracy theorists and conspiracy websites -- InfoWars, Before It's News, NewsBusters, NoDisinfo, the misleadingly-named Veterans Today, and hundreds of others.  And what she found was horrifying; these interconnected webs of misinformation and bizarre speculation form a powerful force for spreading their message -- one that rivals the power of legitimate media.

"More people are dipping into this stuff than I had ever imagined," Starbird said, noting that InfoWars alone gets the same web traffic as the Chicago Tribune.

Interestingly, the websites she's studying don't follow any kind of definitive political alignment.  InfoWars, for example, is right-wing; The Free Thought Project is left-wing.  Instead, the unifying theme is anti-globalism and xenophobia, which can manifest irrespective of political leaning.

"To be antiglobalist often included being anti-mainstream media, anti-immigration, anti-science, anti-U.S. government, and anti-European Union," Starbird said.  And that can appeal to both sides of the political spectrum.

The most frightening thing of all is how insulated this network is from the truth.  Since there are now hundreds of these sites, the usual mantra -- cross-check your sources -- doesn't help you much.  "Your brain tells you ‘Hey, I got this from three different sources,’ " she said.  "But you don’t realize it all traces back to the same place, and might have even reached you via bots posing as real people.  If we think of this as a virus, I wouldn’t know how to vaccinate for it."

Which supports a contention I've had for years; once you've trained people to doubt facts, deluded them into thinking that the raw data has spin, you can convince them of anything.  After that, everything they look at is seen through the lens of suspicion, as if the information itself had an agenda, was trying to pull the wool over their eyes.

And I'm as at a loss as Starbird is about how to combat it.  Yes, teach critical thinking and media analysis in schools; yes, harp on comparing your sources to known reliable media before you tweet or post on Facebook.  But this spider's web of interconnected sites is remarkably well-insulated from attack.  Anyone who contradicts the party line is either a dupe or a shill; either they've "drunk the KoolAid" (to use the conspiracy theorists' favorite line) or they've actively sold out to the other side.

Once you've accepted that, there's no way out.

"I used to be a techno-utopian," Starbird told Westneat.  "Now I can’t believe that I’m sitting here talking to you about all this...  My fear is that we may be headed toward the menace of unreality — which is that nobody believes anything anymore... Alex Jones is a kind of prophet.  There really is an information war for your mind.