The power of ritual

Since leaving religion when I was in my early 30s, I've found that one thing I've kind of missed is taking part in a ritual.

It's not that I don't enjoy sleeping in on Sunday mornings, or that I miss the specific rituals I participated in while in church.  It's more that there's something comforting about being part of a group that is all doing the same thing, and for which membership in the group involves understanding the context of how the ritual works.

It's amazing how powerful this can be.  Other than my parents' funerals and the wedding of a friend, I haven't sat through a Catholic mass since I was about twenty.  Even so, I bet if I did decide to head on over to St. James Catholic Church next Sunday, I'd know exactly what to do when, and I probably could remember the order of mass, the words to the prayers, and even the lyrics for some of the hymns.

All of this comes up because of a paper (currently in press) by Nicholas M. Hobson, Francesca Gino, Michael I. Norton, and Michael Inzlicht called "When Novel Rituals Impact Intergroup Bias: Evidence from Economic Games and Neurophysiology" (the link is to a pre-release copy) that gives us an idea why rituals are so important -- and so ubiquitous in human cultures.

The researchers were trying to find out if getting people to do stereotypical and repetitive actions could alter their perception of belonging in a newly-formed group, and also whether those actions might cause them to change their behavior toward people who had not participated.  Here's an example of one of the rituals Hobson et al. came up with for their participants to perform:
So kind of silly, but honestly, is it any odder than a lot of the rituals we participate in without any question?

So they got the "ritual group" to perform the steps at least three times a week.  Afterwards, they were mixed in with the "no-ritual group" -- people who had been given a task to estimate the number of dots in an image, rather than participating in the ritual.  They were then paired up and participated in a famous psychological experiment called the "Trust Game:"

If player 1 (sender role) sends player 2 (receiver role) all of their $10 endowment, this $10 amount becomes tripled upon being received by player 2 ($30).  In the second exchange (which did not actually occur, but participants were lead to believe that there was a second play), player 2 is then given the option to reciprocate the offer and send any amount of the $30 back to Player 1.  A perfectly cooperative exchange would be player 1 fully trusting player 2 (sending entire $10) to fairly reciprocate the offer (signaling their trustworthiness) by splitting the $30, $15 to each player.  Participants understood that in order to gain more than their original endowment, they would need to trust player 2 with a certain amount; the more money sent to player 2, the higher this individual payout, but the greater the risk of the endowment being lost.

What I find most interesting about this is the fact that the ritual the people were performing was pointless and absurd, and the participants knew it was meaningless -- and yet it still impacted their behavior.  How much more of an effect does this have when the rituals are perceived as meaningful?  Or not just meaningful, but essential for the salvation of a person's soul?

And how might this not only affect our interactions with other members of the ingroup, but how we treat people in the outgroup? 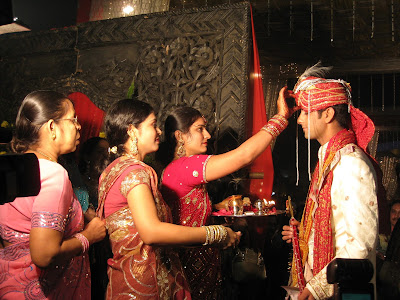 What all of this indicates is that however modern we perceive ourselves to be, our brains still function in the context of tribalism.  And while this has the beneficial effects of increasing group trust and coherence, it makes us prey to the worst of what humanity can do -- mistreatment and mistrust of those who we see as different.  As Hobson et al. put it:


Cultural stabilization of ritual began in human evolution when fast-growing groups began to experience elevated intergroup competition, necessitating ingroup cooperation...   In line with these theoretical claims, the current results partially support the claim that rituals offer a strategy for the regulation of ingroup behavior – but at a detriment to the outgroup.

Which makes me wonder if my missing the rituals I participated in might have a more deep-seated source than I realized.  Almost makes me want to go genuflect in front of a statue of a saint, or something.
Posted by Gordon Bonnet at 2:01 AM