We have nothing to fear but...

It's become increasingly apparent to me, over the seven years I've written here at Skeptophilia, that most of the time people think with their guts and not with their brains.

Even the most cerebral folks can find themselves swayed by their emotions.  I like to think of myself as logical and rational, but many's the time I've had to stop, and turn slowly and deliberately away from my instinctive, knee-jerk reaction, and say, "Okay, wait.  Think about this for a minute."

Which is why I found the results of a survey done by Chapman University, released last month, so simultaneously fascinating and alarming.  The survey asked the question "what are you most afraid of?", and asked respondents to elaborate on that fear -- the specifics, causes, and any subcategories that might be applicable.  It also asked what things they believed in for which they had no concrete evidence.

Here are a few of the most interesting results:


46.6% believe places can be haunted by spirits
39.6% believe that Atlantis, or something like it, once existed
27% believe that extraterrestrials have visited Earth in our ancient past
24.7% say aliens have come to Earth in modern times
13.5% believe that Bigfoot is real

But it's when you get to the conspiracy theories that things get really strange. Here are the percentages of people who believe the government is covering up information about...

I suppose I should find it heartening that at least 4 in 10 Americans think the government is covering up the evidence for global warming, because at the moment, they kind of are.  But that optimism is tempered by the fact that 5 in 10 still have their knickers in a twist about JFK, and 3 in 10 think that HIV is some kind of government plot. 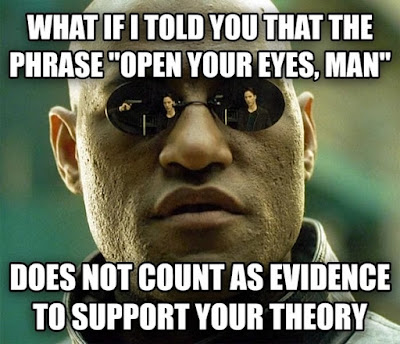 Of course, it's clear where at least some of this comes from; the This Is No Longer Even Remotely Connected to History Channel is probably responsible for the majority of the Atlantis and extraterrestrial visitation bullshit, and belief in ghosts and spirit survival have been with us for as long as humanity has considered such things.  President Trump certainly bears most of the responsibility for the Obama birth certificate nonsense, and Breitbart is the origin of the claim that there was anything more to Scalia's death than an overweight 79-year-old dying of a heart attack.

Oh, but I forgot to mention: 19.1% of respondents believe in telekinesis, and 14.1% think that astrology and other types of fortune telling are accurate and scientifically supported.  Although now that I come to think about it, if someone had asked me to estimate the last one, I'd probably have guessed that it was higher, so I suppose that's something to be glad about.

The scary part of all of this goes back to what I started with; that people are much more likely to be swayed, even on important topics, by their emotions and not by their brains.  Some of the beliefs that the survey investigated are harmless enough; I doubt anyone ever came to grief by believing in Bigfoot, for example.  But freaking out over a one-world government -- a major concern of a third of the respondents -- could certainly affect the way people vote.

But on a deeper level, it's troubling that so many people admit to deep-seated beliefs that fly in the face of the evidence.  Believing in Atlantis may not be a big deal, in the grand scheme of things.  But the fact that someone -- in fact, 4 out of every 10 someones -- is willing to accept a counterfactual proposal in the complete absence of evidence indicates their susceptibility to falling for other, more insidious ideas.

So we're back to where we often land; it's imperative that we teach children how to evaluate evidence and think critically.  It's also important to ask, "Why do you believe that?"  It's not easy to pry people away from loony claims to which they have subscribed based on emotion and gut reaction -- but it's pretty important, especially considering how many loony claims are out there and how important it is for people to base their conclusions on the facts.
Posted by Gordon Bonnet at 2:11 AM