I was discussing the alleged phenomenon of hauntings with one of my students, and he said, "There's one thing I don't understand.  Some people believe that the souls of humans can survive after death, and become ghosts.  If humans can become ghosts, why can't other animals?"

Well, after pointing out the obvious problem that I'm not really the right person to state with authority what a soul, human or otherwise, could or could not do, I mentioned that there are many cases of supposed hauntings by animals.  The most famous of these is the haunting of Ballechin House in Scotland. 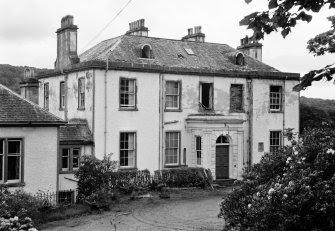 Ballechin House was a beautiful manor house, built in 1806 near Grandtully, Perthshire, Scotland, on a site that had been owned by the Stuart (or Stewart or Steuart or Steward, they seemed to spell it a new way every time the mood took them) family since the 15th century.  The story goes that a scion of this family (sources seem to point to his being the son of the man who had the house built), one Major Robert Steuart, was a bit of a wacko who had more affection for his dogs than he did for his family.  That said, he provided quarters for his sister Isabella, who was a nun -- I'm not sure why she wasn't living with her fellow sisters in a convent, but some claim that it was because she'd had an illegitimate child and gotten herself, um... de-habited?  Anyhow, she lived with them for a time, finally dying and being buried on the property.  As for Major Steuart, he apparently took enough time away from his dogs to marry and have at least one child, John.

As the Major got older, he got more and more peculiar, and finally started claiming that after he died he was going to be reincarnated as a dog.  One runs into these ideas pretty frequently today, but back then, it must have been a sore shock to his nearest and dearest.  So this partly explains why when the Major did go to that Big Dog Kennel In The Sky, his son John rounded up all of the Major's dogs and shot them.

I say "partly" because I fail to understand how, even if you believed that the Major was going to be reincarnated as a dog, killing dogs that were currently alive and therefore presumably none of whom were actually the Major would help.  But that's what he did.

And boy was he sorry.

Almost immediately thereafter, John Steuart and his family and servants began to experience spooky stuff.  They heard doggy noises -- panting, wagging of tails, sniffing, and the really nasty slurping sounds dogs make when they are conducting intimate personal hygiene.  (Okay, I'm assuming that they heard that last sound.  I certainly hear it enough from my own dogs.)  Steuart's wife several times felt herself being pushed by a wet doggy nose, and reported being in a room and suddenly being overpowered by a strong doggy smell.

Other apparitions began -- the sighting of a ghostly nun, all dressed in gray, in the garden; doors that would open and close by themselves; and the sound of limping footsteps (the Major apparently walked with a limp).  John Steuart himself was not long to worry about them, because he was killed in an accident, supposedly the day after hearing a knocking sound on the wall.  (Maybe it was a coded message from the Major that meant, "The dogs and I can't wait to see you!")

In the 1890s the hauntings were investigated on the urging of a certain Lord Bute -- I can't figure out whether by that time Bute was the owner of the house, or just a busybody.  Thirty-five psychics descended upon the house, which created such a cosmic convergence of woo-wooness that you just know something was gonna happen.  And it did.  A Ouija board spelled out "Ishbel" (recall that Major Steuart's sister who was a sister was named Isabella, and recall also that this entire family seemed to have difficulty with spelling their own names).  The psychics experienced various doggy phenomena; one of the psychics, who had brought her own dog along, reported that one evening her dog began to whimper, and she looked over, and there were two disembodied dog paws resting on the bedside table.  (I'd whimper, too.)

In the interest of honesty, it must be recorded that the house was let several times during this period, once to a Colonel Taylor who belonged to the Society for Psychical Research. Taylor's diary records, with some disappointment, that he slept in the Major's bedroom on more than one occasion, and experienced nothing out of the ordinary.  The Society itself is dedicated to researching psychic phenomena through a skeptical and scientific lens, so maybe that was enough to frighten all the spirits off.

Be that as it may, Ballechin House acquired the reputation of being "the most haunted house in Scotland," and by the 1920s became impossible to rent.  It fell into increasing disrepair, and finally was torn down in 1963.  I think this is a little sad -- I'd have loved to visit it.  I might even have brought my dogs. Of course, I'm not sure how useful they'd be in the case of a haunting, even if the ghosts were other dogs.  Grendel is, to put not too fine a point on it, a great big wuss, and if disembodied doggy paws ended up on the bedside table in the middle of the night, he'd be under the covers with me in a flash.  My coonhound Lena, on the other hand -- and I mean this with the utmost affection -- has the IQ of a loaf of bread.  By the time her sensory organs sent the message "Ghost!" to her tiny, candy-corn-sized brain via Pony Express, the spirit would probably have given up and found something smarter to haunt, such as a house plant.

In any case, if you are to take the Ballechin House situation as a representative sample, most believers in Survival seem to think that dogs have an eternal soul.  However, this opens up a troubling question.  Why stop there?  If dogs have an eternal soul, do cats?  (Most of the cats I've met seem to be cases more of demonic possession, frankly.)  How about bunnies?  Or weasels?  Or worms?  Or Japanese beetles?  (I'd be willing to believe that if there are gardens in hell, there'll be Japanese beetles there to eat the roses.)  I find this a worrisome slippery slope.  It may be a cheering thought that something of Woofy's nature will survive his demise, even if he terrorizes the guests with "sudden overpowering doggy smell," but I'm not sure I want to be stung by ghostly yellowjackets, or have to spray my plants for ghostly aphids.  The real kind are enough of a problem.
Posted by Gordon Bonnet at 2:55 AM