If you've heard of Gaius Julius Augustus Germanicus, it's probably under his better-known nickname of "Caligula" ("Little Boots"), given to him when he was a child and demanded to have a set of boots like the military officers had, so he could go stomping around giving orders.  While such behavior is at least arguably cute in a kid, it becomes decidedly less so when said kid grows into an adult and continues to do the same sort of thing.

And it becomes downright scary when such an adult toddler ends up in charge of a whole nation. 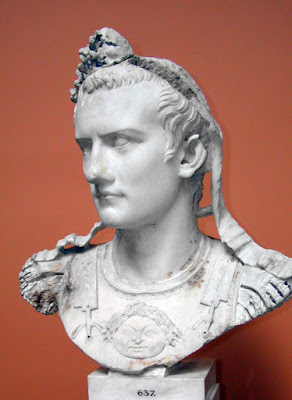 Caligula became the ruler of Rome upon the death of his great-uncle Tiberius in March of 37 C.E.  It'd be nice if people like him (i.e. sociopathic narcissists) suddenly had an epiphany when they found themselves in a position of responsibility, but that seldom if ever happens.  In fact, it's often the opposite.  When they gain power, it takes the brakes off entirely.  In his short reign -- only three years, ten months -- here are a few things Caligula did:
And that's only scraping the surface.  The man was, to put it bluntly, a nutjob, and it is honestly a mystery why the Roman people put up with him for almost four years.

I mean, you'd think the self-laudatory stuff would wear thin pretty quick, especially since the guy was far more interested in self-aggrandizement than he was in running the country.  Every speech he made did nothing but heap praise upon his own head; "No one," he said at one meeting of his inner circle, "has done more [for the country] than I have."  And instead of laughing directly into his face, all of the people in attendance just kind of nodded sagely, as if that was actually the truth.  To add insult to injury, he then demanded that each of his counselors speak in his praise -- and they did.  For example:
Oh, wait!  My bad.  That last bit wasn't Caligula, that was Donald Trump's last Cabinet meeting, which accomplished nothing than stroking the president's turgid ego.  (If you're curious, the quotes above are, in order: Vice President Mike Pence; Secretary of Labor Alexander Acosta; Secretary of Agriculture Sonny Perdue; Chief of Staff Reince Priebus; Secretary of Housing and Urban Development Ben Carson; and Secretary of Treasury Steve Mnuchin.)

As far as Trump himself, he was just tickled pink to receive all the adulation, because as we all know there's nothing as wonderful to receive as forced praise.  Trump ended the meeting on another self-congratulatory note -- about the only note he knows how to play, apparently -- saying, "I will say there never has been a president, with few exceptions -- in the case of F.D.R. he had a major depression to handle -- who's passed more legislation, who's done more things than what we've done.  We've been about as active as you can be, and at a just about record-setting pace."

Which, of course, ignores the fact that both his budget and his attempted revamp to health care are in serious danger, he and his cronies are under investigation for various sorts of malfeasance, and about all that he's done other than that is playing golf every weekend, turning the United States into an international laughingstock with ignorant gaffe after ignorant gaffe, and issuing executive orders dismantling every environmental protection ever passed.

You can't continue fooling people forever, though, and eventually even the ass-kissers get tired of the thankless (and potentially dangerous) job of working for a lying, amoral megalomaniac.  In the case of Caligula, the powers-that-be finally had enough, and there was a conspiracy between the Senate and the Praetorian Guard.  One evening Little Boots was caught unawares in a corridor beneath one of his palaces on the Palatine Hill, and a bunch of the conspirators hacked him to death with swords.

One has to hope that eventually there will be enough of our elected officials who see Donald Trump for what he is that they'll be willing to use the metaphorical sword of impeachment based upon his obvious lack of fitness for leadership (if not for obstruction of justice, collusion with the Russians, or outright treason).  It took almost four years for the Roman Senate to say finis to Caligula; let's hope that we don't have to wait that long for our own American Caligula to be deposed.
Posted by Gordon Bonnet at 2:02 AM